If your theory explains the evidence does that mean it is probably correct? If “everything fits”, is your theory therefore surely right?

There’s a problem with that way of thinking and it is taken head-on by Paul Newall in a chapter titled “Logical Fallacies of Historians” in Tucker and Kane’s A Companion to the Philosophy of History and Historiography. 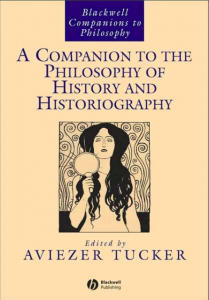 Affirming the consequent is a formal fallacy occurring when one or more potential premises are omitted from an argument. For example, “if my rain dance worked then it should be raining; it is raining; therefore, my rain dance worked.” Here other possible causes of the rainfall are left out and the argument fails. Affirming the consequent has the general form:

Some of you may know of a 1970 “classic” by David Hackett Fischer, Historians’ Fallacies: Toward a Logic of Historical Thought. Newall acknowledges the strength of Fischer’s work but in a single chapter is addressing what he sees as the most common and unfortunately enduring fallacies among historians.

So how can one guard against being overcome by this fallacy? Newall continues:

However, we can add missing premises to show the error:

. . . and so on. For an argument of this form to not be fallacious, we would need an additional premise stating that A is the only possible cause of B. (Note that affirming the antecedent (or modus ponens) is not fallacious; that is, arguing “if A then B; A; therefore, B.”)

This fallacy is of considerable importance to historiography

This fallacy is of considerable importance to historiography because it often forms the basis of models of confirmation and shows why a more sophisticated philosophical apparatus is required. A typical statement might be: “if our model/explanation of x [some event, say] is correct, we would expect to find y [some evidence, records or traces, for instance], as indeed we do.” Thus an account of some historical episode predicts that certain evidence of it will be found, and when this happens the account is confirmed or demonstrated to be correct. However, in this form the account is straightforwardly fallacious as an example of affirming the consequent.

if Einstein were an extraterrestrial of superior intelligence, he should have made incredible intellectual achievements

For example, if Einstein were an extraterrestrial of superior intelligence, he should have made incredible intellectual achievements. He did, and therefore he was an extraterrestrial. We can attempt to undercut this objection by arguing that actually the evidence only makes the account more likely, but this requires further elaboration before it becomes philosophically tenable, for example by comparing different hypotheses with different prior probabilities (see Tucker 2004, for an example of a Bayesian approach that avoids this difficulty).

I’ve been trying to think through some other examples. Here are a few. Two political ones to start followed by some biblical ones, including some mythicist examples.

P1: If people have a Trump Derangement Syndrome then they will criticize Trump

C: therefore those critics have TDS

P1: If the Chinese Communist Party conspired to mislead the world on the coronavirus impact then the figures they released would contain anomalies

P2: The figures released by the CCP have contained anomalies

C: therefore the CCP has conspired to mislead the world on the coronavirus impact

P1: If the historical narratives in the Bible are basically true then we should find archaeological evidence pertaining to those events and persons;

C: therefore the historical narratives in the Bible are basically true

P1: If bible prophecies were true, then we would see the events they predicted happened;

P2: we see the events prophesied did happen,

C: so the prophecies were true.

Historical evidence for the historical Jesus

P1: If Jesus existed then we would expect to find mention of him in ancient historians

P2: we find mentions of Jesus in works of ancient historians

Biblical evidence for the historical Jesus

P1: If a historical Jesus had a brother who held a leadership position in the early church then we would find some indication of that in the early documents

P2: we find a statement in Galatians that Paul met Jesus’ brother

C: therefore a historical Jesus had a brother.

Historical proof for the historical Jesus

P2: we see worship of him even at the expense of Jewish traditions

C: therefore Jesus was a most astonishingly extraordinary historical person . . . .

P1: If the baptism and crucifixion of Jesus were embarrassing events but very well known and unable to be denied then they would be described in some form in the earliest records

P2: The baptism and crucifixion of Jesus are described in the earliest records

C: therefore the baptism and crucifixion of Jesus were embarrassing events but very well known and unable to be denied

P1: If Jesus were a myth then we would find the gospels full of myths

P2: the gospels are full of mythical tales

C: therefore Jesus is a myth

P1: If Christianity originated as a form of astral worship then we would be able to discern astral allusions and motifs in the gospels

P2: we can see astral allusions and motifs in the gospels

C: therefore Christianity originated as a form of astral worship

Others? Feel free to add some. My brain needs a break.

Newall, Paul. “Logical Fallacies of Historians.” A Companion to the Philosophy of History and Historiography, edited by Aviezer Tucker and Mary Kane, Wiley-Blackwell, 2009, pp. 262–73.

13 thoughts on “Logical Fallacies of Historians: “If It Fits — Be Careful!””