From The Loudest Voice in the Room by Gabriel Sherman:

“By this point, Ailes (founder of Fox News) was soaking up multiple influences. Kenny Johnson recalled one conversation in Ailes’s office about the power of propaganda. Like Ailes, Johnson loved the theater. He had performed in high school plays and studied directing at Carnegie Tech, where he had become fascinated by the Nazi propaganda films of Leni Riefenstahl, especially Triumph of the Will and Olympia. “I was blown away,” Johnson remembered. “I had an enormous hatred of Hitler, but when I saw Triumph of the Will, you find yourself thinking, ‘Wow, he’s pretty cool—no, wait, I hate these guys.’ ” Ailes told Johnson that he too was a big fan of Riefenstahl. “He thought her work was brilliant,” Johnson said. They talked about “how she made different versions of the films for different countries not only to aggrandize the Nazis but to throw a bone to the other folks.” Ailes was especially taken by Riefenstahl’s use of camera angles. “There’s so many subtle things you see in propaganda,” Johnson said. “If you put the camera below a subject’s eye height, it’s the ‘hero shot.’ It gives him dominance. We talked about the psychological impact of the placement of the camera.” 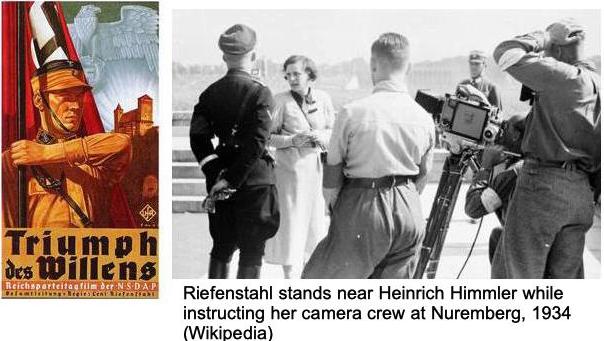