Recall the Gospel of Matthew’s portrayal of Jesus delivering a parable of the sheep and the goats at the last judgement: Matthew 25:31-41. Now that’s a parable with a message about good works and no hint of any need to believe in Jesus or the saving grace of Jesus’ death and resurrection. What are we to make of this parable? Here is Bart Ehrman’s view:

What is striking about this story, when considered in view of the criterion of dissimilarity, is that there is nothing distinctively Christian about it. That is to say, the future judgment is not based on belief in Jesus’ death and resurrection, but on doing good things for those in need. Later Christians—including most notably Paul (see, e.g., I Thess. 4:14-18), but also the writers of the Gospels—maintained that it was belief in Jesus that would bring a person into the coming Kingdom. But nothing in this passage even hints at the need to believe in Jesusper se . . . . It doesn’t seem likely that a Christian would formulate a passage in just this way. The conclusion? It probably goes back to Jesus.

Such an argument demonstrates the power of later “orthodox” Christianity to guide the vision and judgment of a modern scholar. Ehrman relies upon the writings of Paul’s “genuine letters” and the canonical gospels to define his view of what was Christian “tradition”, even how to define Christianity.

It is all too easy to overlook the noncanonical literature that also sheds light on earliest Christianity and at the same time to forget that Paul was a disruptive presence, a most controversial figure, among other early Christians — as his own letters testify.

Another early writing from around the same time as the Gospel of Matthew is the Didache. The Didache purports to be a message by “the twelve apostles to the nations” and it at not point indicates any interest in, or even knowledge of, Jesus as a crucified figure. The eucharist is an important instruction in the Didache but it is a thanksgiving meal without any suggestion of association with a sacrament commemorating the death of Jesus.

Other scholars have also noted Q’s absence of interest in a crucified Jesus.

So to make a judgement that a saying in a gospel is not “distinctively Christian” because it does not conform to Paul’s preaching is to limit one’s view of the landscape of earliest Christianity.

It may even be of interest to note how one scholar sees the relationship between the Gospel of Matthew and the Didache: 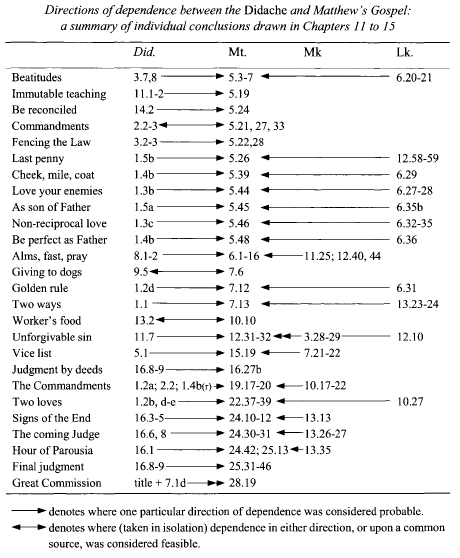