Still stranded here at Kuala Lumpur airport (though I’ve had a few opportunities to escape and check out the city itself) and now late at night checking up on mail, blog comments, etc, and I see again various views (see the comments on The First Gospel: History or Apocalyptic Drama) on what might be the “name above all names” that we read about in Philippians 2:9-10

Therefore God also has highly exalted Him and given Him the name which is above every name, 10 that at the name of Jesus every knee should bow . . . .

While waiting here in KL for my flight to Thailand I have been catching up with rss feeds from all over the place and one stood out as timely and appropriate: What The West Can Learn From Thailand About Loving One’s Heritage by Casey Chalk. Unfortunately it’s from The Federalist site whose articles I normally find way too “conservative” for my own tastes, but it does make some substantial points about Thailand that are worth noting.

Since the story of the Thai students trapped in a remote cave hit the international news wire, observers have been fascinated with the children’s expression of Thai religious piety and customs. Videos released by the Thai navy show the boys offering the “wai,” a traditional greeting where the palms are pressed together. Images that accompany related news stories often show large groups of Thais, including their classmates, offering Buddhist prayers for the stranded children.

The first time I was in Bangkok and greeted by two Thai nieces with the wai I gaffed by wai-ing back. It is not appropriate, I quickly learned, for the senior to wai the junior, or certainly not to bow in doing so. There are all sorts of rules about that.

Tourists visiting Thailand are usually taken aback by the signs prominently displayed at Suvarnabhumi Airport and on billboards along the highway into downtown Bangkok. One such billboard reads: “It’s wrong to use Buddha as decoration or tattoo. Means no respect. Don’t buy or sell Buddha.” Another sign asserts: “Welcome to Buddha Land. It’s wrong to buy or use Buddha symbol as merchandise, decoration, tattoo or to own Buddha head. Disrespect to Buddha is wrong by law.”

Thais are a very conservative people and the Buddhist religion runs deep. It is customary for boys to spend time as monks just as it is customary for young men to do “national service” in some other countries. I find Buddhism easier to stomach than western “Churchianity” but don’t think Buddhism is all the same here. There are serious corruption charges under way against certain Buddhist monks under way. Some monks come across as plain greedy. But those appear to be the extremes. As usual there is the vast middle of normality and by-and-large respectability.

Families are bound by values Westerners would regard as old-fashioned. It is not universally accepted, for example, that young people live together before marriage. For a young person to do so could well cause deep pain, even offence, to many parents.

Reverence for the Thai monarchy has been bound up with Buddhist conventions, too. I can discuss that side of things another time in more depth. Not everything connected with that question is a good thing.

Oh yes — when you go to a movie here in Thailand you will experience just before the main feature the playing of national anthem and a film of the king. Everyone stands, of course.

Casey Chalk talks about the infamous sex tourism but it is very easy to live and get around in Thailand without seeing that side of things at all.

I’m not sure I’d think of certain Western differences from Thai culture as “losses” as Chalk goes some way to suggesting. The “traditional ways” have their own challenges. There’s way too much poverty here and I can’t justify the status quo by appealing to (or hiding behind) “unifying traditions”.

It doesn’t really work to compare values or social attitudes between different cultures as if there can be neat correspondences. Example: I’ve talked above about the ‘conservatism’ of the Thais but I would despite the West’s gains in acknowledgement of gay rights I still would not expect to walk into a very ordinary hairdresser shop in a major conservative-area suburban-type shopping mall and be attended by a ladyboy.

Right now I’m in transit between Australia and Thailand and as much as I hate flying I do love the experience of exploring new places — like today’s walks around the historical area of Kuala Lumpur, the national mosque, and seeing for the first time truly appropriate signage on those pull-push doors. For about the first time I can remember I had no trepidation over the embarrassment of getting the two mixed up as I approached. 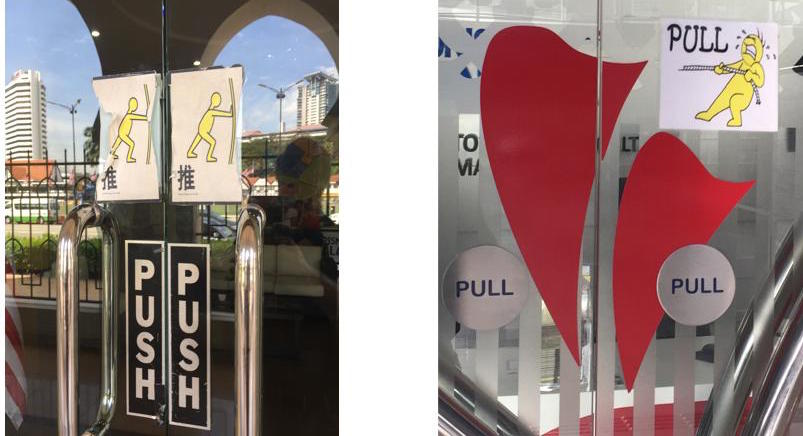 Around this time last year I was in the UK and one place I could not pass up was Liverpool. I was 50+ years too late, though, so the stars were fossilized in bronze…