Many aeons ago I was a member of a strict religious cult that taught makeup originated with harlots and therefore wearing it was a sin against God that could condemn one to annihilation in the Book of Revelation’s Lake of Fire: 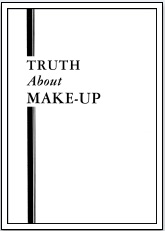 Most women, when asked WHY they use lipstick, will, of course, not confess: “I use it as an expression of vanity,” or “I use it to express an urge to be like the world.”

No, most women will say: “I wear it to look nice” — or “to avoid offense.” They SAY it in words that sound harmless. But GOD KNOWS YOUR HEARTS better than you do — and HE knows that the heart of women, as well as men, is “Deceitful above all things, and desperately wicked.” And He asks: “Who can know it?” (Jer. 17:9.) Yes, the inner intents of the heart often deceive its owner. TO WHOM does this woman wish to “look nice”? — to GOD? NO, for to GOD she looks like a painted artificial PROSTITUTE! . . . .

There is so much more that could be said on this subject that I could go on and on and fill 100 pages!* But I think this is enough! Every woman who wants that deceitfulness and wickedness removed from her heart is going to remove that physical colored dirt from her face once and for all!

Those yielded to the CHRIST who paid such a PRICE for this very cleansing will need no more. Those not so yielded would not repent and let the precious blood of Christ cleanse them, and their faces, though I write ten thousand pages! God lays down the LAW. God tells us WHAT IS SIN, and He tells us that this vain use of facial makeup is SIN!

But God leaves it to YOU to decide whether to sin! And never forget the PENALTY for this sin is DEATH for eternity in a Lake of FIRE! It is truly, an AWFUL — a FRIGHTFUL FATE. YOU are WARNED! You are a free moral agent. That decision is now YOUR RESPONSIBILITY!

I never expected to hear that sentiment echoed in today’s “worldly discourse”:

Peterson: Why? Why do you make your lips red? Because they turn red during sexual arousal. That’s why. Why do you put rouge on your cheeks? Same reason. How about high heels? They’re there to exaggerate sexual attractiveness. That’s what high heels do. Now, I’m not saying people shouldn’t use sexual displays in the workplace, I’m not saying that. But I am saying that that is what they’re doing, and that IS what they’re doing.

Jordan Peterson: Yeah. I do think that.

(From Dispatches from the Culture Wars)

Okay, the “worldly discourse” replaces the fear of hell with the “don’t harass me at work” motivator, but it’s the same message. And I suppose that in the eyes of God as per the above exposition there is no difference between a whore and presenting oneself as a “sex object”.

Here’s a trip down memory lane. I once asked a fellow sister in “God’s church” to accompany me to a worldly wedding. She was godly, naturally, so didn’t wear makeup. Yet we knew everyone else, except for the men, would be wearing makeup there. I recall being conscious of how self-conscious my sister-in-Christ would be feeling at the occasion. We talked about it, of course.

But here’s the funny thing. I don’t ever recall her feeling conscious of being relieved that she did not look like a prostitute or me feeling that I was accompanied by a prostitute. To the extent that we felt different at all it was entirely to the extent that my companion was defying the standard custom.

That feeling should have taught us something: that God was a prick for thinking women wearing makeup today looked like prostitutes.

Here’s another example of a fallacious interpretation. It’s from that infamous interview of Jordan Peterson with Vice.

There is so much wrong with so much of this interview, and I’m only picking on this one tiny part. But here are a few difficulties: red is a popular lipstick color, but how does he explain these other colors, which can also be quite attractive? What about the implicit racism in that claim — it’s a white trait to have a greater contrast in color between the lip and the face? What about the men — why do we have a vulva-mimic between our nose and our chin?

Where is Peterson’s evidence? This is another example of the Desmond Morris effect: he simply asserts that his interpretation is the obvious one, therefore it must be true.

Allow me to offer a better, alternative explanation.

Women are not putting on make-up in order to invite random men to have sex with them — that’s the explanation of a sociopath, someone who can’t empathize with another human being. Women are putting on makeup in order to conform to culturally defined standards of attractiveness. Often this involves accentuating attributes associated with femininity — under the influence of estrogen, human bodies develop fuller lips, so additional color is used to exaggerate female features. They are simply announcing, “I am a woman, and I look good”.

That is not synonymous with announcing “I am a sex object.”

It’s about taking pride in one’s appearance, making an effort to conform with society’s expectations, and about identifying with a group. Peterson is doing exactly the same thing by refusing to wear makeup and having a conventionally male hairstyle — he’s taking a position on how men ought to look, and conforming to social pressures.

That’s only a portion, of course. The full article is Have you ever noticed how often the origin of breasts is explained as “for men”?

10 thoughts on “When Lipstick Is for Whores”