I have just been reminded (thank you David Fitzgerald) that Philip R. Davies also was one of the very few mainstream scholars to actually publish the view that the Jesus myth theory ought at least to be taken seriously. Davies himself did not subscribe to it but he did acknowledge its reasonableness.

See his article Did Jesus Exist? published on Bible and Interpretation in 2012. Some quotes (my bolding):

I … have often thought how a ‘minimalist’ approach might transfer to the New Testament, and in particular the ‘historical Jesus’, who keeps appearing to New Testament scholars in different guises.

So have I. I regret not ever having the opportunity to discuss the question with Philip Davies personally. In fact my own views on the question of Jesus’ historicity are grounded in the the “minimalist” approach that I first learned through In Search of Ancient Israel (see previous post).

I don’t think, however, that in another 20 years there will be a consensus that Jesus did not exist, or even possibly didn’t exist, but a recognition that his existence is not entirely certain would nudge Jesus scholarship towards academic respectability. In the first place, what does it mean to affirm that ‘Jesus existed’, anyway, when so many different Jesuses are displayed for us by the ancient sources and modern NT scholars? Logically, some of these Jesuses cannot have existed. So in asserting historicity, it is necessary to define which ones (rabbi, prophet, sage, shaman, revolutionary leader, etc.) are being affirmed—and thus which ones deemed unhistorical. In fact, as things stand, what is being affirmed as the Jesus of history is a cipher, not a rounded personality (the same is true of the King David of the Hebrew Bible, as a number of recent ‘biographies’ show).

Philip R. Davies has died. Philip Davies was a major influence on my own understanding of the origins and history of ancient Israel, including the origins and nature of the Hebrew Bible. I understand that his book, In Search of Ancient Israel, was groundbreaking in that it influenced the way many of his peers came to view the “primary history” found in the Old Testament books Genesis to 2 Kings. My understanding as an outside amateur is that he brought together various ideas that had received little attention prior to 1991 and challenged the assumptions and fallacious reasoning underpinning traditional scholarly ideas about what was labelled “biblical Israel”.

Many readers may already have seen my webpage that I began with several pages setting out the argument of his book, In Search of Ancient Israel.

I never finished those posts. When I came to write about his views on who wrote the biblical books and why, and how the details of the biblical myth arose, I found myself branching out into much wider reading, including more recent publications by Davies, discovering competing theses — and I am still engaged in those explorations. I have Philip Davies to thank for these discoveries and ongoing journey.

Davies was part of known to be part of a group of scholars known as (derogatively) “the minimalists”. Some referred to it as the Copenhagen School. Two of the other pillars of this group were Thomas L. Thompson and Niels Peter Lemche. I have posted about their works many times on this blog. Traditional scholars sometimes viewed their work as being cynically sceptical. I viewed it as sound, fundamental scholarship. Read, for example, the approach set out in The Bible — History or Story?  and Common Sense and Credulity. I copy the first of these here. See it onsite if it is too small to read below. 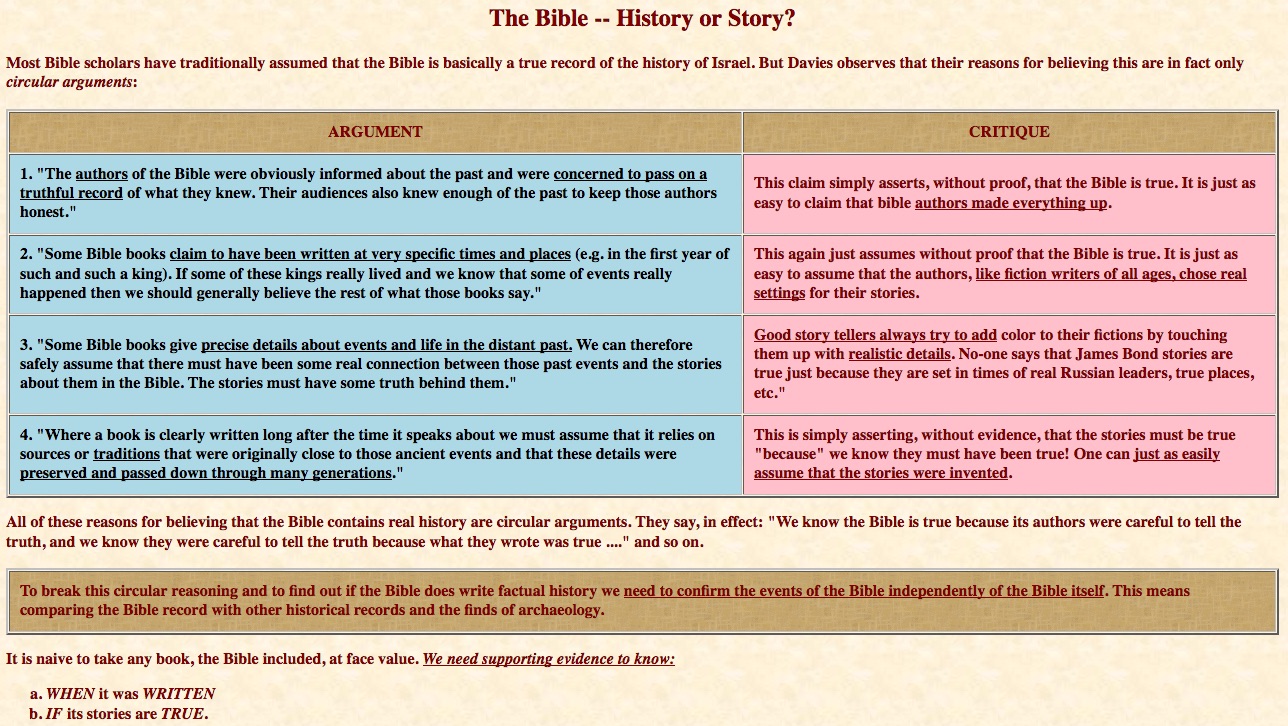 Some readers may recognize the argument there from many posts on Vridar. It expresses what I consider to be the fundamentals of sound historical inquiry and scholarly treatment of evidence. (The logic expressed applies equally to the approach to the New Testament books, I believe — but that is a step too far for many.)

Some books by Davies that I enjoyed reading, some of which I continue to use as regular references . . . .