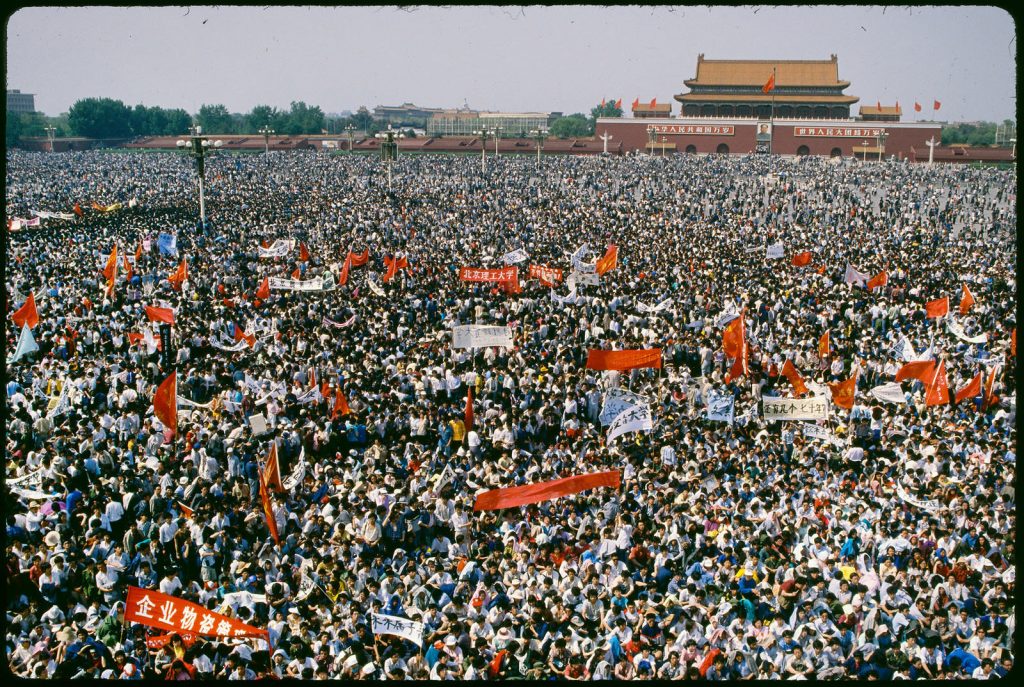 In 2005 I had the opportunity to visit Tiananmen Square. It was an eerie, haunting experience not simply because of knowing what had happened there 16 years before but because of the pressure to remain silent and forget.

From the night of June 3, 1989 until early morning, Chinese soldiers carried out a clearance operation on and near Beijing’s Tiananmen Square, a crackdown on what the Chinese Government wrote off as a “counter-revolutionary riot”.

Western media reported at the time that the death toll from the resulting massacre ranged from 100 to 3,000, but according to a secret UK diplomatic cable released last year, up to 10,000 protesters may have been killed. . . .

Over 1 million people were occupying Tiananmen Square in a show of solidarity by mid-May, but on June 2, China’s rulers made the order to send tanks and armed soldiers into the heart of Beijing.

Only a year earlier we had been treated to high-tech 3-D visuals of Tiananmen Square as a proud jewel of the Chinese exhibit at Brisbane’s World Entertainment Expo.

The event “never happened” according to Chinese government and educational institutions.

Born in 1990, Ming says he never even heard about the Tiananmen Square massacre until he was at university.

He happened to overhear his roommates talking about the so-called June Fourth Incident — a topic which is completely censored by Beijing and inaccessible for ordinary Chinese people.

It is not mentioned in Chinese state media, and it is not taught in schools. It is also a taboo topic even within some Chinese families, including Ming’s.

In 2005 soldiers stood guard at key points to enforce …. I’m not sure what. Presumably the curfew: no-one was allowed there after daylight hours. Possibly against large groups or persons they deemed suspicious from approaching. It remained a vast empty space broken in one direction by Chairman Mao’s mausoleum and queues of people slowly moving past his embalmed body. I felt very conspicuous stepping far away from that shrine to the vast empty expanse of the rest of the square that particular afternoon, with only a handful of others in the area, and with my movements being watched by the many young guards.

What agonized me was the failure of my Chinese hosts to indicate the slightest awareness of why I might have been interested in exploring further there at all after I had completed the obligatory look at Mao’s embalmed corpse. There was the usual talk of old history, of Mao, of the architectural features. . . . I finally burst it out, though nervously, softly: What did they think of what happened …. I don’t think I had the chance to finish my sentence. One girl butted in with a tense, anxious tone (or was that my imagination?) to tell me that yes, some bad people had been there at one time and how soon afterwards soldiers came to her family’s house (far away from Beijing) to ask about her. I think she had been a student at that time. I was told that her parents and neighbours assured the soldiers that she was a “good girl” and was not mixed up with any of those very bad hooligans causing some very bad trouble in Beijing. The soldiers, she told me proudly, went away smiling having been assured by parents and neighbours that she was, as they said, a “good girl”.

The reaction to my question left me in no doubt that I had seriously gaffed. It was not my place to raise such a question about such a “bad thing” that happened so long ago. Was I some sort of sympathizer with “bad people” for even thinking and wanting to ask about that horrible “forgotten” time?

That was the end of my visit to the vast and — except for the guards and the people immediately surrounding Mao’s mausoleum — practically empty Tiananmen Square.