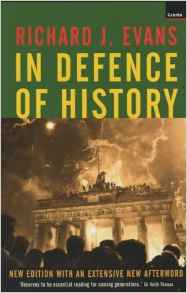 Hence our need to guard against the all-too-easy tendency to interpret the past through the way we perceive our own world today.

For the third contribution, the one of most significance for today, see the previous post.

I should add here that the study has moved on since the nineteenth century. The above and the previous post are nothing more than attempts to set out the record, according to one very prominent modern historian (Richard John Evans), of the pioneering contribution Ranke made for the study of history in modern times.

For the record I heard of E.H. Carr and cut my teeth on his book about the nature of history and historical facts well before I even heard of Ranke. I am very aware of the place of subjectivity and interpretation of data in historical research, and of the necessity for historians to create narratives from the raw materials they unearth in the archives. Unfortunately after some years of exchanges with various biblical scholars and engagement with some of their works I have concluded that too many biblical scholars who align themselves with postmodernist approaches to history have jumped into the field prematurely without a genuine knowledge of what has preceded them in the wider field of historical studies. Perhaps their understanding was limited by the way history was practised for too long within the antiquated and outdated theologically dominated classrooms.

2 thoughts on “Catchup — for you latecomers the history-basics lecture”