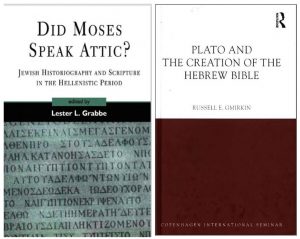 I have been posting insights from Russell Gmirkin’s Plato and the Creation of the Hebrew Bible (archived here) in which he argues that both many core and peripheral features of the text of the Hebrew Bible bear closer similarities to Classical Greek writings and practices than to what we find in ancient Mesopotamian and Levantine culture. Gmirkin’s hypothesis is that the authors of the biblical texts shared the wider intellectual ethos of the Hellenistic era with its interest in exploring ideal constitutional and legal systems. The Great Library at Alexandria, Egypt, was a repository of these ideas and resources that Judean scribes were known to access as freely as any other scholar of the day.

Another scholar who has argued for a Hellenistic provenance of the Biblical literature is Niels Peter Lemche, although his proposals have pointed Mesopotamia and Syria as possible centres where Judean scribes were exposed to Greek ideas and writings rather than Egypt. No doubt Judeans were exposed to Greek culture throughout the Middle East but Russell Gmirkin focuses on the Alexandrian library because we know that specific Greek texts (e.g. Plato’s Laws, Aristotle’s Politics) that contain some striking echoes in the Biblical literature were housed there and we further know that Judean scribes worked there.

In this post I thought it worthwhile addressing some of the context to Gmirkin’s book by reference to a chapter by Lemche from 2001, “How Does One Date an Expression of Mental History? The Old Testament and Hellenism” in Did Moses Speak Attic? Jewish Historiography and Scripture in the Hellenistic Period edited by Lester L. Grabbe, pp. 200-224.

Lemche begins by reminding readers of the traditional circularity of the way scholars have dated the texts:

I have set out in table format the fundamental circularity underlying the scholarly arguments for not only the dating but also for the historicity of the Biblical narratives as argued by P.R. Davies (1992) at vridar.info.

In those days, everybody knew and talked about the ‘hermeneutic circle’. It was generally accepted that the study of ancient Israel was from a logical point of view based on a circellus logicus vitiosum, a false logical circle, but nobody within biblical studies believed that it was possible to avoid this logical trap. (p. 200)

But there are ways to recognize general cultural matrices of certain texts. Intellectual topics come and go like fashions, to somewhat oversimplify the point. I was reminded of this point when recently listening again to the Foucault-Chomsky debate: scientific progress, they agreed, is not linear but lurches in fits and starts as new ideas arise and old problems that once preoccupied the community are simply forgotten.

Every period in the history of humankind will give birth to a number of questions— within philosophy, religion or simple politics—that are specifically related to this period, hot subjects for a while and then forgotten. (Lemche, 2001, p. 207)

Lemche illustrates with micro-references to the scholarly dialogues of recent generations: END_OF_DOCUMENT_TOKEN_TO_BE_REPLACED