We often hear it said that historians deal with probabilities, not certainties. Thus Bart Ehrman explains in his latest book:

Ehrman, Bart D. (2016-03-01). Jesus Before the Gospels: How the Earliest Christians Remembered, Changed, and Invented Their Stories of the Savior (p. 31). HarperCollins. Kindle Edition. [My bolded emphasis in all quotations.]

Interestingly Ehrman assumes as a certainty (not probability) that the gospel narratives were sourced from “memories” of Jesus (whether personally experienced or fabricated memories) and sidesteps an entire area of biblical scholarship that argues the evangelists themselves imaginatively created the narratives of Jesus inspired by analogous tales in the Jewish Scriptures and other writings. He also uses the language — e.g. “that were recorded by” — we associate with historical “reports” or “records” thus further entrenching his bias in the mind of the reader. But we’ll leave Ehrman’s own contradictions aside for now and focus on the more general principle.

Anyone who has read scholarly works relating to Christian origins is familiar with the language of probability, possibility, maybe, likelihood, etc. Too often, however, this same language magically transforms itself as the argument proceeds into certainty. As Jacob Neusner in Rabbinic Literature and the New Testament complained of “pseudocritical” scholarship, it is commonly characterized a number of faults including

the use of “presumably,” “must” or “may have been,” and “perhaps,” a few sentences later magically converted into “was” and “certainly.” (p. 88) 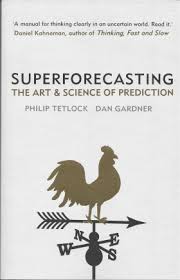 Let’s start with the reverse of history: forecasting the future. The past is past and gone but reverse our perspective for a moment and problems with vague and loose language become immediately obvious. The following cases are taken from Superforecasting: The Art and Science of Prediction by Philip E. Tetlock and Dan Gardner. In early 1951 the CIA published a National Intelligence Estimate warning that a Soviet Union attack on Yugoslavia “should be considered a serious possibility.” What does that phrase mean to you?

But a few days later, Kent was chatting with a senior State Department official who casually asked, “By the way, what did you people mean by the expression ‘serious possibility’? What kind of odds did you have in mind?” Kent said he was pessimistic. He felt the odds were about 65 to 35 in favor of an attack. The official was startled. He and his colleagues had taken “serious possibility” to mean much lower odds. Disturbed, Kent went back to his team. They had all agreed to use “serious possibility” in the NIE so Kent asked each person, in turn, what he thought it meant. One analyst said it meant odds of about 80 to 20, or four times more likely than not that there would be an invasion. Another thought it meant odds of 20 to 80— exactly the opposite. Other answers were scattered between those extremes.

When in 1961 President Kennedy sought to know the chance a small army of Cuban expatriates landing at the Bay of Pigs would have in toppling Fidel Castro his Chiefs of Staff concluded that the plan had a “fair chance” of success.

The man who wrote the words “fair chance” later said he had in mind odds of 3 to 1 against success. But Kennedy was never told precisely what “fair chance” meant and, not unreasonably, he took it to be a much more positive assessment.

Sherman Kent of the CIA’s Office of National Estimates sought a remedy by setting out more precise meanings: END_OF_DOCUMENT_TOKEN_TO_BE_REPLACED