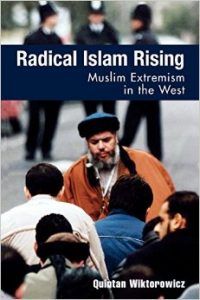 Why do people join religious cults and extremist groups? What turns some people into “mindless fanatics”?

In the previous post we were introduced to Quintan Wiktorowicz’s Radical Islam Rising: Muslim Extremism in the West (2005) that explores the reasons people in Britain joined the now banned extremist group, Al-Muhajiroun. As I read his work I was struck by the overlaps with the experiences of many who join religious cults, including my own experience with the Worldwide Church of God.

At the time of writing the above news came through of a swathe of terrorist attacks in Jakarta, Indonesia. Having visited Indonesia fairly regularly over the past seven years, including the city of Solo that is regularly associated with concentrations of jihadist extremists, I have no problem agreeing with those specialist commentators who point out that most Indonesians have no time for Islamist extremism and violence. (Keep in mind that though Indonesia contains the world’s largest Muslim population it is the world’s third largest democracy.) But that’s no defence against the tiny handful who are drawn to terrorist organisations. So why are a tiny few drawn to what most people deplore?

Here is the question Wiktorowicz asks:

So why participate in the [extremist] movement? On the surface, the choice seems irrational: the risks are high and the guarantee of spiritual salvation is intangible and nonverifiable (i.e., there is no way to know whether those who follow al-Muhajiroun’s interpretation and die actually make it to Paradise). And there are plenty of less risky alternatives that guarantee the same spiritual outcome. This includes a plethora of less risky Islamic fundamentalist groups that share many of al-Muhajiroun’s ideological precepts. Is participation in the movement, then, the choice of the irrational?

Wiktorowicz’s answers are covered in chapters under the headings of

Breaking those headings down a little . . . .

Of the few persons who take an interest in what most regard as “fanatical ideas” even fewer actually take the leap from intellectual agreement to jumping in knowing the sacrifice they are making and the world they are leaving behind. That final step is of particular interest but first things first. Why do a few of us become sincerely interested in the radical fringe ideas in the first place?

I won’t address all of those in this post. Let’s focus on some of the wedges that prise “cognitive openings” for now. END_OF_DOCUMENT_TOKEN_TO_BE_REPLACED