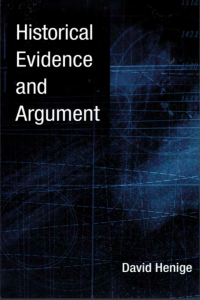 Marshall Sahlins and Gananath Obeyesekere draw upon the same body of evidence — the accounts of the various eyewitnesses among Cook’s crew that were published on their return to England. Sahlins concluded from these sources that Cook’s death was plainly result of the bad luck of the timing of Cook’s two landings on Hawaii ten days apart. The first occasion coincided with a ritual cycle that led the natives to believe Cook was the embodiment of their god Lono; the second time coincided with a phase that pointed to Cook being the embodiment of the warlike god, Ku, thus obligating the natives to kill him.

The evidence is plainly there in the eyewitness accounts, argues Sahlins. Obeyesekere, he says, is distorting the evidence. Obeyesekere accuses Sahlins of reading festivals and practices into the evidence that fails to mention them explicitly. I’m sure there are differences but on the surface it sounds as if Henige’s summary account could apply to the opposing interpretations of Paul’s letters:

Sahlins’ argument implies (I am relying upon Henige’s discussion here since I have not read Sahlins’ work myself) that the eyewitness accounts of Cook’s death are unproblematic and straightforward. Without Obeyesekere’s disagreement with Sahlins’ interpretation neutral readers would remain unaware that “the textual evidence” is far from unproblematical. As a result, Henige argues, readers are better informed by following the argument between the two than had they only known Sahlins’ work.

No doubt. It was by following the arguments between mythicists and mainstream scholars that I myself began to understand many of the assumptions and the actual evidence supporting traditional scholarship.

However, the main message that Henige wants readers to draw from the quotation above is that Sahlins is emphatically wrong to denounce the negative value of scepticism.

Sahlins could not be more wrong, if understandably miffed, in regarding the raising of doubt as a “negative” thing. It is its polar opposite—accepting as true statements based on little more than authority—that has had the most deleterious impact on the advancement of knowledge. (p. 33)

Henige illustrates the same division over the function of “too much doubting” among historians of ancient Mesopotamia. I had not been aware that a problem so prominent in New Testament historical studies had also made such significant inroads into other ancient historical studies.

But I move on to related problems covered by Henige.

When theories best fit the evidence

The premise of evidential sufficiency surfaces everywhere. In criticizing a review of a book on the dating of the crucifixion, Norman Walker chastised the reviewer: his “rejection” of a particular chronology “simply because this point cannot be ‘scientifically’ proved strikes one as high-handed, unhelpful, and unscientific[!].”

After all, he went on, “[t]he said chronology does indeed harmonise the Passion accounts in a wonderful manner, and until [the reviewer] or anyone else has a better one to displace it, must rightly hold the field. The onus lies on [the reviewer] or others to produce a satisfactory counter-hypothesis.

It is more important to build than to destroy.”22

How familiar that sounds to anyone who has read even a few New Testament reviews and arguments.

“Smith was disputing arguments that the date of I Dynasty of Egypt should actually be about 750 years rather than 955 years before XI Dynasty began. Smith argued that “the average for generations of kings over the whole period of I-VI Dynasty seems acceptable,” yet that number is still not known today. This sort of laisser-passer is most frequently awarded sources that contain unique information desirable for developing arguments. The Turin Canon’s data are irresistible starting points for modern chronological schemes, and they might well be generally correct. But there is no incontrovertible independent evidence that they are, nor any strong internal likelihood that such long durations would be calculated, remembered, and recorded—time and time again—in Old Kingdom Egypt.” (pp.35-36)

Another one that is so familiar in New Testament journals and monographs:

H.S. Smith had earlier argued that “. . . it is bad historical method to assume that a document of this type is radically inaccurate until there is strong external evidence to that effect.”

Alas, the context is a dispute among Egyptologists. I place the details in the adjacent box.

Hartmut Steggemann speaks with similar pre-emptive and proprietary confidence: “[t]his [i.e., his] theory fits the evidence best and should no longer be doubted.”

In discussing Josephus’ testimony about Masada, Cohen is less imperious, candidly writing that “[r]ather than simply admit ignorance, I offer the following conjectures.” Cohen then offers a scenario that, while more plausible than that of Josephus, is necessarily based on testimony in Josephus, and moreover is untestable, even though it does not conflict with the available archeological evidence.

Innumerable others have perforce taken a similar line.

Regarding England’s most famous—and most elusive—monarch, Snyder puts the issue squarely: “[there] is no contemporary proof for an historical Arthur, but neither is there proof of his fabrication, and it is fair to ask whether it is the job of an academic historian to build a negative case.”

. . . as if the more that historians believe something (or the more of them who do), the truer it is

These rationalizations—and the litany could easily be immensely longer—sound as if the more that historians believe something (or the more of them who do), the truer it is. Such sentiments betray a fundamental estrangement from honest doubt.

The answer to Snyder’s question

In relation to the historicity of King Arthur question above Snyder asked whether a historian should be building a negative case. Henige politely hides his jaw dropping and patiently responds:

To answer Snyder’s peculiar, but useful, question: it is very much the object of scholarship precisely to determine the likelihood that a notion is true by first testing to see whether it is false.27

Whether or not a theory “best” fits the evidence, vowing not to question it creates one of those self-fulfilling prophecies we all are warned about. The history of scholarship is littered with theories once thought to fit the evidence best, and sometimes actually did for a while, but were abandoned when new evidence, new techniques, and new angles of vision— including doubt—entered the picture.

27 In this case, for instance, there is a great deal more evidence (not “proof”) that the Arthur we know was created by several centuries of successive embellishment, culminating with Geoffrey of Monmouth’s farrago of specious history—culminating, but not ending, since Arthurian myth-making continues apace.

It would appear that David Henige would disagree with those New Testament scholars who demand that any argument that doubts Christianity began with a historical Jesus must offer a “more persuasive” scenario of origins before they can be taken seriously.

I will continue this in a future post. Henige continues his discussion of the scholarly belittling of scepticism with further specific references to biblical studies. He also asks what limits should be set on scepticism.