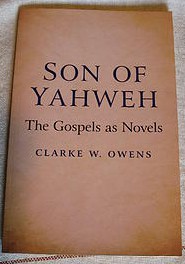 One of the most interesting and informative books I have read about the gospels is one that is probably (and most unfortunately) not widely known among biblical scholars, at least not yet. It is a study of the gospels from the perspective of literary criticism. Clarke W. Owens shows us the way literary criticism works and the insights it gives us into the nature of texts and to a certain extent the original intentions of their authors.

Several posts on Owens’ book appear in the Vridar archive.

We can catch up with more of Clarke Owens now on his website Clarke W. Owens and Blog.

I need to update my Who’s Who table. I omitted to include Clarke Owens in the agnostic side of things since it appears he actually has the very same or similar view as I do with respect to the historical Jesus. The question is hardly relevant given that the only Jesus that matters for Christianity is the Christ of faith; historical questions meanwhile should operate quite independently of any à priori assumptions about his identity and role.