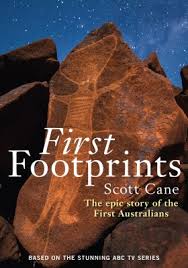 18,000 to 15,000 years ago retreating glaciers ushered in a “wholly new” (Holocene) era of a warmer and wetter world. Sea levels rose.

The ocean rose for 13,000 years. It was a flood of incremental magnitude and great variability but, in the longer scheme of things, the seas rose at an average rate of 1 centimetre every year. It was a relentless flood equating to over half a metre in a lifetime, with a lateral consequence of many kilometres over flat coastal plains across each generation. (p. 195, my bolding throughout)

But the rise was not at a constant steady pace. Some periods its rise was imperceptible. Other time it was “disconcertingly fast”:

At times, great swathes of the coast disappeared in front of people’s eyes. (p. 193)

Spasmodic periods of rapid rise alternating with very gradual rises continued until the seas reached their present levels around 1500 years ago.

On the Nullarbor Plain, at times of rapid rise, the sea moved inland at the rate of up to a metre a week. A person might see the sea move inland by 2 to 3 kilometres in his/her lifetime.

Territories were lost, subsistence regimes altered, spiritual locations and religious pathways drowned at sea. Across the northern coasts of Australia rapid sea level rise may have consumed up to 5 kilometres of land in a year. (pp. 200-1)

Now we come to the Flood Myths:

Rising sea levels were a global phenomenon of such proportion and human impact that they appear to have been captured in cultural memory: there are over 500 myths about great floods across the planet. The biblical flood may be one of them, the Australian narratives may be others. These narratives are of particular note as they invariably account for sea level rise in the context of the land that existed before it — they are myths of palaeo-environmental context, less about the formation of the sea as it is seen and might be understood in the present and more about the coast as it changed through antiquity. Together they form a remarkable body of religious lore that must be at least 6,500, if not 10,000, years old. These narratives are thus among the oldest known parables in the world. (p. 201)

As would be expected, the Australian myths of such floods are associated with the flattest country.

“The Gulf of Carpentaria was formed when a raft was dragged across the land and created a channel that filled with sea water.”

“Elcho Island, off the coast of Arnhem Land, was severed from the mainland when a stick was pushed into the ground and the sea rushed in.”

“Joseph Bonaparte Gulf was flooded when endless rains came and the sea rose, threatening to extinguish fire then maintained by mythological beings.”

“The Bassian Plain was drowned after children found a sacred object. The land gave way, the seas moved in and many people died.”

“Port Phillip Bay is described in mythology as a flat, fertile plain, inundated when a large storm blew up and the sea flooded in.”

“Backstairs Passage, between Fleurieu Peninsula and Kangaroo Island, was formed when an ancient mythical being ordered the waters to rise and drown his fleeing wives.”

“Stories of a great flood account for Spencer Gulf in South Australia, and a great fire swept across the ancient coastal plains of the Swan River and cracked the earth, letting the sea flood in and separating Rottnest Island from the mainland.”

“All desert Tjukurrpa [Dreaming] on the Nullarbor Plain relate to the emergence of the sea. The myth of the Wati Kutjara ends abruptly where the Two Men went into the water, via a soak at the Head of the Bight. They are immortalised as two pillars out to sea.”

“In another story, fire is almost extinguished by the rising sea — in an analogous manner to the account from the Joseph Bonaparte Gulf — while the aunty of those who saved it sat cross-legged on the plains pushing up a barrier in an attempt to stop the sea rising any further.”

“In another story, large numbers of mythological birds, embodying the People of the Sun and the Shadow, crossed the desert to build a rampart of spears.”

I don’t believe the story of the flood in the Bible is derived from such ancient myths. Noah’s flood is a very late story drawing on other literature (Babylonian and possibly Greek, too) for theological and cultural identity purposes. One curious side-note here: the Bible associates the cause of the Flood with violence across the earth; the archaeological evidence (rock art) depicts the first wars in the wake of the advancing waters robbing them of traditional land-space.