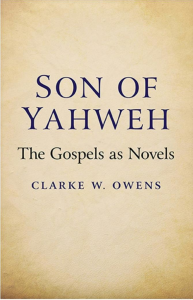 As a follow up to my last post I am sharing here another valuable snippet I read in Clarke Owens’ Son of Yahweh: The Gospels as Novels.

Owens’ first chapter, “Literary Criticism and the Historical Jesus”, is brilliant and deserves to be read and addressed by everyone who has an interest in how scholars work on the “quest” for the historical Jesus. My reasons for that evaluation:

And for those rabid anti-mythicists who assume that anyone who questions the historicity of Jesus is a raving lunatic with a hostile vendetta against God and Christianity, well, they’ll be disappointed to learn that Clarke Owens writes with sensitivity towards those whose cherished beliefs are challenged in his book.

‘Quest’ is an interesting word

As Owens point out,

to go on a quest for something means that we seek it; we hope to find it; it is our most cherished goal, like the quest for the Holy Grail.

A quest is an entirely different kind of undertaking from

one in which we seek to ascertain whether or not materials exist which would support a finding that Jesus had an historical existence . . .

That is, a quest assumes that there is an historical Jesus to be found, and the reason for this is, ultimately, theological belief. A truly historical inquiry would, on the other hand,

require that we first examine the materials before we determine the nature of the quest [i.e. whether the materials indicate there is an historical Jesus or some other Jesus or agent to be sought]

Purpose of the Quest is to advance the credibility of theology

Prominent HJ scholar John P. Meier himself said so. In his chapter 7 of volume one of A Marginal Jew, “Why Bother? The Relevance of the Quest for the Historical Jesus”, Meier answered this question this way:

[T]he proper object of Christian faith is not and cannot be an idea or scholarly reconstruction, however reliable. . . .

What, then — as the objectors — is the usefulness of the historical Jesus to people of faith? My reply is: none, if one is asking solely about the direct object of Christian faith. . . . Yet I maintain that the quest for the historical Jesus can be very useful if one is asking about faith seeking understanding, i.e. theology, in a contemporary context. . . . [O]nce a culture becomes permeated with a historical-critical approach, as has Western culture from the Enlightenment onward, theology can operate in and speak to that culture with credibility only if it absorbs into its methodology a historical approach. . . .

Indeed, the usefulness of the historical Jesus to theology is that he ultimately eludes all our neat theological programs; he brings all of them into question by refusing to fit into the boxes we create for him. Paradoxically, although the quest for the historical Jesus is often linked in the popular secular mind with “relevance,” his importance lies precisely in his strange, off-putting, embarrassing contours, equally offensive to right and left wings. . . .

Properly understood, the historical Jesus[‘s . . .] refusal to be held fast by any given school of thought is what drives theologians onward into new paths; hence the historical Jesus remains a constant stimulus to theological renewal. For this reason alone, the Jesus of history is worth the pains of the pursuit . . . . (pp. 198-200, my bolding in all quotes; I have quoted Meier more extensively than has Owens in Son of Yahweh)

No doubt many of us who have read scholarly works on the historical Jesus will concur with Owens further comment:

As it turns out, the confession of theological purpose occurs in more than one work to be discussed in this book [Son of Yahweh], and is a more or less conscious apology offered usually deep into the text. Where it is not openly confessed, it appears as a sudden, inexplicable inconsistency in the logic of one’s method.

The Pope also said so. To quote a passage from Owens:

For centuries, Christian intellectuals have been trying to come to terms with, and to appropriate for their own purposes, post-Enlightenment methods of “historical criticism.” The idea has always been to contain the threat that rose to prominence in the Age of Reason to religious hegemony over ideas. Thus, “historical criticism” to these intellectuals is a branch of theology tactically aimed at containing flight from the church based on a weakening of belief in Christian miracles and orthodoxy. It is not really a historical method, because history, as treated in this method, is checked by the primacy of doctrine. As Edgar Krentz has written,

“History is studied to remove it in favor of nonhistorical truth. . . . Theology must either justify the use of historical criticism and define its nature or be willing to reformulate the Christian faith in terms of a positivist truth that historicism alone will validate.”

According to Krentz, historical criticism became generally accepted over time, and was made a duty for Christian intellectuals by a papal encyclical in 1943. . . .

That 1943 papal encyclical was Divino Afflante Spiritu, and appears in three of our posts on Thomas Brodie’s Beyond the Quest.

Who is this Krentz Owens is citing? The work by Edgar Krentz is The Historical Critical Method. The editor’s foreword (by Gene M. Tucker) explains what it is about:

Its purpose is to examine in general the foundations of what has come to be called the historical-critical investigation of the Bible. It traces the rise of this approach, examines its aims, methods, and presuppositions, and considers the implications of such work for theology.

So now you may think your suspicions that this was so are finally confirmed. Such confessions do explain why “the quest for the historical Jesus” has been mostly confined to theologians and is not found in the curricula of classical or ancient history studies. Of course the theologians will boast of their agnostics and atheists (the Ehrmans and Goulders) to supposedly “disprove” this assertion but will only be miring themselves deeper into fallacy and irrelevance (to all but the faithful) when they do so.

7 thoughts on “The Historical Jesus Quest Is Theology in Disguise”