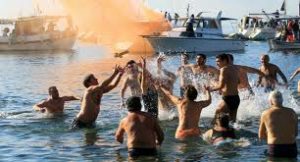 This post follows on from the previous one outlining Couchoud’s thoughts on Gospel origins. It starts with highlights from what he believes (generally following Harnack) Marcion‘s Gospel contained; looks at the next Gospel written apparently by Basilides; then at the way our canonical Gospel of Mark took shape and why, followed by the Gospels of Matthew, John and Luke.

The Gospel of Marcion

It was placed with the letters of Paul and a commentary, the Antithesis, as a replacement for the Jewish scriptures.

There is nothing of a connected narrative in it. (p. 139)

It was composed of some sixty anecdotes, or pericopes, detached fragments without any connection between them. (p. 139)

Jesus was not born but descended from heaven and the gospel begins: END_OF_DOCUMENT_TOKEN_TO_BE_REPLACED

As to why a gospel was written about a “mythical” Jesus, here is a take by Paul Louis Couchoud from the 1920s and published in English in 1939 as The Creation of Christ. (For other thoughts on this theme see discussion comments here.)

To make sense of this one must understand that Couchoud dates the letters of Clement of Rome and Ignatius to around 150 c.e. One recalls here the more recent ideas about the Ignatian letters by Roger Parvus. This leaves us with the common observation that “the half century from 70 to 120 is the most obscure period in the history of Christianity” (p. 110).

Couchoud argues that before that gap there was Paul, Jerusalem apostles and prophets. They all lay claim to visions of Christ. The Book of Revelation (dated prior to 70 and the fall of Jerusalem) is the outcome of a prophetic vision of one who is starkly opposed to Paul’s theology and visions. “Paul alone understood that the Son thus revealed was a crucified God.” (p. 132)

Couchoud relies heavily on Harnack’s interpretation of Marcion, an interpretation that has more recently met a trenchant challenge with Sebastian Moll’s The Arch-Heretic Marcion (2010). Moll says Harnack was anachronistically trying to make Marcion too much like an ideal Protestant reformer. But in this post I will let Couchoud have his say from his perspective in the early twentieth century.

Whereas many (including myself) have attempted to argue that the gospel narrative was an indirect response to the crisis of the first Jewish war that witnessed the destruction of the Temple in 70 ce, Couchoud places more emphasis on the events of the second Jewish war — the Bar Kochba rebellion (Bar Kochba being hailed as a Jewish Christ and being responsible for persecutions of Christians) and its suppression by Hadrian who erected a pagan temple on the site of the old in the early and mid 130s.

So of what had Christianity consisted up to this time? Couchoud considers how the Christian scene looked to Marcion: END_OF_DOCUMENT_TOKEN_TO_BE_REPLACED