Theologians draw out spiritual lessons from the tale of God sending his Son in the flesh, performing miracles and teaching truths incomprehensible to most, and then dying and returning once again to heaven so he can be with many more followers here and now who do understand and appreciate his fleshly advent. The same theologians even explain history in terms of this theological drama. Followers of Jesus were so shocked by the unexpected demise of their hero on the cross that they feverishly set about fabricating this spiritually meaningful tale to compensate for their disillusionment by restoring among themselves a new faith and hope for a future life.

The possibility that that spiritually meaningful story might have been the original source of the tale of the historical advent of Jesus seems not to occur to them. (No, I am not saying the story was fabricated overnight ex nihilo. All stories and genres have their antecedents, and such antecedents to the Gospel story and genre are a lot more in evidence in the record than we are conditioned to quickly acknowledge.)

But let’s do a little comparative religious study to see if another ancient cult can shed any light on the question of Jesus’ historicity.

The apparent historical coming of Dionysus to Greece, and the beginning of his cult there, was celebrated every year with a procession re-enacting his coming at a festival in his honour. The Greek playwright Euripides produced what became one of the most well-known plays in the ancient world, the Bacchae, which dramatized the events of this supposedly historical coming of the god.

I quote from John Taylor, Classics and the Bible, an outline of this “historical” play:

Dionysus has come to Thebes [the Greek city] disguised as a priest of his own cult. He brings a new form of worship from the east, but his origins lie in Thebes. He is a son of Zeus and the Theban princess Semele, though his divinity has been denied even by her sister Agave, mother of the young king Pentheus. He has made the young women of Thebes mad and sent them to celebrate his ecstatic rites on Mount Cithaeron. Cadmus, the aged and abdicated founding king [of Thebes], father of Agave and Semele, accepts the new religion, as does the seer Teiresias. But Pentheus is violently hostile: he has the disguised Dionysus imprisoned, though the miracle-working god shows this to be futile. Pentheus falls gradually under the power of his captive, who induces him to dress as a woman and spy on the mountain revellers. They detect and in deluded frenzy dismember him. Agave in triumph bears his head to Thebes believing that her prey is a lion. A recognition scene reveals the terrifying truth. (pp. 61-62)

John Taylor discusses a number of remarkable similarities between scenes in this play and those we find throughout the Gospel of John (in particular the trial of Jesus before Pilate) and others in Acts, such as the conversion and imprisonment of Paul.

There are other ways in which the Bacchae may be seen as a prefiguring of the later Gospel narratives, too. Dionysus often speaks in brief moralizing phrases with double meanings; he is a polarizing figure who divides not only characters within the play but also audiences and students of the play ever since; appeals are made that one can still believe in the god while at the same time being rational enough to reject some of the mythical miraculous tales told about him; and the character and narrative are drenched in ambiguities and ironies.

But Taylor informs us that behind all this, scholars have widely accepted a certain core historicity behind the tale of the arrival of the Dionysian cult to Greece as found in this drama, and that in retrospect it is possible to see that the historical character of the original tale was from the beginning integral to the myth — and its mythical meaning — itself.

[M]any scholars continued to assume a basic historicity in the story of his arrival from abroad. But the ambiguity in the myth (describing the native of Thebes who is also a newcomer from the east) symbolises what is surely his real nature, as a construct of the Greek imagination: a symbol of disruptive difference, and a radical reconciler of opposites. The epiphanic aspect of Dionysus, stressed in particular by W. F. Otto, is now seen as central to understanding his myth and cult. The account of his arrival in one city in the heroic past  encapsulates his character, because it describes also the impact of ‘the god who comes’ on the individual heart and mind. (p. 67, my emphasis, and with link to Otto’s book — see chapter 5 here)

John Taylor follows by observing a similar meaning in the “history” of Christ:

Historians of Greek religion here use (whether knowingly or not), the language of existentialist theology, according to which the true significance of the story of the Christ who came at one point in history, and promised to come again, is that he comes now to those who hear his message. The language of encounter is Pauline, but in other respects this existentialist perspective has its roots in the fourth gospel. (pp. 67-8) 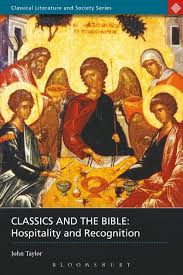 9 thoughts on “The mythical meaning of gods (Dionysus, Jesus) being given historical settings”