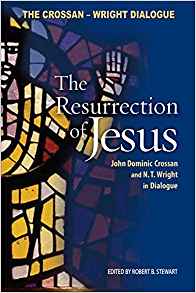 But N. T. Wright is “a leading New Testament scholar” whose work is certainly discussed with all seriousness by other scholars as diverse as (“liberal”) John Dominic Crossan and (“independent”) Maurice Casey.

Another curiouser rationale for this sort of scholarship was posted recently in a scholar’s blog castigating mythicists for failing to accept the collective judgments of the scholarly experts in their interpretations of “facts”, in the process comparing them with creationists who fail to accept the facts put forward by evolutionary scientists. The entire post was a bizarre muddle of conceptual confusions that is surely meant to sound reasonable only to those who need some background noise while they lull themselves to sleep. To try to follow each point of argument in concrete detail, referring to specific examples of each point made — in other words, to try to follow the reality of what is being said, not just let the grand conceptual generalizations bedazzle and muddle the thinking — gives one a headache from trying to connect sentence and phrases that have no logical connection at all.

I might do a detailed response to it some day. Just to give one example, though a key one: “facts” that are studied and that verify evolution are seemingly compared with “facts” that are studied by Historical Jesus scholars. What this misleadingly glosses over, however, is (1) that the HJ scholar has no comparable “facts” about Jesus, but only interpretations based on criteria; and (2) the HJ scholars have never seriously addressed the question of the historicity of Jesus, but always assumed it. (This poster of this blog article knows this from my earlier detailed demonstration of this from the writings of the likes of E. P. Sanders.) What the HJ scholars seek to discover is the kind of person Jesus was, not whether he existed or not.

This of course is totally unlike anything done by scientists in relation to evolution. They study facts that do support the theory of evolution that has been addressed head on and demonstrated.

So one can find many books and articles listing the standard questions of creationists and the standard responses of the evolutionists. It is all black and white and any lay person can understand the basic logic and the clear hard facts presented. No-one will be convinced against their will, but everyone with average intelligence can understand and accept the clear reasoning and facts of the evolutionists. This, of course, is something the HJ scholar cannot do in relation to mythicists because mythicists, at least the ones that interest me, are engaging with the source material and drawing on the studies of the scholars, finding their arguments to be logically invalid (circular, non-sequiturs, false-dilemmas), and proposing models that avoid these logical inconsistencies and make more rational sense of the evidence (as opposed to so-called “facts”).

But all this has been said a hundred times. When I get the energy I hope to finish off my posts on Spong’s arguments for the scriptural (as opposed to literal historical) bases for the events of Jesus Christ’s life and death. And I’ll be wondering all the while why he singles out just two details to have a historical background while none of the other details does. No, not really, it is very obvious why this seemingly arbitrary distinction must be made.