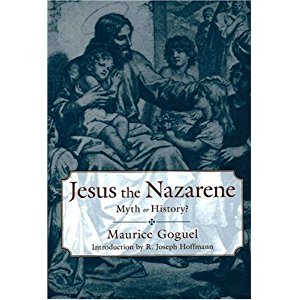 I discuss here Goguel’s critique of the Christ Myth as seen through the eyes of two biblical scholars, mainly R. Joseph Hoffmann, and very briefly Christopher Price. I conclude with my own understanding of the reason (bias) underlying Hoffmann’s perspective of Goguel in his anti-mythicist arguments, and an alternative perspective from Earl Doherty.

Hoffmann compares this book by Goguel with the one discussed in the preceding post by Case:

Whatever its argumentative shortcomings, this section of Goguel’s work [attempting to show that the theology in Paul’s letters and in the apocalypses presupposes the gospel tradition] is especially important in setting out the assumptions and terms of the debate between the myth theorists and defenders of historicity. Goguel is by far superior to other defenders* of historicity because he is willing to acknowledge the serious aporiai of locating fugitive biographical details in a swirl of theological and mythological embellishment. He does not deny, for example, the missionary purpose of the gospel writers. He does not suggest that the reporting of “objective” fact (“natural supernaturalism”) is a part of any evangelist’s agenda. . . . (p. 32-3)