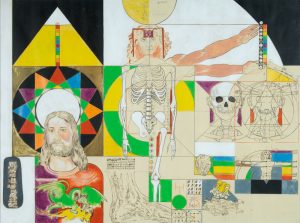 But it’s not that Earl advocates lunacy in a manner devoid of learning. He advocates a position that is well argued based on the evidence and even shows substantial knowledge of Greek. But it cannot be true, you say. Why not? Because it simply can’t be and we shouldn’t listen to what can’t be true. No. Not so quick.

[From Crosstalk message 5438 by Professor of Religious Studies, Stevan Davies of Misericordia University, author of Jesus the Healer and The Gospel of Thomas Annotated and Explained (see homepage) ]

It is easy to come across strong, even hostile, responses to some of Earl Doherty’s arguments for Jesus mythicism, though it seems few have actually read them. One of Doherty’s arguments in particular that has met with considerable scorn is his claim that the NT phrase translated “according to the flesh” does not necessarily mean that Jesus was thought have lived a human life on earth.

I add nothing new in this post, or nothing particularly new. This post is only intended to provide another platform for an opportunity to some facts about Doherty’s arguments to be made known. As I have discussed elsewhere, there are some areas where I find myself at odds with Doherty, and my views on the origins of Christianity are always tentative. But that does not prevent me from acknowledging that Doherty often has much stronger arguments than some of his critics (who often have not even read him) would have others believe.

The passage most often cited in connection with Jesus being “according to the flesh” is Romans 1:1-4

Paul, a bondservant of Jesus Christ, called to be an apostle, separated to the gospel of God which He promised before through His prophets in the Holy Scriptures, concerning His Son Jesus Christ our Lord, who was [made]* of the seed of David according to the flesh (kata sarka), and declared to be the Son of God with power according to the Spirit (kata pneuma) of holiness, by the resurrection from the dead.

In several NT epistles we find “flesh” having a mystical meaning, as noted in the post previous to this one. It does not follow, of course, that it therefore has a mystical meaning here, but the variety of connotations of this word does give us reason to be cautious before quickly jumping to conclusions about what the word “must” mean.

I can only cite what others have said about the translation of “kata sarka” and Doherty’s interpretation of it, in particular. So, given Professor Stevan Davies’ observation of Doherty’s knowledge of Greek (quoted above), I read Dr Richard Carrier‘s discussion of this with some degree of confidence:

The actual phrase used, kata sarka, is indeed odd if it is supposed to emphasize an earthly sojourn. The preposition kata with the accusative literally means “down” or “down to” and often implies motion, usually over or through its object, which would literally read “down through flesh” or “down to flesh” or even “towards flesh.” But outside the context of motion, it frequently means “at” or “in the region of,” and this is how Doherty reads it. It can also mean “in accordance with” in reference to fitness or conformity, and in this sense kata sarka can mean “by flesh,” “for flesh,” “concerning flesh,” “in conformity with flesh,” and the like, meanings that don’t relate to the location or origin of the flesh. Presumably this is what biblical translators have in mind with “according to the flesh,” but I find it hard to understand what Paul would have meant to emphasize with this, other than what Doherty already has in mind. For example, the word kata can also have a comparative meaning, “corresponding with, after the fashion of,” in other words “like flesh.” And it has other meanings not relevant here. But the most common, relevant meanings of kata with the accusative do at least fit Doherty’s theory that Jesus descended to and took on “the likeness of flesh” (Romans 8:3), in which case kata sarka would mean “in the realm of flesh.” Nevertheless, though kata sarka does not entail that Jesus walked the earth, it is still compatible with such an idea. But many other strange details noted by Doherty are used to argue otherwise, and I think he makes a good case for his reading, based on far more than this. (Did Jesus Exist?)

As Carier goes on to detail, this inherent motion in kata often becomes figurative, and this is one of the senses in which I interpret it, applying both to human and divine situations: “in conformity with,” “like / after the fashion of” flesh, “in accordance with / in relation to” flesh, with “flesh” sometimes entailing the idea of sphere or location, namely the fleshly realm of corruptibility below the moon. . . . As stated, Carrier notes that kata can mean “at” or “in the region of,” and the latter meaning is also to be found in classical Greek (see Liddell and Scott). (p. 731, Jesus: Neither God Nor Man)

He also cites C.E.B. Cranfield [International Critical Commentary: Romans, p.60] as allowing the possibility that kata means “in the sphere of”, “although he prefers to read kata sarka as encompassing the idea of ‘ongoing nature,’ something broader than simply the idea of ‘in the life span.’ Cranfield thus inadvertently points to an idea which is non-historical, fitting the timeless realm of myth.” (p.722)

I have not discussed the other portion of Romans 1:1-4 here, the part about Jesus being made of the seed of David. That is another discussion again. But there are a few points worth noting in brief:

0 thoughts on ““According to the flesh” — Doherty’s mythicist argument”