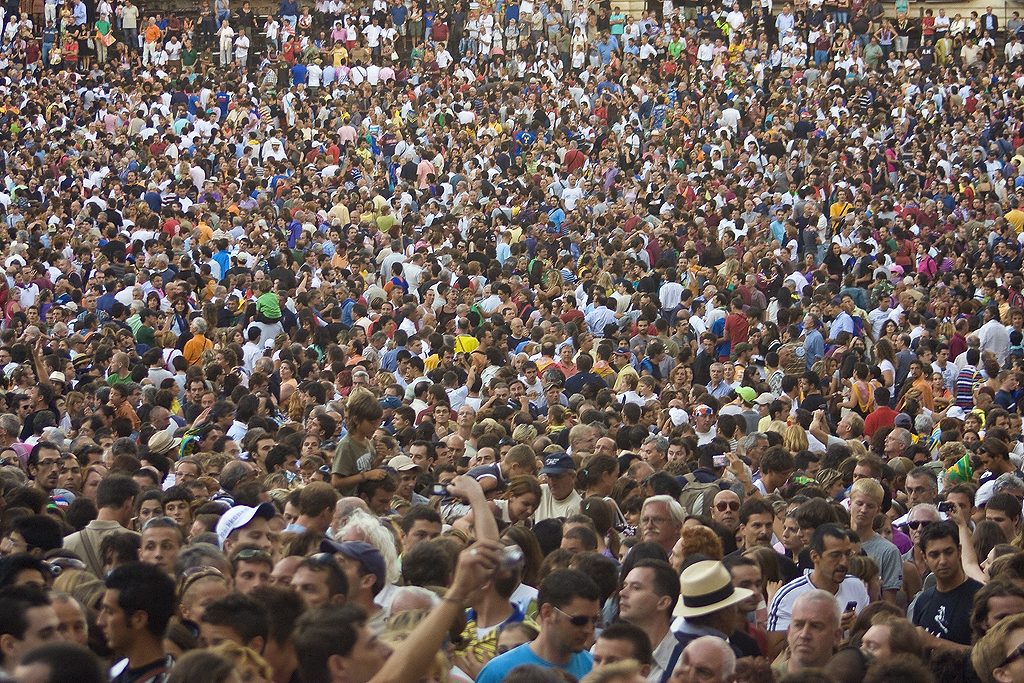 I love the ease with which Mark can get a crowd together any time he likes, and dismiss them just as easily whenever he needs them out of the way. And most amazingly of all, he can even have a crowd of thousands organize themselves methodically and efficiently into groups of 100s and 50s. Event organizers today would surely be more impressed with that miracle than merely leaving 12 basket loads of food scraps to clean up after the event.

First of all, John the Baptist has to prepare the way of the whole nation, so the whole nation conveniently comes out to him. Being in the wilderness was no problem. It was just like in the days of Noah when all the animals came to the ark.

And there went out unto him all the land of Judaea, and they of Jerusalem. (Mark 1:5)

When it came time for the story of the paralytic being let down through the roof (Mark 2:1-12), he needed a device to get him up on to the roof in the first place, and the crowd blocking the doorway did the trick. But once healed, Jesus tells him to take his bed with him and skip off back home. Suddenly we have a clear passage way at the door and off he goes. The rumour of just another healing miracle about to take place seemed to have the effect of instilling one giant collective yawn among the mob and off they went muttering how they had seen it all before.

And the crowds came just from the right places, too, on cue, to re-enact the Exodus scene. The king and his court plot to kill him, he escapes with a vast mixed multitude, towards the sea. Instead of bringing down great curses, however, he had won fame far and wide for removing plagues. Thousands were suddenly free to take time off work and  leave their homes and travel vast distances to join the event at this right time. And then he ascended a mountain with just a few close associates, all in perfect emulation of of the ancient Mosaic event.

6And the Pharisees went forth, and straightway took counsel with the Herodians against him, how they might destroy him. 7But Jesus withdrew himself with his disciples to the sea: and a great multitude from Galilee followed him, and from Judaea, 8And from Jerusalem, and from Idumaea, and from beyond Jordan; and they about Tyre and Sidon, a great multitude, when they had heard what great things he did, came unto him.

9And he spake to his disciples, that a small ship should wait on him because of the multitude, lest they should throng him. 10For he had healed many; insomuch that they pressed upon him for to touch him, as many as had plagues. 11And unclean spirits, when they saw him, fell down before him, and cried, saying, Thou art the Son of God. 12And he straitly charged them that they should not make him known.

13And he goeth up into a mountain, and calleth unto him whom he would: and they came unto him. 14And he ordained twelve, that they should be with him, and that he might send them forth to preach (Mark 3)

There was also that need crowd of just the right size to fill a house and no more. Jesus had come down with his twelve disciples, entered a house, and in came the multitude to sit around him. There was no room for anyone else to get in, so his family had to stand outside asking for him (Mark 3:19-35). The coincidence of the symbolism was just perfect. Mark, obviously an eyewitness who was standing just inside the doorway, could see that his family were on the outside and Jesus was able to address those on the inside as his brethren, his mothers and true family.

Also amazing was Jesus’ power to be able to get away at will from a crowd that had assembled just to see him. A deaf and dumb man asked Jesus in the midst of a crowd to heal him, so Jesus simply took him aside away from the crowd, and the crowd magically just stood there without any natural curiosity as to where he was off to or interest in seeing another miracle and let him get away. Then the man came rushing back to them — had he and Jesus hidden behind a tree to perform the miracle? — to show them he had been cured. Mark 7:32-36:

32And they bring unto him one that was deaf, and had an impediment in his speech; and they beseech him to put his hand upon him. 33And he took him aside from the multitude, and put his fingers into his ears, and he spit, and touched his tongue; 34And looking up to heaven, he sighed, and saith unto him, Ephphatha, that is, Be opened. 35And straightway his ears were opened, and the string of his tongue was loosed, and he spake plain. 36And he charged them that they should tell no man: but the more he charged them, so much the more a great deal they published it;

Crowds were much more cooperative in those days.

So cooperative, indeed, that when they were needed to welcome Jesus into Jerusalem as the coming Messiah and King, they all assembled at the main road and gateway and cheered him on in (Mark 11:8-10):

And when they were needed to ensure Jesus had a bit more time to preach a few more things to be recorded in the gospel, and to get away with disturbing the peace in the Temple, the crowd was there to keep him safe (Mark 11:18):

18And the scribes and chief priests heard it, and sought how they might destroy him: for they feared him, because all the people was astonished at his doctrine.

What is most amazing here is the remarkably perspicacious insights of this mob. They could tell immediately that Jesus was acting out something quite meaningful here, and definitely not just throwing a tantrum because he had been cheated by a money-changer (Seeley, Jesus Temple Act, CBQ, ’93, Vol. 55, p.263).

They were also needed to give him time to give us all the Last Supper, too. So they were there when needed once again (Mark 14:1-2):

1After two days was the feast of the passover, and of unleavened bread: and the chief priests and the scribes sought how they might take him by craft, and put him to death. 2But they said, Not on the feast day, lest there be an uproar of the people.

But when they were needed to have him crucified, then they could all cooperatively (for the sake of humanity’s salvation) switch from adulation and insight into a lynch mob at the behest of a few priests.

11But the chief priests moved the people, that he should rather release Barabbas unto them. 12And Pilate answered and said again unto them, What will ye then that I shall do unto him whom ye call the King of the Jews? 13And they cried out again, Crucify him. 14Then Pilate said unto them, Why, what evil hath he done? And they cried out the more exceedingly, Crucify him. 15And so Pilate, willing to content the people, released Barabbas unto them, and delivered Jesus, when he had scourged him, to be crucified. (Mark 15)

David Seeley comments on this:

the unexplained ease with which the crowds are turned against Jesus makes one suspect that to a large extent they are simply a literary device, functioning as protectors or as betrayers as narrative need dictates. (D. Seeley ‘Jesus’ Temple Act’ CBQ 55 1993 pp. 263-83)

And their literary function extends as far back as chapter 1. As a deus ex machina they even get more use than God and demons.