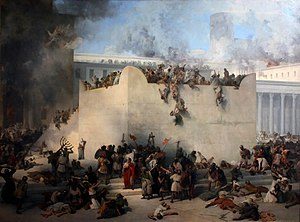 The argument that 1 Thess. 2:13-16 is an interpolation generally includes the claim that the passage refers to the destruction of Jerusalem in 70 c.e. — some years after Paul’s time. The last line of this section is

Eddy and Boyd, in The Jesus Legend, attempt to argue for the genuineness of the passage by denying this would have originally referred to the destruction of Jerusalem:

E&B appeal to Romans chapters 1 and 9 (and again to a passage in 2 Thessalonians, a letter that is also strongly argued as being a forgery) to suggest that the wrath of God might simply mean that He has abandoned them to ungodly behaviour and delusion.

But if the passage does refer to a specific event, they claim that it could refer to the expulsion of the Jews under Claudius in 49 c.e.

So E&B fail to argue a case themselves. They merely point to a couple of contradictory views and in effect say,

Take your pick. Pick any weakly supported solution we can think of so long as it denies the passage is a post-Pauline interpolation. And oh, by the way, we are not going to even repeat for you the arguments of those who insist it refers to the destruction of Jerusalem. Why bother if we can think up anything that says the passage is genuine? We don’t want to confuse you with the details.

One wonders if E&B have any idea (or if they even want to know) what it means. If the reader doesn’t like one explanation, then give them a choice so they can take one they are comfortable with. They outline no real argument for or against either conclusion. This is hardly making a “case for the historical reliability” of Jesus or the purity (no interpolations) of our Pauline letters.

They also assert that the phrase “at last” or “to the uttermost” literally means “to (or until) the end”, and one can think of this meaning paralleling Jesus’ prophecy of future judgment at the end of the age. That is, E&B inform readers that the passage may simply mean that God’s judgment is on the Jews until the coming of Christ.

What Eddy and Boyd don’t tell their readers

On comparing with the more hopeful thought in Romans

One of the scholars E&B cited (Simpson) to support their statement the linguistic arguments for an interpolation are supposedly very weak disagrees with some of E&B’s claims.

In response to the argument (E&B’s #1) that the Thessalonians passage is comparable to Romans 9, and thus consistent with Paul’s thought, Simpson writes:

Simpson avoids the interpolation explanation by thinking the difference is evidence that Paul changed his approach to the Jews over time and changing circumstances:

Romans 10:21 – 11:10 is preceded and followed by material (10:1; 11:11-32) which shows that Paul did not want Gentile Christians to retain their anti-Judaism unmodified and that he had come to a very different view of the fate of non-Christian Jews. (p.61)

In the previous post we saw how E&B and others could “explain” the un-Pauline style by thinking Paul chose to write in an out-of-character manner. Now we see the argument about content suggesting that Paul changed his views about the final fate of Jews over time. Sounds like the target moves at will whenever one needs to establish the God-breathed inspiration of every word in the Bible. I suppose this approach is one way to “convincingly argue” that the passage really was written by Paul!

E&B’s assertion that the passage means that God’s wrath is only to last until the end of the age is at least as old as J. Munck’s 1967 “attempt to paraphrase the expression to mean ‘until the last events at the end of the world,’ i.e., the conversion of Israel, thus harmonizing the passage with Romans 11:25f, is untenable.” (Pearson 1971) Birger A. Pearson discusses the variant translation possibilities and concludes:

The passage excludes categorically any possibility for the Jews except the naked wrath of God. (p.82)

Pearson discusses the (at least) 35 year old argument recycled by E&B that the passage refers to the expulsion of the Jews from Rome. The key to interpreting the passage, he writes, is the verb “has come” (“the wrath has come upon them”). εφθασεν is an aorist tense (completed and/or past action). Pearson also discusses other arguments for genuineness of the passage that take this aorist verb to mean a “prophetic past” (Paul is predicting the destruction of the temple) or to mean that God’s judgment is on schedule with one more step.

All of these suggestions fail to do justice to the text as it stands. The aorist εφθασεν must be taken as referring to an event that is now past, and the phrase εις τελος [finally, completely, utterly] underscores the finality of the”wrath” that has occurred. It need only be inquired further what event in the first century was of such magnitude as to lend itself to such apocalyptic theologizing. The interpretation suggested by Baur and others is still valid: 1 Thessalonians 2:16c refers to the destruction of Jerusalem in 70 A.D. (Pearson, pp. 82-83)

Pearson finds relevance in the well-documented fact that Jewish tradition in New Testament times blamed the earlier destruction of Jerusalem (587 bce) on the killing of the prophets. He sees the early Christian literature picking up this Jewish meme and linking the death of Jesus to the theme of the murder of the prophets. This led to the associating of the destruction of Jerusalem in 70 ce as being occasioned by the death of Jesus:

There is ample evidence that Christians post-70 interpret the destruction of Jerusalem as a punishment inflicted by God upon the Jews for killing the Christ. Indeed, certain of the rabbis connected the destruction of the nation and the temple with the theme of the persecution of the prophets by the fathers. (p.84)

This is strong evidence, in my view, that the passage in 1 Thessalonians that speaks of a finality of punishment having come upon the Jews because of their murder of Christ, is a part of the mosaic of late first century and second century thought.

Jeffrey S. Lamp (2003) discusses the meaning of this passage by comparing its other occurrence in The Testament of Levi 6

But the Lord’s wrath as come upon them finally (Testament of Levi 6, Lamp’s translation)

Here the parallel passage refers to the massacre of the inhabitants of Shechem (Genesis 34). (E&B later quote Lamp for support in another argument about this passage, but I will save that discussion for a later post.)

and on the possibility that εις τελος means “until the end”,

So when E&B assert

they are once again keeping their lay readers ignorant of the real arguments that are conducted among their academic peers. The argument that the passage refers to the destruction of Jerusalem is not an assumption, and there are several very good reasons to think that it does indeed refer to this event:

E&B would seem to have their readers think that their clichéd assertions have never been debated, or at least that no-one has been able to seriously challenge them. E&B have simply opted to ignore the contrary evidence and the debates that are conducted by their peers — even by some who also see the passage as genuinely by Paul. They have done nothing more than equip their readers with ignorance of the real arguments they claim to refute. They have given them tired and superficial dogma. Not enlightenment.

But E&B are not alone in their failure to educate their public, or in their entrenching the public in dogmatic ignorance of the facts. Other academics who have recommended their book to lay audiences are just as culpable.

Next posts will discuss E&B’s “refutations” of the argument that the passage is anti-semitic; that it is inconsistent with the positive outlook for the Jews in Romans 11; and then finally another argument or two that E&B ignore altogether.