Yawn!  What a crock!  But it’s Christmas season and it’s good for the media and good for the tourism industry.

A professional archaeologist, no less, is quoted in the media, on the eve of Christmas, declaring the discovery of a house in the very hometown of Jesus. Wow. No-one quite says it, but it could even be the same house he grew up in, or maybe where his best friend lived and where he had sleepovers.

(I like finding ‘7’ things to support a bible case — adds a nice ring of numerological authenticity.)

So who is Yardenna Alexandre, the archaeologist quoted in the media, and what is the role of the Israel Antiquities Authority (IAA) also cited as an authority in this news byte? I am not an expert to know, but I am a global citizen with access to the internet and here are some interesting finds (they took only minutes of googling to locate) that put this sensationalized news in an all too predictable context.

From Wikipedia on Mary’s Well:

Excavations by Yardenna Alexandre and Butrus Hanna of the Israel Antiquities Authority in 1997-98 – sponsored by the Nazareth Municipality and the Government Tourist Corporation – . . . .

So Nazareth Tourism sponsorship makes an appearance when one searches for Yardenna and the IAA . . . . ??

Then there is this piece on an Israel Ministry of Foreign Affairs website [it is the seventh listed link about the Jesus-era house discovery on this page above] that has a number of interesting oddities in it, but one in particular stands out. It’s final paragraph reads:

The “Association Mary of Nazareth” intends on conserving and presenting the remains of the newly discovered house inside the building planned for the “International Marian Center of Nazareth”.

What are the Association Mary of Nazareth and International Marian Center of Nazareth? Should we think that names like those represent neutral innocent bystanders in all of this? 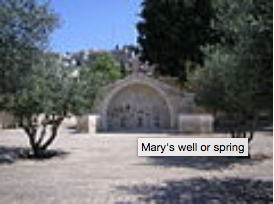 When I mentioned the above google-finds to a group on the Freethought and Rationalism Discussion Board (FRDB) another (“yalla”) responded with more tidbits:

That is the report linked by Orlando in post #66 where the same archaeologist, Yardenna Alexandre, conected to this current house discovery, announced the discovery of, possibly, the same wine jars with which JC performed his miracle at Cana. Or something like that.

“Alexander has been digging in modern Cana since 1999.

The current find came in a last-ditch “salvage dig” before a house is built on the site. A Christian Arab family financed part of the excavation, in accordance with Israeli law, before construction can begin.

Alexander believes that with more substantial investment, the site could became a major tourist attraction and pilgrimage destination.

“We’re really working very hard to save some of this site because what we do have here is a village of Jesus,” she said. “And it was here that he carried out the first miracle.”

Meanwhile I learned that another name that seems to be frequently associated with Yardenna in the media, Dr Stephen Pfann, also has some interesting associations. I replied to the above with:

Thanks for this. Associated with Yardena Alexandre are several online articles is Dr Stephen Pfann of the University of the Holy Land (the name tells you its ideological bent), and he/it appears to be also associated with the Nazareth Village Project too http://www.uhl.ac/NazarethVillage/nazareth.html

Jeezus-Kabeezus! Who would ever have thought that economic and religious interests could be behind a misleading supposed “scientific” report in the mainstream media!?

For more information on Nazareth I recommend Rene Salm’s webpage, www.nazarethmyth.info. His page contains a link to the official IAA report on this particular archaeological find and its contents are a long ways away from the sort of hype Yadenna is quoted as having fed the media on the eve of Christmas. His book is well worth a read, too. I’ve reviewed a “scholarly” review of it here. 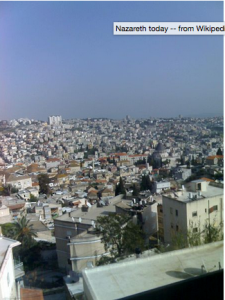