Richard Carrier has posted his response to David Litwa’s chapter that professes to be addressing the Christ Myth theory:

I also posted on the same chapter by Litwa:

Carrier’s post comes with a much more lively and colourful style than mine.

Not all early Christian gospels made it into our Bibles. One non-canonical second century gospel is known as the Infancy Gospel of Thomas [IGT] and it presents a terrifying image of Jesus as a boy.

The child Jesus strikes another boy dead for merely bumping into him by accident.

IV. 1 After that again he went through the village, and a child ran and dashed against his shoulder. And Jesus was provoked and said unto him: Thou shalt not finish thy course (lit. go all thy way). And immediately he fell down and died. But certain when they saw what was done said: Whence was this young child born, for that every word of his is an accomplished work? And the parents of him that was dead came unto Joseph, and blamed him, saying: Thou that hast such a child canst not dwell with us in the village: or do thou teach him to bless and not to curse: for he slayeth our children.

V. 1 And Joseph called the young child apart and admonished him, saying: Wherefore doest thou such things, that these suffer and hate us and persecute us? But Jesus said: I know that these thy words are not thine: nevertheless for thy sake I will hold my peace: but they shall bear their punishment. And straightway they that accused him were smitten with blindness. 2 And they that saw it were sore afraid and perplexed, and said concerning him that every word which he spake whether it were good or bad, was a deed, and became a marvel.

When a teacher punishes Jesus for insolence he strikes him dead, too. Another time Jesus is playing idly on the sabbath with pools of water (we was making clay sparrows) and when an older child attempted to stop him Jesus caused him immediately to wither away like a desiccated stick. Not that he was all bad. When Jesus is blamed for pushing a child to his death from a roof Jesus resurrects the boy in order to have him testify to his innocence: readers swinging in the mood of the gospel are left to assume he was then dropped back down dead.

But if the storyteller(s) of IGT wanted to illustrate Jesus’ divine identity, why would they portray him as a (sometimes) arbitrary, mischievous problem child? This would seem to be a “very naive or crude” and “unsophisticated” way to portray Jesus’ divinity, in the words of Larry Hurtado.

Or in the words of John Meier

The portrait of this sinister superboy belongs more in a horror movie than a gospel.

That we find the IGT’s portrayal of Jesus so shocking serves as a warning to how far removed we are from understanding the world that gave us the stories of Jesus — indeed, that gave us the very concept of the Biblical God.

M. David Litwa researches several specific ways in which early Christians depicted Jesus as a Mediterranean god in Iesus Deus. He devotes one chapter to the IGT.

But this Jesus did do some good for others, too. (Isn’t that the way of the evil personas in horror movies?)

XIII. 1 Now his father was a carpenter and made at that time ploughs and yokes. And there was required of him a bed by a certain rich man, that he should make it for him. And whereas one beam, that which is called the shifting one was too short and Joseph knew not what to do, the young child Jesus said to his father Joseph: Lay down the two pieces of wood and make them even at the end next unto thee (MSS. at the middle part). And Joseph did as the young child said unto him. And Jesus stood at the other end and took hold upon the shorter beam and stretched it and made it equal with the other. And his father Joseph saw it and marvelled: and he embraced the young child and kissed him, saying: Happy am I for that God hath given me this young child.

Yet the horror movie image is still with us, is it not?

The ferocity and ambiguity of Jesus’ character are not compensated by his acts of benevolence. One must face head-on the disturbing character of Jesus in this gospel. Attempts to tame the wild child remain unsatisfying.

M. David Litwa compares like with like. How are other child divinities depicted at this time? How is it that anyone — apart from a horror movie script writer — imagine a god to be so malevolent? Why would anyone compose a story of Jesus like this?  END_OF_DOCUMENT_TOKEN_TO_BE_REPLACED

It seems that a growing number of scholars (thinking in particular here of Larry Hurtado, Richard Bauckham and others who approvingly cite them on this question, and now even Bart Ehrman) have in recent years been taking up the argument that the followers of Jesus took up the view that Jesus was exalted to a very high divine status almost from the moment he was believed to have stepped out of his tomb.

Why is this happening? One would think that the gradual evolutionary view that Jesus’ exaltation to the godhead would accord more with a “plausible historicity”. We are regularly reminded how Jews abhorred the notion of a human being considered divine (though with many qualifications given the Second Temple evidence for persons like Moses being thought of as divine by at least some Jewish authors) and that it must have been with the increase in numbers of gentiles joining the church that the notion of a divine human was conceived and grew.  END_OF_DOCUMENT_TOKEN_TO_BE_REPLACED 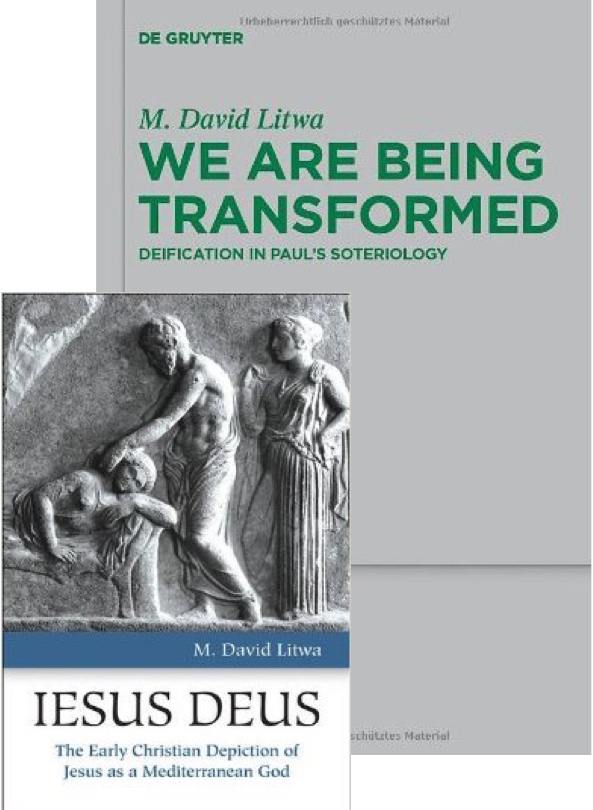 It was the burden of chapter 3 to show that deification (so defined) was not an idea foreign to the Judaism of Paul’s time. The Greek Bible already recognizes immortality as constitutive of deity (Gen 3:20; Ps 81 [82] :6), and calls Israelite kings “God” (Ps 44[45]:7) and “son of God” (Ps 2:7) as vice-regents of God. At the center of Jewish thought, there was thus always an analogy between theomorphic human beings and an anthropomorphic deity (Gen 1:26; Ezek 1:26-28). In Paul, this analogy was centered on Christ, the divine Messiah and image of God (2 Cor 4:4) to whom believers assimilate to regain their theomorphic status. Nevertheless their “theomorphicity” went far beyond what was imagined for original humanity. It involved sharing in Christ’s divine immortality ׳ and universal rule. These are the qualities, I argued, which constitute the divine identity of Christ. END_OF_DOCUMENT_TOKEN_TO_BE_REPLACED