How is one meant to respond to the words of a secular historian who says it would be “foolish and arrogant” to claim that his approach is “inherently superior” to one used by a Christian apologist? How is it possible for a secular rationalist to engage with a faith-grounded apologist as if both perspectives should be evaluated on an equal footing? Does the virtue of “mutual tolerance” require persons with opposing intellectual agendas to somehow find a way to exchange views constructively and productively? Does the pointlessness of “preaching to the converted” mean one’s efforts to exchange ideas among others with a similar philosophical outlook is also pointless?

Imagine the impact if more and more nonreligious, secular-minded historians were to become NT scholars. But if such a hypothetical collection of scholars were to make its impact felt, there must be mutual tolerance and the avoidance of . . . preaching to the converted. It would be foolish and arrogant to claim that one approach is inherently superior to opposing ones. . . . (p. 32)

How can a nonreligious, secular-minded historian possibly not claim his or her approach is inherently superior to an opposing one that “proves” the bodily resurrection of Jesus?

How can a leopard change its spots? How can the Christian apologists ever agree that their methods and faith-assumptions are not superior to those of the secular-minded nonreligious rationalist? What would be the point of being a secular-rationalist if one did not believe that such an outlook was indeed superior to the methods that are justified by faith? 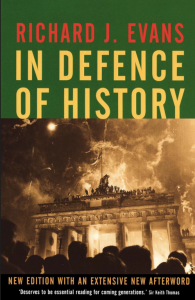 Crossley confuses particular historical methods and approaches with the philosophical underpinnings most of them have in common: a belief that testable knowledge is more reliably accumulated through secular-rational methods rather than through enquiry guided by and seeking to serve the agenda of religious faith:

Richard Evans has pointed out that the history of history is littered with examples of different hegemonic claims by a given historical theory or practice wanting to dominate the world of historical study but usually ending up as legitimate subspecialities.

Richard Evans was not addressing faith-histories versus secular histories. He was referring to the various approaches within secular history: postmodernists, psychohistorians, Marxists, feminists, social historians. Crossley has badly misunderstood and misapplied Evans’ point. (See Kindle version of Evans’ In Defence of History, locations 2744 and 3688)

It is not a question of one new method claiming hegemony only to be sidelined to a subspeciality. The real issue is well expressed by Niels Peter Lemche: END_OF_DOCUMENT_TOKEN_TO_BE_REPLACED

The traditional use of the Bible

The central point of the previous post was that the Bible came to be viewed as having a singular message that buttressed a comprehensive an entire world view. That is, one’s larger view of the world was believed to rest on biblical authority.

Nineham gives “an example of how such a feeling arose”:

If the Bible spoke of angels, and these were interpreted in what then seemed the only way possible, as a group of hypostases, or entities, then it could easily seem as if the existence of the chain itself was a part of the biblical revelation, or at any rate an indisputable deduction from it. (p. 62)

The challenges of the natural sciences

As we all know, Copernicus and Galileo were the first to challenge seriously the Biblical view of the place of earth amidst the heavens. In the nineteenth century geology and evolutionary biology struck blows at the Bible’s creation narrative. The church’s reactions we also know well:

[I]t is instructive to notice the extent to which, both in the sixteenth and nineteenth centuries, the immediate and passionate reaction of the Church was to try to defend the statements of the Bible in every sphere. (p. 63)

John Keble of the nineteenth century has left a useful trivia quote:

When God made the stones he made the fossils in them. (Presumably in order to test the faith of nineteenth century scientists!)

But the Bishop Wilberforces and Philip Henry Grosses could not win. It became increasingly clear, however slowly in some quarters, that flat denial of what the natural sciences had to come to understand was not going to prevail.

The early chapters of Genesis were at stake. The Bible was supposed to be authored by God and incapable of untruths.

There are many useful and interesting insights into the way the Bible has come to be (mis)used by scholars and laity alike in Dennis Nineham’s The Use and Abuse of the Bible (1976).

One cameo that attracted my attention (over half way through the book) was what Nineham had to say about the New Testament evidence for Christian origins. Being consistent with his opening arguments Nineham acknowledges that we know nothing of the “history” behind the mythical narrative of the “Christ event” in the Gospels. All we know “historically” is that, whatever the historical or biographical reality of Jesus was, it must have been remarkable enough to spawn new communities imbued with a whole new sense of the divine.

The bottom line of the argument is this:

One might think that the hypothesis is thus declared true because faith in God and the Bible permits no other hypothesis. (Nineham writes as a Christian and makes clear that his belief in God is bound up in his belief in “the Christ event”.) That’s not how Nineham explains it, however.

Non-Christian scholars of earliest Christianity today sometimes echo a mundane (cynical?) version of this argument: There can be no better explanation for the origins of Christianity than a failed life of yet another common healer/exorcist, preacher of platitudes and false prophet. (This latter explanation probably requires a greater miracle to make it work than the Christian explanation.)

True, Nineham does make passing mention of “extremists” who have proposed alternative hypotheses, but he dismisses these as quickly as he mentions them because the conventional wisdom does not accept their views. Ironically, in the first chapter of his book, “Cultural Change and Cultural Relativism”, he explains clearly why unconventional hypotheses, in particular those that affect the way we view the Bible, have such a hard time being taken seriously.

Before addressing the details of Nineham’s argument relating to Christian origins I’ll highlight some of his main insights into the ways the Bible has come to be misread and misused, and why, up to his own day.

Traditional use of the Bible

We know the Bible has for centuries been regarded as a sacred book, invested with infallible authority, wrapped in a mysterious quality and virtual sanctity. Its formal title accordingly Holy Bible.

What does this mean, exactly? These are the particular beliefs that have long accompanied readers of the Bible since late antiquity: END_OF_DOCUMENT_TOKEN_TO_BE_REPLACED