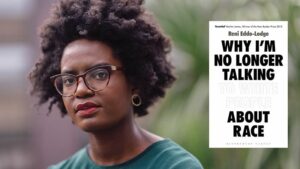 Serendipity in a local bookstore led me to read a new book on a subject I have been slow to understand for much of my life. I grew up with parents who deplored racism (they said so themselves) yet at the same time explained to me that the removal of aboriginal children from their families and placing them in missionary institutions was for their own good. At school we learned that the White Australia Policy at the time was not racist but was introduced to protect the wages and living standards of Australians.

We know our histories have been bloodied with racism for centuries yet we seem so easily to think that our generation today is not widely racist. I wonder if some slave owners would have said they, too, were not at all racist because they believed they treated their slaves well.

Today, racists are easy enough to spot among fringe extremists. They advertise their hatred. Yet so often I have heard minorities speak of problems they face with racism in our society and fellow whites reply indignantly that there is very little racism. How there can be such opposing perceptions is something that has intrigued me and obliged me to dig deeper over the years into what, exactly, racism is.

Enter Why I’m No Longer Talking to White People about Race by Reni Eddo-Lodge. Reni writes from the heart of both her own experiences and background history she has read to understand what has brought us to today. I found many old thoughts and experiences of my own expressed in novel ways that set me on spirals of rethinking so much of what I have so long taken for granted.

The Preface alone pulls the reader up with a start (at least it did for this reader):

On 22 February 2014, I published a post on my blog. I titled it ‘Why I’m No Longer Talking to White People about Race’. It read:

This emotional disconnect is the conclusion of living a life oblivious to the fact that their skin colour is the norm and all others deviate from it. . . .  I just can’t engage with the bewilderment and the defensiveness as they try to grapple with the fact that not everyone experiences the world in the way that they do. They’ve never had to
think about what it means, in power terms, to be white, so any time they’re vaguely reminded of this fact, they interpret it as an affront. Their eyes glaze over in boredom or widen in indignation. Their mouths start twitching as they get defensive. Their throats open up as they try to interrupt, itching to talk over you but not really listen, because they need to let you know that you’ve got it wrong.

. . . . Even if they can hear you, they’re not really listening. It’s like something happens to the words as they leave our mouths and reach their ears. The words hit a barrier of denial and they don’t get any further.

. . . . Watching The Color of Fear [a 1994 documentary about race] by Lee Mun Wah, I saw people of colour break down in tears as they struggled to convince a defiant white man that his words were enforcing and perpetuating a white racist standard on them. All the while he stared obliviously, completely confused by this pain, at best trivialising it, at worst ridiculing it.

. . . . So I can’t talk to white people about race any more because of the consequent denials, awkward cartwheels and mental acrobatics that they display when this is brought to their attention. Who really wants to be alerted to a structural system that benefits them at the expense of others?

I can no longer have this conversation, because we’re often coming at it from completely different places. I can’t have a conversation with them about the details of a problem if they don’t even recognise that the problem exists. Worse still is the white person who might be willing to entertain the possibility of said racism, but who thinks we enter this conversation as equals. We don’t.

Amid every conversation about Nice White People feeling silenced by conversations about race, there is a sort of ironic and glaring lack of understanding or empathy for those of us who have been visibly marked out as different for our entire lives, and live the consequences. It’s truly a lifetime of self-censorship that people of colour have to live. . . . .

So I’m no longer talking to white people about race. . . . Their intent is often not to listen or learn, but to exert their power, to prove me wrong, to emotionally drain me, and to rebalance the status quo. I’m not talking to white people about race unless I absolutely have to. If there’s something like a media or conference appearance that means that someone might hear what I’m saying and feel less alone, then I’ll participate. But I’m no longer dealing with people who don’t want to hear it, wish to ridicule it and, frankly, don’t deserve it.

After I pressed publish, the blog post took on a life of its own. Years later, I still meet new people, in different countries and different situations, who tell me that they’ve read it. In 2014, as the post was being linked to all over the Internet, I braced myself for the usual slew of racist comments. But the response was markedly different, so much so that it surprised me.

There was a clear racial split in how the post was received. I got lots of messages from black and brown people. There were many ‘thank you’s and lots of ‘you’ve articulated my experience’. There were reports of tears, and a little bit of debate about how to approach the problem, with education being rated highly as a solution to bridge the communication gap. Reading these messages was a relief. I knew how difficult it was to put that feeling of frustration into words, so when people got in contact and thanked me for explaining something they’d always struggled to, I was glad that it had served them. I knew that if I was feeling less alone, then they were feeling less alone too.

What I wasn’t expecting was an outpouring of emotion from white people who felt that by deciding to stop talking to white people about race, I was taking something away from the world, and that this was an absolute tragedy. ‘Heartbreaking’ seemed to be the word that best described this sentiment.

Another commenter pleaded: ‘Don’t stop talking to white people, your voice is clear and important, and there are ways of getting through.’ Another one, this time from a black commenter, read: ‘It would be such a painstaking task to persuade people, but we should not stop.’ And a final, definitive comment read simply: ‘Please don’t give up on white people.’

Although these responses were sympathetic, they were evidence of the same communication gap I’d written about in the blog post. There seemed to be a misunderstanding of who this piece of writing was for. It was never written with the intention of prompting guilt in white people, or to provoke any kind of epiphany. I didn’t know at the time that I had inadvertently written a break-up letter to whiteness. And I didn’t expect white readers to do the Internet equivalent of standing outside my bedroom window with a boom box and a bunch of flowers, confessing their flaws and mistakes, begging me not to leave. This all seemed strange and slightly uncomfortable to me. Because, in writing that blog post, all I had felt I was saying was that I had had enough. It wasn’t a cry for help, or a grovelling plea for white people’s understanding and compassion. It wasn’t an invitation for white people to indulge in selfflagellation. I stopped talking to white people about race because I don’t think giving up is a sign of weakness. Sometimes it’s about selfpreservation.

And so the book with the same blog post title was written and since then, Reni ironically explains, she has been talking non-stop with white people about race! (But you saw that coming.)

I will post little snippets from it from time to time here, snippets that struck me as important and worth sharing. In one early chapter Reni outlines history of the slave trade in Britain and of racist conflicts up to the present day. The detail that was new to me and that I can’t get out of my head. Remember how we(?) learned at school that William Wilberforce led an abolitionist movement that culminated in 1833 with the end the slave trade in the British empire? The coda we did not learn:

The public pressure of the campaign was successful, and an Act of Parliament declared slavery abolished in the British Empire in 1833. But the recipients of the compensation for the dissolution of a significant money-making industry were not those who had been enslaved. Instead it was the 46,000 British slave-owning citizens who received cheques for their financial losses. [source: https://www.bbc.co.uk/iplayer/episodes/b063db18/britains-forgotten-slave-owners]

That’s a discordant note on which to finish a campaign for human justice.