Continuing in this post with my outline of Celine-Marie Pascale’s article The Weaponization of Language. This post addresses her section on a favourite topic of mine, one that I’ve posted many times about, Propaganda. I’ve fleshed out some of Pascale’s points by going back to her citations and quoting directly from them. (Other links point to the online articles themselves where available.)

Propaganda might be most commonly associated with the effort of governments to manipulate information and sentiments to gain public support for specific agendas (Messeryly, 2015). In the United States, the term propaganda has been used to characterize the kinds of interventions advanced by the Soviet Union. When the same critical lens is turned toward modern liberal political democracies, propaganda is often referred to as manufacturing consent (Ellul, 1973; Herman and Chomsky, 2002). In the United States it has been used to intensify capitalist impulses. Sigmund Freud’s nephew, Edward Bernays, developed propaganda (which he referred to as public relations) as a means to compel people to buy products they did not need. Propaganda’s sole task is to shape desires and dispositions. Through propaganda Bernays also pushed back on all forms of regulation and in the US made free-market capitalism synonymous with democracy. Bernays’ propaganda machine was so effective that it inspired Joseph Goebbels, the Reich Minister of Propaganda in Nazi Germany (Curtis, 2002).

Do click on and view that Curtis, 2002 link at the end of the above paragraph if you haven’t already seen it. It is a BBC documentary by Adam Curtis, 58 minutes long, and part 1 of a series of 4 that survey the way government and business have used the theories of Sigmund Freud to control the masses in an age of “democracy”. I’ve covered aspects of what he addresses in other posts here, in particular the influence of Freud’s nephew, Edward Bernays. Bernays, we learn from a close family member in the doco, despised the masses, thought of them as “fools”. No wonder, when it shows how he became extremely wealthy by showing governments and businesses how to manipulate them.

But back to our Pascale article and to begin with the more obvious:

Some tools frequently used by propaganda are

We have come to expect the abundance of “slogans, images, and catchphrases” at election time.

With consistent exposure over time, propaganda becomes a language that thinks for you (Klemperer, 2013).

I looked up the Klemperer reference. Here are a few extracts from Victor Klemperer’s The Language of the Third Reich: 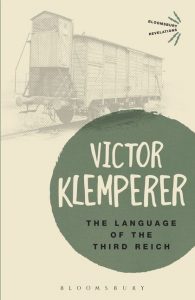 The Most Powerful Hiterian Propaganda Tool

What was the most powerful Hitlerian propaganda tool? Was it the individual speeches of hitler and Goebbels, their pronouncements on this or that theme, their rabble-rousing against the Jews, against Bolshevism?

Certainly not, because a lot of this was not even understood by the masses, or it bored them in its endless repetitions. On many occasions in public houses, while I was still allowed to enter a public house without wearing a star, and later on many occasions in the factory during air raid protection duty – when the Aryans had their own room and the Jews theirs, and the radio was located in the Aryan room (along with the heating and the food) – on many occasions I heard the cards being slapped down noisily on the table, and loud discussions about the rationing of meat and tobacco and about the cinema, whilst the Führer or one of his henchmen was carrying on interminably. And the next day the papers claimed that the entire population had been hanging on their every word.

No, the most powerful influence was exerted neither by individual speeches nor by articles or flyers, posters or flags; it was not achieved by things which one had to absorb by conscious thought or conscious emotions.

Instead Nazism permeated the flesh and blood of the people through single words, idioms and sentence structures which were imposed on them in a million repetitions and taken on board mechanically and unconsciously. One tends to understand Schiller’s distich on a ‘cultivated language which writes and thinks for you’ in purely aesthetic and, as it were, harmless terms. A successful verse in a ‘cultivated language’ says nothing about the literary strengths of its author; it is not particularly difficult to give oneself the air of a writer and thinker by using a highly cultivated turn of phrase.

But language does not simply write and think for me, it also increasingly dictates my feelings and governs my entire spiritual being the more unquestioningly and unconsciously I abandon myself to it. And what happens if the cultivated language is made up of poisonous elements or has been made the bearer of poisons? Words can be like tiny doses of arsenic: they are swallowed unnoticed, appear to have no effect, and then after a little time the toxic reaction sets in after all. If someone replaces the words ‘heroic’ and ‘virtuous’ with ‘fanatical’ for long enough, he will come to believe that a fanatic really is a virtuous hero, and that no one can be a hero without fanaticism. The Third Reich did not invent the words ‘fanatical’ and ‘fanaticism’, it just changed their value and used them more in one day than other epochs used them in years.

While the immediate goal of propaganda has always been to overwhelm discernment, the internet has enabled entirely new mechanisms. For example, governments, business, and movements now deploy computational propaganda – a suite of tools that includes automated social media accounts, algorithmic gaming of social media platforms, and artificial intelligence (DiResta, 2018; Frank, 2018). These tools analyze online profiles, identify audiences that are especially susceptible to a particular message, and then target those audiences with tailor-made content through an enhanced delivery system. The importance of computational propaganda combined with more traditional propaganda campaigns cannot be overstated. 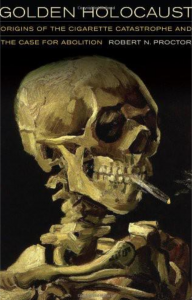 Deadly instance — the cooption of science:

Yet institutions as well as governments have dwarfed these strategies by challenging the very processes of knowledge generation and validation itself (Proctor, 2011). Perhaps the best example of this complex and sophisticated style of propaganda is known as ‘the tobacco strategy.’ To counter a prevailing scientific consensus on the dangers of tobacco, the tobacco industry hired Hill & Knowlton, a public relations firm in the United States, to create a campaign for obstructing the prevailing scientific research that linked smoking to cancer. Their goal was to create doubt about existing science and thereby dispel public concerns and delay legislation (Pinto, 2015). The scale of their effort is important. To create ‘industry friendly’ research that would sabotage scientific knowledge about the harmfulness of tobacco, the tobacco industry hired researchers, established journals including Tobacco Science and Indoor Air, and created their own scientific societies (Proctor, 2011). Let the scope of that sink in for a moment – today propaganda includes the production of scholarly research articles, the establishment of scientific journals, and the creation of scientific societies.

As one might expect, other companies have learned from the tobacco industry.

And, back to our own particular interest,

As well, the Institute for Strategic Dialogue has identified this same strategy among right-wing extremist groups that are using pseudo-science, distorted statistics, and social media to promote the fear that white people are under threat around the globe (Iqbal and Townsend, 2019). If the public trust in scientific research and news media has never been completely rewarded, it has never been more violated.

Propaganda submerges the interests of ordinary people beneath those of corporations and governments. Propaganda effectively uses the language of ideals to obscure otherwise objectionable ends (Stanley, 2018: 24 Link is to Video in Archive.org]. This is particularly evident in right-wing authoritarianism that claims a populist discourse to attract and build support among the so-called working and middle classes while simultaneously undermining their group interests. Anti-media rhetoric, anti-science thinking, and conspiracy theories are all rhizomatic points in propaganda campaigns.

Eventually, with these techniques, fascist politics creates a state of unreality, in which conspiracy theories and fake news replace reasoned debate. 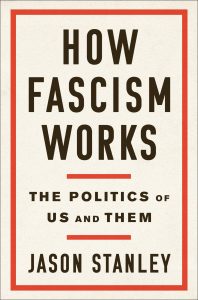 “Fake news” — where have we heard that one before?

Fascist politicians justify their ideas by breaking down a common sense of history in creating a mythic past to support their vision for the present. They rewrite the population’s shared understanding of reality by twisting the language of ideals through propaganda and promoting anti-intellectualism, attacking universities and educational systems that might challenge their ideas. Eventually, with these techniques, fascist politics creates a state of unreality, in which conspiracy theories and fake news replace reasoned debate.

As the common understanding of reality crumbles, fascist politics makes room for dangerous and false beliefs to take root. First, fascist ideology seeks to naturalize group difference, thereby giving the appearance of natural, scientific support for a hierarchy of human worth. When social rankings and divisions solidify, fear fills in for understanding between groups. Any progress for a minority group stokes feelings of victimhood among the dominant population. Law and order politics has mass appeal, casting “us” as lawful citizens and “them,” by contrast, as lawless criminals whose behavior poses an existential threat to the manhood of the nation. Sexual anxiety is also typical of fascist politics as the patriarchal hierarchy is threatened by growing gender equity.

As the fear of “them” grows, “we” come to represent everything virtuous.

Further on we read, with the addition of an example from modern U.S. history:

It’s hard to advance a policy that will harm a large group of people in straightforward terms. The role of political propaganda is to conceal politicians’ or political movements’ clearly problematic goals by masking them with ideals that are widely accepted. A dangerous, destabilizing war for power becomes a war whose aim is stability, or a war whose aim is freedom. Political propaganda uses the language of virtuous ideals to unite people behind otherwise objectionable ends.

U.S. president Richard Nixon’s “war on crime” is a good example of masking problematic goals with virtuous ones. The Harvard historian Elizabeth Hinton addresses this tactic in her book From the War on Poverty to the War on Crime: The Making of Mass Incarceration in America, using diary notes from Nixon’s chief of staff, H. R. Haldeman: “You have to face the fact that the whole problem is really the blacks,” Haldeman quoted Nixon as saying in a diary entry from April 1969. “The key is to devise a system that recognizes this while not appearing to.” In a direct and systematic way, Nixon recognized that the politics of crime control could effectively conceal the racist intent behind his administration’s domestic programs.1 Nixon’s rhetoric of “law and order” that followed this conversation was used to conceal a racist political agenda, one that was perfectly explicit within the White House’s walls.”

Excerpt From: Jason Stanley. “How Fascism Works.” Apple Books. — this time the bolding is my own addition.

Next — Disinformation and fake news . . .

PATV. 2019. Jason Stanley – How Fascism Works The Politics of Us and Them. http://archive.org/details/patvny-JASON_STANLEY_-_How_Fascism_works_The_politics_of_us_and_them.