A false dilemma is seen whenever only two possible options are given when there exist others. (This fallacy is also known as a false dichotomy). For example, a person might insist, “you’re either with me or against me” and hence force the listener to join forces or else be taken as an enemy. In general, we have the following:

The argument seems valid but a premise is missing; namely, something like “P3: No other options other than A and B exist.” It is often used for rhetorical effect; after all, if only two choices are available and one is unpalatable then we are forced to choose the other, even if we might otherwise have reservations.

Some historians have fallen into this fallacious reasoning when addressing Neville Chamberlain’s responses to Hitler. Essentially the argument has been:

P1: Chamberlain had the option to either [A] stand up to Hitler and prevent war or [B] appease him and lead to further demands and world war.

P2: Chamberlain did not [A] stand up to Hitler and prevent war.

C: Therefore, [B] Chamberlain is to be blamed for making the cowardly choices that led to war.

What is missing are other “dilemmas” facing Chamberlain:

or C: Chamberlain believed Russia was a serious threat and believed Hitler would invade east, not west.

or D: Chamberlain feared Japan and Italy would take advantage of Britain being tied down with Germany to overrun British interests in Asia and the Mediterranean.

or E: Chamberlain knew Britain would not tolerate another war given their fresh memories of the horrors of the last one.

As summed up by Paul Newall:

An example of a false dilemma is the choice facing Chamberlain as Prime Minister of the United Kingdom in 1938, where he could either opt for appeasement or war with Germany. Since he chose the former, some historians and commentators have – with the benefit of hindsight – been harsh in their assessments of him and the part he played in leading Britain to war or letting down Czechoslovakia (see Gilbert and Gott 1963 or Namier 1950). However, the argument that Chamberlain failed to address the threat posed by Germany depends on there being no other options, and, after government papers of the time became available, other historians began to point out instead that Chamberlain was worried about the threat posed by the Soviet Union and believed that Hitler would move east, not west, or else that he was struggling to reconcile British interests and responsibilities around the world with its diminishing power (Barnett 1972). Still another factor involved was Chamberlain’s own insistence that he had to be sure that “great issues” were at stake before a declaration of war could be made (The Times, September 28, 1938 [link is to Chamberlain’s radio speech reported by The Times]), and this only became clear in 1939. Regardless of the reasons why Chamberlain pursued a policy of appeasement, then, “appeasement is clearly a highly complex issue and the historical debate is ongoing” (Darby 1999: 83). The claim that his options were “appeasement or war” is thus superficial at best and a false dilemma, one that robs the history of this policy of considerable depth and nuance.

Deserves to be singled out for special condemnation

The fallacy of false dichotomous questions is a special form of the fallacy of many questions, which deserves to be singled out for special condemnation. It arises from the abuse of an exceedingly dangerous conceptual device. Dichotomy is a division into two parts. If it is properly drawn, the parts are mutually exclusive and collectively exhaustive, so that there is no overlap, no opening in the middle, and nothing omitted at either end. These three requirements are very difficult to satisfy in the organization of an empirical inquiry. It is rare that any two historical terms can be so related, unless one of them is specifically defined as the negation of the other. And even then, there is often trouble. The law of the excluded middle may demand instant obedience in formal logic, but in history it is as intricate in its applications as the internal revenue code. Dichotomy is used incorrectly when a question is constructed so that it demands a choice between two answers which are in fact not exclusive or not exhaustive. But it is used often by historians in this improper way. Indeed, a little industry has been organized around it : the manufacture of the “problems” series of pamphlets for pedagogical purposes. These works conventionally begin with a false dichotomous question, allegedly designed to “stimulate” thought. The question takes the form of “Basil of Byzantium : Rat or Fink?” Maybe Basil was the very model of a modem ratfink. Maybe that Byzantine character was neither a rat nor a fink, but something vastly more intricate, or something altogether different. But swarms of suffering undergraduates are asked to study a set of pedantical essays, half of which are exaggerated arguments for the cattiness of Basil and the other half are overdrawn portraits of Basil as a fink. The disgusted undergraduate is expected to make a choice between these unappetizing alternatives, or perhaps to combine them in some ingenious paradoxical contrivance of his own invention, which falsifies both his understanding and the problem itself. The following examples are the actual titles of works which have been edited by reputable professional historians and issued by respectable publishers such as Holt, Rinehart; Prentice-Hall ; Houghton Mifflin; Random House ; and D. C. Heath :

The Causes of the War of 1812: National Honor or National Interest?

The Abolitionists: Reformers or Fanatics?

The Removal of the Cherokee Nation — Manifest Destiny or National Dishonor?

The Robber Barons — Pirates or Pioneers?

The New Deal — Revolution or Evolution?

Feudalism — Cause or Cure of Anarchy?

The Medieval Mind — Faith or Reason?

The Parliament of Edward I — Royal Court or Representative Legislature?

The Absolutism of Louis XIV — The End of Anarchy or the Beginning of Tyranny?

The Scientific Revolution — Factual or Metaphysical?

The Industrial Revolution in England — Blessing or Curse to the Working Man?

The Fall of the Russian Monarchy — Inherent Failure or Planned Revolution?

The Origins of Nazi Germany — German History or Charismatic Leadership?

What Is History — Fact or Fancy?

Many of these questions are unsatisfactory in several ways at once. Some are grossly anachronistic; others encourage simple-minded moralizing. Most are very shallow. But all are structurally deficient in that they suggest a false dichotomy between two terms that are neither mutually exclusive nor collectively exhaustive. They are also imprecise, both in the dichotomous terms and in the troublesome connective “or,” which might mean “either X or Y but not both” (like the Latin aut), or “either X or Y or both” (like the Latin vel) , or “either X or Y or both, or neither.” This ambiguity is not often clarified in context, and the reader receives no clear indication of what he is being asked to accomplish.

The “problems” that appear in these pamphlets are not merely a result of faulty pedagogical practice. Many of these titles reflect a false dichotomy which is deeply embedded in scholarly literature on the subject at hand. They are illustrations not only of the way in which many historians teach but also of the way in which they conceptualize and carry on their own research.

What can a student do, in the face of a false dichotomy? He can try several stratagems. First, he might attempt to show that the dichotomous terms can coexist. Second, he might demonstrate that there is a third possibility. Third, he might repudiate one or the other or both alternatives. All of these devices will work, in a limited way. But all of them will have the effect of shackling the student’s answer to the fallacious conceptualization he is attempting to correct. The most satisfactory response, I think, is to indicate the structural deficiencies in the question-framing and to revise the inquiry on that level, by the introduction of a more refined and more open question, which can be flexibly adjusted as the analysis proceeds.

The problem of an exclusive choice between nonexclusive alternatives is often confronted in declarative as well as interrogative sentences. The motto of the Prince of Orange was Non rapui sed recepi, which means, “I didn’t steal; I received.” But maybe he was a receiver of stolen goods, even if they were stolen in a glorious cause. In this question, as in so many others, one can only endorse the sensible observation of Reuben Abel: “The continuum in which we live is not the kind of place in which middles can be unambiguously excluded.”

I remember those “problems in history” series titles well. Some others on my bookshelf:

The Renaissance: Medieval or Modern?

The Industrial Revolution in Britain: Triumph or Disaster?

We usually concluded the dichotomy was false and that, thanks to tutors and other teachers, there was so much more to understand and learn than the alternatives suggested.

Not so long ago a little kerfuffle blew up on the internet over Nixey’s attempt to push against a fairly widespread notion that the rise of Christianity was not responsible for the loss of learning that is associated with what we label the “Dark Ages”. Reactions of some were vicious: my little attempt to point out the error of the either-or approach was also attacked by some.

Many questions in biblical studies focus on whether a narrative reflects something that really happened or not. Recall Thomas L. Thompson’s statement: 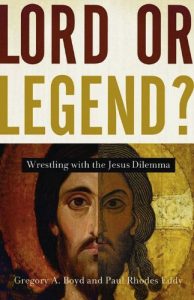 True or false? Historical or mythical? The pursuit of a choice between those alternatives takes us on a pathway that detours the real origins and functions of the biblical literature. (I won’t repeat here any of the extract I cited from Thompson’s discussion in that post.)

Related to that question is another that seems quite common: If Christianity did not begin at least approximately as the historical narrative of the gospels suggests then it must be a fraud, a hoax, a deliberate deception or conspiracy foisted on the world.

I think it is much more interesting — and in keeping with the available sources — to explore what we can of the origins and nature of the New Testament literature than limit oneself to investigating a possible Dan Brown type fraud.

Newall, Paul. “Logical Fallacies of Historians.” A Companion to the Philosophy of History and Historiography, edited by Aviezer Tucker and Mary Kane, Wiley-Blackwell, 2009, pp. 262–73.

4 thoughts on “Logical Fallacies of Historians: the False Dilemma (Dichotomy)”