While doing a little background research on folklore and oral tradition, I happened upon something written by David Aune that confused me. Aune edited The Blackwell Companion to the New Testament, and wrote the chapter on form criticism (pp. 140-155).

You probably recognize Wiley-Blackwell’s well-regarded Blackwell Companions to Religion series. Generally, I admire their clarity and reliability, so when I read Aune’s remarks regarding Karl Ludwig Schmidt, I was taken aback.

One of the corollaries of the view that the Jesus tradition originally circulated in relatively short oral units is that the framework of the life of Jesus in the gospels has no claim to historicity. K. L. Schmidt, who did not himself use the term “form criticism,” argued that Mark was made up of short, originally independent episodes or pericopae that were linked together editorially by a variety of chronological and geographical bridge passages inserted by the evangelist with the intent of creating a connected narrative. (Aune 2010, p. 142, emphasis mine)

The problem, as you can see immediately, is that Schmidt did use the term form criticism (Formgeschichte). In fact, the editors of the RGG II specifically asked him to write the section on it (see volume II, “Formgeschichte” pp. 639-640). He also used the term in his 1923 work, The Place of the Gospels in the General History of Literature, acknowledging the methodology in section A.5 — “Methodologisches: Literarkritik und Stilkritik (Formgeschichte).” So, what could Aune have meant? END_OF_DOCUMENT_TOKEN_TO_BE_REPLACED 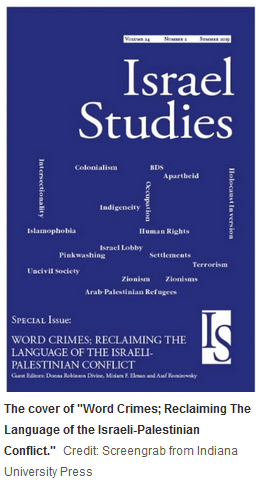 A recent Haaretz article discusses controversy over a special issue of the Israel Studies journal that criticizes terms such as occupation and genocide used to refer to Israel vis à vis the Palestinians, as well as references to the Israel Lobby and claims that criticism of Zionism is not to be equated with anti-Semitism:

The lead article by Donna Divine, “Word Crimes: Reclaiming The Language of The Israeli-Palestinian Conflict”, introduces the issue and is free on Jstor. (Unfortunately most of the specialist articles themselves have a price tag and I have not yet seen how or even if the issue itself is available for purchase at a reasonable cost.)

“the [journal’s] ‘alternative dictionary’ appears designed to provide talking points for anti-BDS and pro-‘hasbara’ efforts, and does not serve an academic purpose.”

an invented field that is nothing more than a cover for the Israeli Strategic Affairs Ministry.

He charged that the articles published in the journal “make a mockery of academic rules” and would never have passed muster in a serious academic publication.

“This attempt to suppress critical voices and dissenting views within the [association] is a microcosm of the larger assault on liberal voices and institutions in Israel. . . .

“Ironically . . . the [association] itself was created with the aim of procuring a forum where Israel may be analyzed with the tools common to the social sciences and humanities, to free the study of Israel from the bonds of political loyalty and subservience in which it was enmeshed. That accomplishment, academic
autonomy, is threatened now by the repoliticization of the study of Israel through the criminalization of scholarship and assault on academic freedom.”

Another, Ian S. Lustick, oberves that

almost all the contributors to the ‘Word Crimes’ issue are members of Scholars for Peace in the Middle East — a straightout advocacy organization.

But a co-editor of the special issue, Miriam F. Elman, responded that such criticisms were “an ugly smear campaign” and certain demands of critics amounted to “academic thuggery”:

there will be no caving in to this bullying. I believe we are talking about a very small minority, as very few scholars would run roughshod over academic freedom in this way.”

So what’s in this special issue? As explained at the beginning I only have access to the lead article so I quote a few sections of that. You can make up your own minds, though I will not be able to resist a couple of mumbles of my own.

Excerpts from Donna Divine’s Word Crimes: Reclaiming The Language of The Israeli-Palestinian Conflict

(Not quite sure why I’m doing this. As I said at the outset anyone can read the whole article for free via Jstor. But for any lazy buggers who can’t be bothered here is my selection of hightlights.)

the Jewish state, today, stands accused of practicing apartheid, genocide, ethnic cleansing, and of sustaining itself as a remnant of an outdated and thoroughly delegitimized colonial order.

The language under criticism

identifies Israel not simply as a force hostile to Palestinian interests but also as a major source of evil for the world.

(Donna Divine’s essay also concludes with a discussion of the use of this term in the discussion.)

The United Nations definition of genocide:In the present Convention, genocide means any of the following acts committed with intent to destroy, in whole or in part, a national, ethnical, racial or religious group, as such:

genocide is now defined as a Zionist impulse. A word that once engendered sympathy for Jews has been contaminated by becoming a rubric describing Israeli policies and a reason to fear Jewish power. . . . .

Think of “Deir Yassin”, the name for Palestinian suffering before the naqba. Millions of people across the globe know something of this village as the site of a massacre and the bonfire it made of Israel’s moral authority in waging its war for independence. . . . .

Tauber’s book [compare blog post] does not remove the stain of war crimes from the Irgun forces fighting in the village, but it does contest the scope of the brutality in that fateful attack in April 1948. Even to raise questions about whether a massacre occurred at Deir Yassin, however, is considered a transgression as Tauber learned from the several American university presses refusing to publish his book, one deeming it “unfit for English readers”. . . . it has had a profound impact on closing down the possibility of following the best available evidence.