We have posted on Jason Burke’s books on Islamist terrorism (The New Threat: The Past, Present and Future of Islamic Militancy and Al-Qaeda: Casting a Shadow of Terror) so I was interested in read what Jason had to say about the recent terrorist attack in The Guardian, “What does Christchurch attack tell us about rightwing extremism?”

What stood out most for me was his reminder that terrorist attacks in the 1970s and 1980s took far more lives in Europe than have modern Islamist attacks. I have copied the relevant section from Wikipedia: 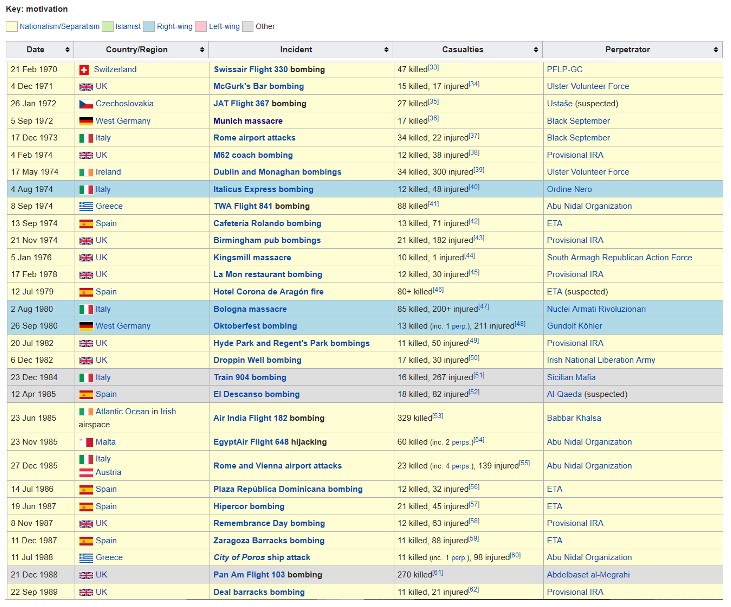 Burke observes similarities between the current rightwing terrorists and the Islamists:

Though there are substantial differences, rightwing and Islamist extremism, and extremists, share a great deal. The basic mechanics of the process of radicalisation – by peers, through the Internet or otherwise – are very similar. As is the way both forms of violent activism are on the fringe of a much broader movement, much of which has bled into the mainstream in different parts of the world. There are no “lone wolves”, at least not in the sense of a solitary actor without links, whether virtual or real, to others.

In a “manifesto” published online by the suspect in the Christchurch attack, for instance, he said he was not a “direct member” of any group or Organisation but had interacted with, or donated to, many.

(bolding in all quotations is my own)

That reminds me of Denis Rohan who attempted to burn down the Al Aqsa mosque in Jerusalem way back in 1969. The news media said he claimed to be a member of the Worldwide Church of God but also that he found himself prophesied in the Bible (Rohan = biblical Nahor backwards) but in fact he was never a member, though he was what the church called a “coworker” — that is, one who does not join but takes an interest as an outsider and donates financially from time to time. So the outsider status is not unique to the days of the internet.

Another shared element is the belief that “resistance” to tyranny is not just acceptable but an obligation. Islamist militant thinkers say rulers or regimes should be overthrown if they stand in the way of the rule of the enlightened and faithful. Rightwing extremists also see the government as the oppressor of their imagined community, defined by “race” and sometimes faith, the authority of which should be rejected and sometimes fought.

Both Islamists and rightwing extremists believe their communities are facing an existential threat, placing an obligation on the individual to fight back. For the Islamists, the belief that a belligerent west has been set on the humiliation and exploitation of the world’s Muslims for the best part of 1,000 years is axiomatic.

Add to the above the glorification of respective historical narratives:

Islamist militants invoke the battles of the earliest Muslim generations, the crusades and then the decline of great Islamic empires that for much of the past 1,300 years were infinitely richer, more powerful and more sophisticated than their western counterparts.

The Christchurch suspect invokes the battle of Tours, a defeat of a Muslim raiding army in 732, and the Siege of Vienna in 1683.

We spoke of the demonizing historical narratives of each side in the previous post.

Burke was particularly addressing the common trajectories of both Islamist and rightwing terrorism.

followed by a massive and spectacular strike that often inflicts significant damage and casualties but focuses minds and eventually resources.

Counterterrorism agencies, driven by public outrage and concerned officials, struggle for a time to gain the upper hand

until, with better funding and understanding, they begin to win the battle to keep us safe.

The cycle can take many years, even decades.

Regrettably Burke notes that “many specialists” fear we are not yet at that final turnaround point where authorities begin to get the upper hand on rightwing terrorism. The necessary “resources and attention” have yet to be applied to that threat.

Last year, the former head of the Metropolitan police’s counterterrorism unit said the UK had not “woken up” to the threat posed by the far right. In the US, experts at the Soufan Centre, founded by the former FBI special agent Ali Soufan, described a “long-running US double Standard with concerns over crime and terrorism that are inspired by the narrative of Bin Ladenism versus crime and terrorism inspired by right-wing ideology”.

9 thoughts on “Rightwing Terrorism in Context”