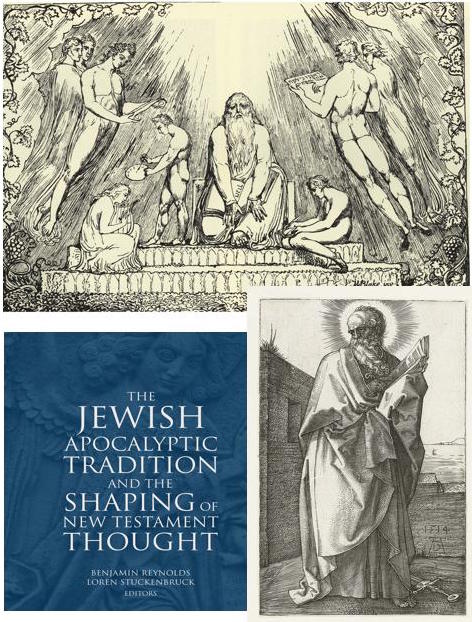 Professor James M. Scott compares two letters, one by Enoch and the other by Paul, and identifies a few points in common that help us understand a little more clearly the thought-world of both figures. Of course our real interest is in understanding Paul since we tend to see him as having more relevance to our Christian heritage than the evidently mythical Enoch.

Scott’s essay, “A Comparison of Paul’s Letter to the Galatians with the Epistle of Enoch” is a chapter in The Jewish Apocalyptic Tradition and the Shaping of New Testament Thought (2017, edited by Benjamin E. Reynolds and Loren T. Stuckenbruck). The central argument is that both Paul’s letter to the Galatians and the epistle of Enoch (1 Enoch 92-105) share the same apocalyptic motifs in a common letter format, and that it follows that Galatians belongs to the “apocalyptic tradition” as much as does the letter of Enoch. My interest is in the shared motifs per se, and what they indicate about Paul’s intellectual world.

1 Enoch is generally thought to be made up of five texts that have been stitched together, and one of these initially discrete texts consists of chapters 92 to 105, dated around 170 BCE. If you have sufficient time, patience and interest to read those chapters and have just a vague recollection of Paul’s letter to the Galatians you will wonder how on earth anyone could see the slightest resemblance between the two. Enoch’s letter is full of Old Testament style pronouncements of prophetic woes and doom on sinners while Paul’s letter is about struggles with Judaizers coming along to his converts in Galatia and undermining the pristine faith by telling them they had to be circumcised and follow a few other Jewish observances, too. But a glance at James Scott’s publishing history shows he has spent a lot of time studying all of this sort of literature so let’s continue in faith.

First, look at some “technical” similarities to see that, despite major differences, we are comparing a works of the same genre, a letter form. (The text follows Scott’s chapter closely, though of course the table format is mine.)

Okay, that’s done with the “formalities”. We may say that technically we are comparing apples and apples. James Scott’s next section is more interesting for an insight into how much we read in Paul’s letter was part of the wider thought-world of the day and not “just Paul”. Scott turns to their common “apocalyptic elements”. END_OF_DOCUMENT_TOKEN_TO_BE_REPLACED