Ooh the irony the irony!! Back in 2012 when Anthony Le Donne read Vridar’s review of his book on Authenticity he could not resist dropping a complimentary comment here on Vridar:

Hi Neil, anthony here. Thanks for your very elaborate review! I realized that I hadn’t added your blog to our blogroll. This oversight has been corrected. Looking forward to more segments.

Now the same book appears in another online article and bam! Our good professor has done a 180 degree turnabout!

Anthony Le Donne has posted the a complaint that Valerie Tarico and David Fitzgerald “misrepresented” a book he edited/wrote with  (Dr.) Keith. (Le Donne is addressing lay critics so it is important to impress with the title of who is speaking here.)

Associate Professor Le Donne tells his blog readers that the motive for this blatant “misrepresentation” by Tarico and Fitzgerald was to serve “a clickbait agenda”. Of course. Do not engage with the critics. Impute their motives. Denigrate them as unworthy charlatans.

Finally, Dr Le Donne declares that “clearly” neither Tarico nor Fitzgerald have actually read their (Keith and Le Donne’s) book.

In fact what Tarico and Fitzgerald said about it was nothing more the blandest summary of what I expressed in depth in the review Le Donne was so chuffed to see me write.

In all, I can spot three misrepresentations by anthony (as he initially introduced himself to me and evidently prefers to be known among his peers and sympathetic readers). I love the way the associate professor avoids discussion of exactly where any misrepresentation lay on the part of the authors of the article and what the article actually said about the book.

Valerie and David’s “clickbait” link he is complaining about is found at: Evidence for Jesus is weaker than you might think.

Vridar has posted several more times on the book, too. You can see our posts discussing it at the Keith/LeDonne: Jesus Criteria archive.

I would be interested in knowing exactly what I or David Fitzgerald have ever actually written about the book is a “misrepresentation” of it. 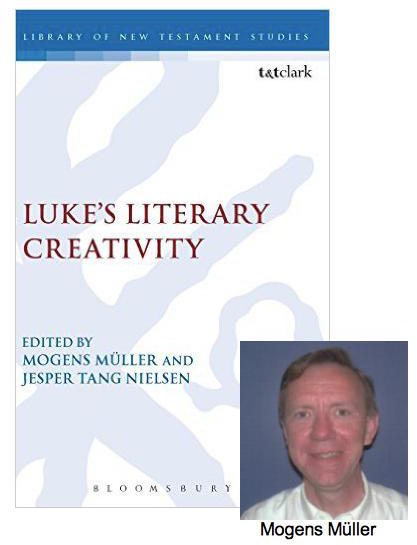 This post selects a few of the highlights from Mogens Müller’s chapter in Luke’s Literary Creativity (2016) in which he presents a case for Acts being a “biblical rewriting of the gospels and the letters of Paul”. I omit several important questions that his thesis raises and that he addresses in the same chapter, attempting to focus here exclusively on some of the indicators that Acts could be such a rewriting.

Müller accepts the possibility that Luke-Acts was written well into the second century, possibly even as late as the 140s, as a revised foundational story for the church. Such a late date should not be a problem, Müller suggests, if we no longer accept that the author did not use Q as one of his sources but knew of and included both Matthew and even possibly John as among the previous lives of Jesus that he was critical of in his introduction. (For other arguments that Luke and Acts in their current canonical form were a mid second century product see the archive on Tyson‘s book and links within those posts to related archives.) Müller even points to recent scholarship that allows for the work of Papias as a possible source for the author of Luke-Acts.

Inclusion of the Non-Jewish World

If Paul’s letters are our oldest surviving Christian documents and the authors of our first gospels, Mark and Matthew, needed to find a way to explain how gentiles came to be incorporated into a church supposedly founded by a Jewish teacher in Galilee, we know they found the solution by creating “proleptic episodes and teaching” in their stories of Jesus. END_OF_DOCUMENT_TOKEN_TO_BE_REPLACED