The first part of this series concentrated on Hasert’s research into the relationship between the gospels of Luke and Matthew. Here we examine the evidence for the connections between the Gospel of Luke and Paul’s life and letters. But we begin with what Hasert interpreted as the third evangelist’s denigration of the Twelve, especially when contrasted with their treatment in the Gospel of Matthew. (See the previous post for bibliographic and author references.)

Salt of the earth no more

Matthew’s Jesus addresses his (twelve) disciples and tells them they are the salt of the earth (5:13). Luke omits those words; Luke’s Jesus does not so compliment the twelve.

Luke finds a vicious way to twist the knife into the Twelve when he moves the scene of the disciples arguing amongst themselves about who will be the greatest into the Last Supper, immediately after Jesus told them that one of them would betray him.

21 But the hand of him who is going to betray me is with mine on the table. 22 The Son of Man will go as it has been decreed. But woe to that man who betrays him!” 23 They began to question among themselves which of them it might be who would do this.

24 A dispute also arose among them as to which of them was considered to be greatest. 25 Jesus said to them, “The kings of the Gentiles lord it over them; and those who exercise authority over them call themselves Benefactors. 26 But you are not to be like that. Instead, the greatest among you should be like the youngest, and the one who rules like the one who serves. 27 For who is greater, the one who is at the table or the one who serves? Is it not the one who is at the table? But I am among you as one who serves. 28 You are those who have stood by me in my trials. 29 And I confer on you a kingdom, just as my Father conferred one on me, 30 so that you may eat and drink at my table in my kingdom and sit on thrones, judging the twelve tribes of Israel.

Such a relocation of this incident makes a complete mockery of the disciples, intimating that they are ironically disputing over which of them would betray Jesus.

We know Matthew’s famous moment when Jesus declared Peter to be the possessor of the keys to the kingdom and the rock upon which the church was to be built (16:18-19). Luke’s Jesus finds no occasion on which to bestow such honourable status upon Peter.

In Matthew 12:49 Jesus once again confers special status upon his disciples:

Pointing to his disciples, he said, “Here are my mother and my brothers. (NIV)

Luke, on the contrary, has Jesus say that any and everyone (not only his disciples) who hear and do the words of Jesus are his mother and brothers, (8:21):

He replied, “My mother and brothers are those who hear God’s word and put it into practice.” (NIV)

Who is the faithful servant?

Hasert interpreted Luke’s account of Jesus contrasting the faithful and unfaithful servants as symbolic of Paul and Peter, 12:41-45:

41 Peter asked, “Lord, are you telling this parable to us, or to everyone?”

42 The Lord answered, “Who then is the faithful and wise manager, whom the master puts in charge of his servants to give them their food allowance at the proper time? 43 It will be good for that servant whom the master finds doing so when he returns. 44 Truly I tell you, he will put him in charge of all his possessions.45 But suppose the servant says to himself, ‘My master is taking a long time in coming,’ and he then begins to beat the other servants, both men and women, and to eat and drink and get drunk. (NIV)

With Paul’s description himself as a faithful servant in mind Hasert saw the faithful manager of the household in Luke 12 as an allusion to Paul. Notice Paul’s self-portrayal in 1 Corinthians 4:1-2:

This, then, is how you ought to regard us: as servants of Christ and as those entrusted with the mysteries God has revealed. 2 Now it is required that those who have been given a trust must prove faithful. (NIV)

In Luke we find “the Twelve are accused of

Enter the Seventy to set the standard

Recall also Matthew’s Jesus forbidding the disciples to go to the gentiles and least of all to the Samaritans (Matthew 10:5).  Luke sets up a sharp contraposition between the sending of the Twelve and the commissioning of the Seventy. The Seventy are apparently

appointed in Samaria and sent to preach the Gospel to the Samaritans, i.e. non-Jews, which stands in complete contradiction to Matt 10.5. (p. 13)

We mentioned above Hasert’s suggestion that Luke’s faithful and wicked servants represent Paul and Peter. Other allusions to Paul in the Gospel of Luke, according to Hasert, are found in Jesus’ mission for the Seventy: e.g. snakes will not harm them: Luke 10:19 and Acts 28:3-6

13 Someone in the crowd said to him, “Teacher, tell my brother to divide the inheritance with me.”

14 Jesus replied, “Man, who appointed me a judge or an arbiter between you?” (NIV)

51 Do you think I came to bring peace on earth? No, I tell you, but division. 52 From now on there will be five in one family divided against each other, three [James, Peter, John – Gal 2.9] against two [Paul and Barnabas; later Paul and Luke – Gal 2.9, 2 Tim 4.11] and two against three. 53 They will be divided, father against son and son against father, mother against daughter and daughter against mother, mother-in-law against daughter-in-law and daughter-in-law against mother-in-law.” (NIV)

57 “Why don’t you judge for yourselves what is right? 58 As you are going with your adversary to the magistrate, try hard to be reconciled on the way, or your adversary may drag you off to the judge, and the judge turn you over to the officer, and the officer throw you into prison. 59 I tell you, you will not get out until you have paid the last penny.” (NIV)

The language of Luke shows many similar feature with that of Pauline epistles. Hasert does not make any distinction between authentic and non-authentic epistles; he does provide, though, a considerable number of examples form the first group. (p. 14)

I find some of the above suggested allusions to Paul in the Gospel of Luke to be strained (e.g. the division between two and three is paired with divisions among fathers and sons, mothers and daughters, and would expect that there should be similar allusions in those roles as well; besides, the account of divisions and warnings directed at both parties hardly seems to favour Paul over Peter). But I do remind myself that I am only reading a summary of a summary. I don’t have access to Hasert’s 1845 original, Die Evangelium, ihr Geist, ihre Verfasser und ihr Verhältnis zu einander.

More positively I will conclude some of the examples of similarities between the language in Luke’s Gospel and Paul’s epistles that Wittkowsky finds stronger than others:

Other researchers conclude that the final canonical form of the Gospel of Luke was finalised as late as the mid second century, around the same time as the pastoral epistles in Paul’s name appeared. If Hasert finds as many similarities in Luke to the non-authentic Pauline letters as he does to the authentic Paulines, I would suggest that that is additional data to be used in support of the thesis that the final author or redactor of the Gospel of Luke (and Acts) was not so much a follower of Paul (that is, not the Luke who supposedly accompanied Paul in his life-time) but was as interested in reshaping Paul to make him suitable for “orthodoxy”. If we hold back from seeing as many or as trenchant criticisms of Peter in Luke’s gospel as Hasert does, we may instead notice a more dedicated focus on a narrative that attempts to unite, to equalise, the factions of Paul and Peter.

Nowadays this problem is not a broadly discussed one. At the SNTS Annual Meeting in Louvain (2012) Michael Wolter in his response to a paper by Daniel Marguerat pointed at a large number of similarities between the texts of Luke and Paul, asking for an explanation. Unfortunately, Marguerat had no explanation for this fact; it seems that no answer can be found either in all the main commentaries of the last one hundred years which insist on assuming Luke’s ignorance of Pauline letters. See, however, Goulder, Luke, 129-46 (Chapter 4: “Paul”) (p. 14) 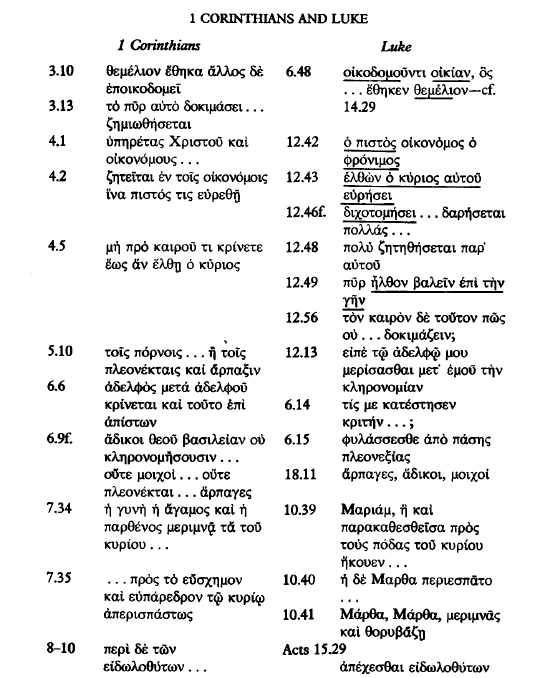 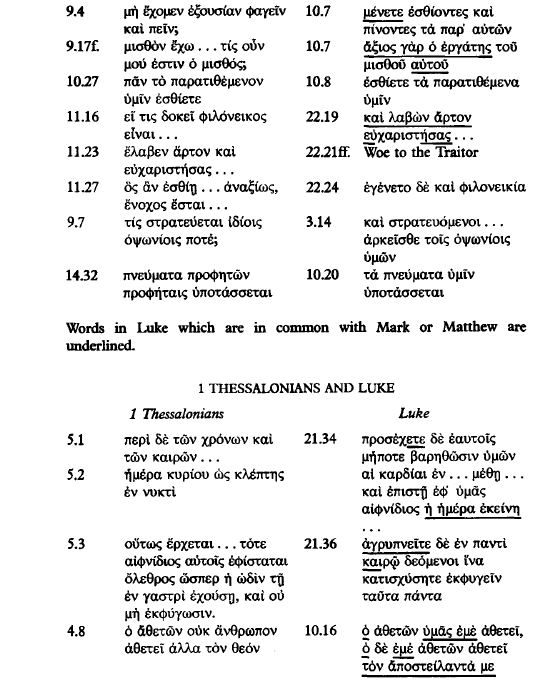