It is easy to think that scholarly interest in the historical Jesus stands independently from the Christ of faith and theological preferences. Don’t theologians “doing history” on the “historical Jesus” come up with a figure who does not align with the Jesus of their faith? Don’t theologian-historians deserve to be credited with hard-nosed intellectual integrity for “discovering” such a real-world Jesus?

My views [that the historical Jesus’ disciples believed he was the Christ before his death] are based on the scholarship of one of the great New Testament of the twentieth century, whom most of my readers here (possibly all of them!) have never heard of, Nils Dahl, a Norwegian scholar who taught for many years at Yale University.  Dahl was an amazingly insightful scholar who preferred writing essays to writing books.  When I was in graduate school I and all of my colleagues were heavily influenced by Dahl’s insights (e.g., in his book The Crucified Messiah). . . . (Bart Ehrman, Jesus the Messiah Before the Resurrection)

Bart Ehrman and Larry Hurtado have reminded us of the influence of the Norwegian theologian and Yale professor Nils Alstrup Dahl so I have been following up their notices to learn more about the sorts of things he taught. One of Dahl’s chapters in The Crucified Messiah is “The Problem of the Historical Jesus”. What he says about the importance of the study of the historical Jesus for theology and faith is interesting.

David Strauss had written a book undermining the historical plausibility of many of the accounts of Jesus in the gospels. Dahl addresses the significance of Strauss:

The crisis called forth by Strauss led to an even more intensive preoccupation with the historical Jesus. Thereafter the Life-of-Jesus research not only stood under the aegis of the struggle for freedom from dogma, but also under that of the apologetic defense against Strauss. In the period of empiricism there was also the desire to erect a secure historical basis for Christian faith.  It was assumed that the necessary basis in the sources had been found by means of the Marcan hypothesis and the two source theory. (p. 51)

What lay behind the critical investigations into the historical value of the gospels is also of interest.

The Life-of-Jesus research, in its classic period of the nineteenth century, was in the main a gigantic attempt to get free from the [Chalcedonian] christological dogma of the church, but at the same time to maintain the uniquely religious significance of Jesus. (p. 50)

Albert Schweitzer saw right through this dogmatic agenda of historical Jesus studies when he wrote:

He is a figure designed by rationalism, endowed with life by liberalism, and clothed by modern theology in an historical garb. (p. 56)

That particular historical Jesus had to some extent been influenced of the “history of religions school” with its close attention to other dying and rising gods in the Greco-Roman world. More conservative scholars reacted as follows:

The conservative theologians showed a preference for the Jewish background in order to find a support for the historical credibility of the gospel tradition. (p. 57)

But there was a looming threat. Radical criticism could take Jesus right out of the church altogether and comparisons with other ancient religions led to the very questioning of the historicity of Jesus himself:

At first it appeared that the radical Gospel criticism and the history-of-religions school would lead to the assumption of an unbridgeable gulf between Jesus and the church; in this situation it is quite understandable why outsiders proceeded to deny the historical existence of Jesus. (p. 82)

So it was imperative that the study of the historical Jesus be kept in “godly hands”:

The curiosity which underlies all science will certainly lead to a continually new treatment of the problem. If we theologians ignore this task, others will undertake it. Even if the question should be theologically irrelevant (more of this later), we cannot call it illegitimate. The scientific ethos requires that we do not avoid it, but rather work at it in all sincerity, for God’s law lies behind the scientific ethos. The historical critical concern with the problem of the historical Jesus is at least an honorable task which is subject to the distress and promise of every honorable profession, and certainly to the Pauline hos me (“as if not”) as well. (pp. 62-3)

Although god-fearing scholars should be the main body of researchers it was also necessary to include a non-Christians (even Jews!) as well for the following reason:

Scholars with different starting points co-operate and are able mutually to correct each other. For that reason also, it is not desirable that non-Christian scholars remain aloof from this work. In certain respects even antipathy can be illuminating; Jewish scholars, e.g., can have a clear eye for what is characteristic of Jesus. (pp. 63-4)

But is there not a risk that some historical Jesus findings will stand at odds with the Jesus of religious beliefs?

Dahl is not perturbed. Most believers would scarcely be aware of the scholarly studies or if aware of them they could safely ignore them:

It is obvious that the Christian faith and the church would have only a very limited interest in such a presentation of what actually occurred, even if it could be given with a very high degree of historical probability. . . . The believing community could therefore tranquilly disregard the historical description of Jesus’ death and his previous life for the sake of holding to the Gospels and to the rest of the New Testament writings. Once more it would be clear to the church that only the resurrection of Jesus from the dead and the witness of the Holy Spirit through the apostles disclose the meaning and the significance of Jesus’ death and his previous life. It will therefore firmly maintain that in the New Testament and nowhere else is it revealed who Jesus really was — without being required to contest the results of historical science. (pp. 75-6)

But what of the theologians themselves? They could scarcely ignore the research. Besides, a communications revolution has happened since Dahl wrote and the academic research has no longer been well hidden from lay believers. The benefits of historical Jesus studies for the faith of theologians (and since Dahl, for the better informed lay Christians) are most remarkable indeed . . . .

One thing has become clear, however: incarnation signifies not only the assumption of an abstract human nature by the godhead, but that the Word really became flesh, concrete, human history. By making this clearer, historical research has contributed toward clarifying the offence of the Christian message and the possibility of its scandal. In this way the Jesus research can occasion offences and inner conflicts from which many difficulties for Christianity have arisen and may still arise. But this has not made it more difficult to have a living faith—at all events not more difficult than in the first period of the church when there was still an immediate remembrance of Jesus as a man among men and when the foolishness and the offence of the cross were not yet tempered by a traditional symbolism. The possibility of offence was not less for the contemporaries of Jesus than for us who today can make him an object of historical research. By having made this clear, historical research can help us to hear the word of the Master with new joys “Blessed is he who takes no offence in me.” Whoever in anxiety over Christianity wishes to keep critical-historical research away from Jesus should ask himself whether or not he in reality is seeking to avoid the possibility of the offence and the inner conflict in which faith must now live in the world. (pp. 76-7)

Dahl then reminds readers of the wisdom of Paul’s “refusal to know Christ after the flesh”. What is necessary for faith is not the mundane “how” of what Jesus did in this life but the meaning of his death and resurrection and that God was working all this out through the historical Jesus, whatever form that may have taken.

How strong is your faith? 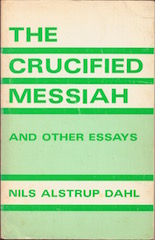 (So next time you hear a theologian boasting of his intellectual integrity as evidenced by his studies leading him to a Jesus at odds with his “former” faith, ask whether he is really boasting about his intellectual honesty or whether he is boasting about the power of his faith. And if he happens to have lost his faith, even perhaps becoming a Jew!, understand the necessity of his place as it has been cultivated by his theologian peers.)