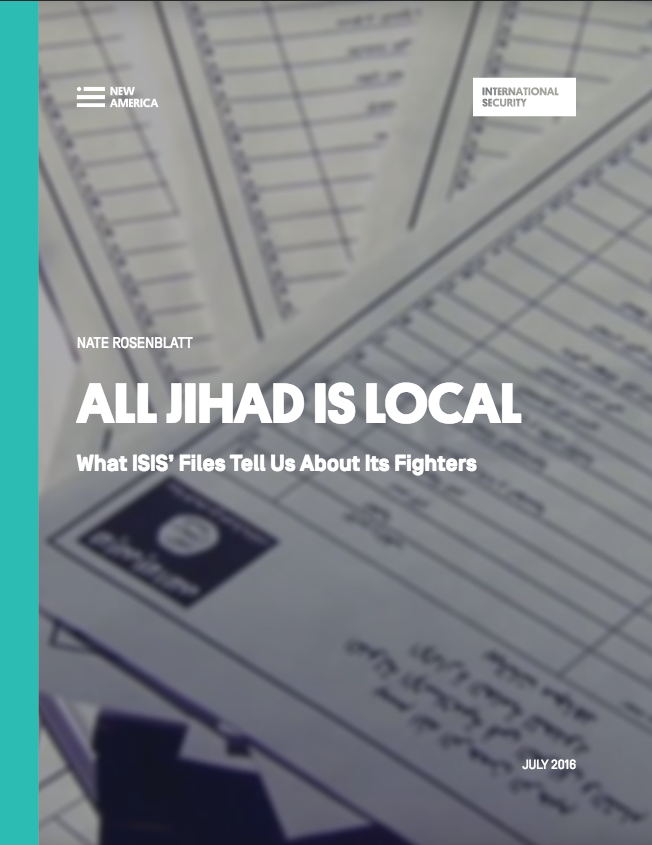 Some interesting research datasets relating to who joins ISIS have been published by Nate Rosenblatt. They make interesting reading alongside other research into the motivations and profiles of who are the most likely candidates for extremist radicalization. The data was supplied by an ISIS defector so of course must be assessed with that in mind.

Nate Rosenblatt sums up his findings in three points:

Foreign fighters joining ISIS are geographically, demographically, and socioeconomically diverse. Fighters from Xinjiang, China are generally older and poorer and tend to travel to ISIS territory with their families, while fighters from Muharraq, Bahrain are far younger, relatively wealthier, and unmarried.

Local interventions could prevent the spread of radical ideology before it takes root. Motivations for foreign fighters are derived from highly specific local conditions, and so must the solutions.

The first point carries an echo (I won’t say anything stronger than an echo) of what Robert Pape’s research into suicide terrorism between 1980 and 2003 found. The second point coheres with what has become common knowledge by now, but what Rosenblatt has done is to examine the data at subnational (regional) levels and found that at that level the diversity at a national or global level disappears. And that leads in to the third point which reinforces other findings that point to personal grievances, feelings of social isolation and craving for a meaningful and adventurous life in a cause bigger than oneself are highly significant factors.

[Please, if anything in that paragraph offends you enough to want to leave a hostile comment I would ask you to by all means comment but do not just do so as a troll. Be prepared to engage in a discussion of the details of the evidence behind our respective views.]

The report is titled All Jihad is Local: What ISIS’ Files Tell Us About Its Fighters — The link is to a 13 MB, 44 page PDF file.

Few pages, many megabytes — that’s because there are lots of cool and colourful maps and tables to make for easier cerebral digestion.

Voice of America has a website discussing the report, too, and there it is stated:

But a new analysis of the terror group’s own entry records suggests while those flocking to the self-declared caliphate come from diverse regions and from a variety of socio-economic background, many share a deep-seated resentment of where they live.

And the study suggests it is a sentiment that IS managed to expertly exploit once and could possibly exploit again.

“I think this grievance narrative is a common thread that you can knit across a lot of these places,” said Nate Rosenblatt, an independent researcher and author of the New America Foundation report, All Jihad is Local.

“It’s not just that these frustrations drive people to go join ISIS in these areas but that ISIS also actively recruits based on that same narrative,” he said, using an acronym for the terror group.

So ISIS market their barbarism with high tech methods and up to date targeted marketing techniques.  There is a Loopcast audio interview with Rosenblatt in which he describes families migrating together from Xinjiang province in China as a response to ISIS film showing them images of better lives for their children in the ISIS Caliphate, whereas younger individuals leave from Bahrain in response to videos playing on the injustices of the monarchical state there.