This post continues my reading and thoughts on chapter 11 of ‘Is This Not the Carpenter? : The Question of the Historicity of the Figure of Jesus. This volume, as I understand it, was published in the hope of introducing the question of the historicity of Jesus to a scholarly audience by means of articles written by scholarly peers. That is, it was meant to be a scholarly re-opening of the question of Jesus’ historicity from among the respected scholarly ranks of biblical scholars as opposed to recent serious authors outside the guild of New Testament academia (e.g. Doherty, Wells, Ellegård, Zindler). The result is a mixed one, in my opinion. Some chapters are excellent; too many are poorly edited or scantily proof-read though with some gold nuggets nonetheless; at least one struck me as quite irrelevant to the question of Jesus’ historicity; another is mundanely argued but worthy as a testimony to the current conventional wisdom; and one is confused with respect to definitions and coherence. Additional chapters (including chapter 11 discussed here) touch obliquely on the question of historicity. I wonder if these chapters could have been made more relevant by a few touch-ups to the question of methodology. Or did the editors think that a step too far at this stage? (Maybe I’m biased, but methodology — as it relates to the question of the historicity of Jesus — seems to be more often discussed head-on here on this blog than in any other avenue I am aware of.)

But till then, here are some more of the interesting observations of Ingrid Hjelm. Continuing from my earlier post:

Up to this point we have seen Luke following the less royally-oriented David of 2 Samuel and placing his messianic Jesus in the line of the David of 1 Chronicles who is preeminently a founder of the Mosaic cult in Jerusalem. That is, as in 1 Chronicles, Luke’s David is a prophet like Moses and this is the David whose throne Jesus is given.

I attempt here to outline the way Hjelm interprets the David in 1 Chronicles as a Moses redivivus, even as a prophet like Moses, in contrast to his portrayal in 1-2 Samuel, and to review other subtle allusions to the Scriptures Luke weaves into the themes, structure and content of his Gospel.

Since writing the above I’ve read and re-read this chapter many times and have to concede did not fully understand Hjelm’s argument when I began writing.I was looking for continuity of topical theme throughout her discussion of various details and allusions in Luke’s gospel. For me, unfamiliar with the thoughts and dialogues she is engaging with in her articles, too much is left implicit. I felt the chapter was really written for those presumably familiar with her thoughts expressed elsewhere.

Rather than write a full discussion as I had originally intended, I’ll finish this off with just these few points:

In the books of Samuel David is depicted in the earlier stage of his career as an “ideal king” dispensing law and justice — later, when the author of Kings wrote that “no king arose like Hezekiah”, for example, it was because that king was “like David” and adhered to the laws (implied) of Moses.

On the other hand in Chronicles, David is linked to Moses as a founder of the establishment of the cult worship of God in Jerusalem. His genealogy is intertwined with that of Moses and the priesthood and he is declaring the right forms of worship in the Temple in a manner worthy of being “a prophet like Moses”. Like a prophet he is declaring God’s will as did Moses.

While in Samuel, it is Saul and David who are God’s “chosen”, in Chronicles it is David and Solomon. Like Moses’ successor Joshua, Solomon is “perfect” — there is no sin recorded of him and he fulfils God’s plan — while in each case their predecessor was disqualified from accomplishing this (Moses could not enter the Land and David, a man of war, could not enter the Temple). (I believe in each case that the author/s are less black and white than this. After all, Joshua did not conquer all the land, and of Solomon the Chronicler declares that he did take foreign wives.)

This “perfect” Solomon of Chronicles may not be in Luke’s genealogy, but he is upheld as a model for comparison beside Jesus who says he is wiser (greater) than Solomon, and when Solomon’s glory is set alongside that of the perfect creation’s flowers of the field.

As Solomon sat on Yahweh’s throne (1 Chron. 29:23; cf 28:5), Jesus will sit at God’s right hand in heaven and David will recognize their lordship (Lk. 22:69). Though Jesus is greater than the prophets of old, he will nonetheless suffer their fate.

The parable of the Good Samaritan, Hjelm suggests, “might” have been “recognized” by the lawyer to whom it was addressed as a reference to the war between Judah and Israel (the ancestors of the Samaritans) in 2 Chronicles 28. (Hjelm is probably speaking figuratively here when she speaks of the lawyer’s understanding of the parable. The audience of the parable was surely the Gospel’s readers; the lawyer is only a literary character in that story. And this brings us to the questions of the date and provenance of the Gospel before we can decide how its audience might have interpreted it.)

Here’s the significant passage in 2 Chronicles 28:

Ahaz was twenty years old when he began to reign, and he reigned sixteen years in Jerusalem: but he did not that which was right in the sight of the Lord, like David his father:

2 For he walked in the ways of the kings of Israel, and made also molten images for Baalim.

3 Moreover he burnt incense in the valley of the son of Hinnom, and burnt his children in the fire, after the abominations of the heathen whom the Lord had cast out before the children of Israel.

4 He sacrificed also and burnt incense in the high places, and on the hills, and under every green tree. 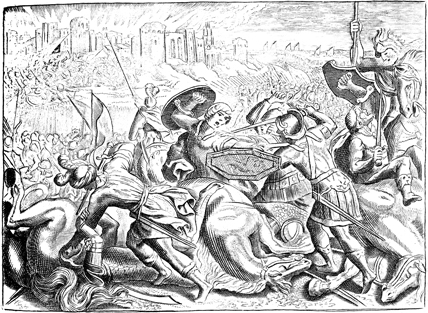 6 For Pekah the son of Remaliah slew in Judah an hundred and twenty thousand in one day, which were all valiant men; because they had forsaken the Lord God of their fathers.

7 And Zichri, a mighty man of Ephraim, slew Maaseiah the king’s son, and Azrikam the governor of the house, and Elkanah that was next to the king.

8 And the children of Israel carried away captive of their brethren two hundred thousand, women, sons, and daughters, and took also away much spoil from them, and brought the spoil to Samaria.

9 But a prophet of the Lord was there, whose name was Oded: and he went out before the host that came to Samaria, and said unto them, Behold, because the Lord God of your fathers was wroth with Judah, he hath delivered them into your hand, and ye have slain them in a rage that reacheth up unto heaven.

10 And now ye purpose to keep under the children of Judah and Jerusalem for bondmen and bondwomen unto you: but are there not with you, even with you, sins against the Lord your God?

11 Now hear me therefore, and deliver the captives again, which ye have taken captive of your brethren: for the fierce wrath of the Lord is upon you.

12 Then certain of the heads of the children of Ephraim, Azariah the son of Johanan, Berechiah the son of Meshillemoth, and Jehizkiah the son of Shallum, and Amasa the son of Hadlai, stood up against them that came from the war,

13 And said unto them, Ye shall not bring in the captives hither: for whereas we have offended against the Lord already, ye intend to add more to our sins and to our trespass: for our trespass is great, and there is fierce wrath against Israel.

14 So the armed men left the captives and the spoil before the princes and all the congregation.

15 And the men which were expressed by name rose up, and took the captives, and with the spoil clothed all that were naked among them, and arrayed them, and shod them, and gave them to eat and to drink, and anointed them, and carried all the feeble of them upon asses, and brought them to Jericho, the city of palm trees, to their brethren: then they returned to Samaria.

It’s an interesting possibility that Luke’s Parable of the Good Samaritan may have been inspired by this passage.

Hjelm refers to the historical situation closer to the time of Jesus when she reminds us of the tensions between the Jews and Samaritans — the Hasmonean destruction of the Samaritan’s centre of worship on Mt Gerizim and the Samaritan retaliation about a century later when they defiled the Jerusalem temple with bones.

Jesus is the Messiah prophesied in Scriptures (Luke 24) to bring Jews, Samaritans and all peoples into a new “Christian Judaism”.

To conclude, with Luke’s implicit use of Old Testament themes and narratives, he exposes an insight into Old Testament ideology, narratives and language that is far more profound and sophisticated than the simple search and mark method employed by Matthew. The key to understanding Luke’s hermeneutics is given in the book’s closure when the risen Jesus identifies himself with the Messiah, who ahs been prophesied by Moses, all the Prophets and the Psalms (Lk. 24:27, 44). Fulfilling the prophecies of old, Jesus’ life and teaching in Luke does not indicate an ending of history, but an introduction to the Christian mission narrated in Acts. Luke’s use of pre-Christian Jewish and Samaritan Scripture not only ‘binds the Scriptures to the Church’, as testimony, witness and heritage, but even more importantly, it is Scripture that offers the paradigms for Luke’s composition.

Luke’s background might, therefore, not be that of a Christianized non-Jew, but rather a Hellenized Jew, well versed in his tradition’s Greek editions.

His method is not that of rabbinic demonstration of utterance and fulfilment, but rather the use of allusion, typology, parallelism and reiteration, so common in ancient writings, that, from a modern perspective, it dissolves the testimonial values and reliability of the Old Testament, the Apocrypha (esp. the Books of Maccabees), Josephus and, as it seems, the Gospels.

However, form and genre do not define historicity per se and our unease with reiteration clashes with the reliability assigned to the use of double witness and reiteration in antiquity. In the biblical world, the continuity and confirmation of past prophecies and events were signs of the fulfilment of a historical plan that had been created long ago. It was the interpreter’s task to see these signs and communicate them. (pp. 215-216)

3 thoughts on “‘Is This Not the Carpenter?’ review (chapter 11 continued)”