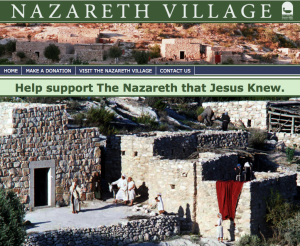 What Tim O’Neill has done in his attacks on René Salm earlier this year over his claims that there was no village of Nazareth at the time of Jesus is defend the very worst practices found among the most culpable of researchers. He is defending the right of academics to make pronouncements of breakthroughs and new discoveries and then say, “Nope, you can’t examine all the details of the data for yourself. I’m a professional! How dare you question my judgements!” And just to be sure you get the point, the same researcher calls upon an “independent” peer to back him up in his assertions of breakthroughs and new discoveries: but nope, we can’t give you all the detail of the data that you’d like. And let no-one mention that both the researcher AND his “independent” peer are committed to stamping out your doubt — that these new discoveries are true. That’s never spoken out loud. Are you some anti-religious bigot to think this might matter?

First, the background. 2007 saw the publication of “Surveys and Excavations at the Nazareth Village Farm (1997–2002): Final Report” (the Nazareth Village Farm report) in the Bulletin of the Anglo-Israel Archaeological Society (BAIAS). The following year, the same peer-reviewed journal published René Salm’s criticism of that report (“Response”), along with a defence of it by two of the report’s authors (“A Reply to Salm”), another defence by the director of a related project, Ken Dark (“Nazareth Village Farm: A Reply to Salm”), and finally a 23 page “Amendment” by Y. Rapuano correcting some of the deficiencies Salm had pointed out in the original report. The same 2008 issue of BAIAS also contained a scathing review by Dark on Salm’s book, The Myth of Nazareth. Salm responded to that review on his website (http://www.nazarethmyth.info/bibl.html).

René Salm’s book, The Myth of Nazareth: The Invented Town of Jesus, surveys earlier reports that have been produced on the archaeology of Nazareth. Salm itemizes the history of archaeological finds at Nazareth and compares these with claims that go beyond that evidence by researchers who have a demonstrable religious bias.

A pattern is developing among archaeologists of applying Judean datings to Galilean artifacts. Both Rapuano and Dark do this at critical junctures. Using southern typologies moves the terminus post quem back generations or even centuries. It took over two centuries for the kokh tomb to get from Judea to Galilee! (Salm, drawing on the scholarship of Kuhnen 254-55)

That leads to one little detail that Tim O’Neill happens to overlook in his attack on Salm. The Nazareth Village Farm report was the work of three persons. Only one of them, Rapuano, is a trained archaeologist who, however, customarily works in Judea far to the south. It is Rapuano who dated the pottery at the NVF and who, Salm shows, wrongly uses early Judean parallels (e.g. from Jericho and Gezer) to date the Galilean pottery at Nazareth, thus producing false early datings. Another of the NVF report authors has extensive field experience but is untrained, and all three are or have been closely connected with the religious institutions dedicated to discovering and restoring — for public “educational” purposes — the town of Jesus. The religious bias of the funding body and persons behind the report should not be overlooked. The Nazareth Village Farm report begins by acknowledging the religious and tourist motivation of its authors:

For nearly two decades, the University of the Holy Land (UHL) and its subsidiary, the Center for the Study of Early Christianity (CSEC), has laboured to lay the academic foundation for the construction of a ﬁrst-century Galilean village or town based upon archaeology and early Jewish and Christian sources. It was hoped that such a ‘model village’ would provide a ‘time capsule’ into which the contemporary visitor might step to encounter more eﬀectively the rural setting of Galilean Judaism and the birth-place of early Christianity. At Nazareth Village this educational vision is currently being realized (for a popular publication on the Nazareth Village Farm project, see Kauﬀmann 2005).

Understand exactly what the University of the Holy Land (UHL) and the Center for the Study of Early Christianity (CSEC) are: See

It is not an insignificant detail that all those involved in the archaeological dig at the Nazareth farm, the authors of the report, and the institutions they represent, are dedicated to discovering (and restoring a replica of) the Nazareth of the Gospels as a religious enterprise. The archaeologist at the centre of Salm’s criticisms is Jehudah Rapuano. One can glean an insight into his religious interest in the Nazareth site from online scribblings from years back, from his choice to do his Masters degree at the University of the Holy Land, his association with Zion Public Radio (“Israel Talks, We Listen”), and his belief that there is even literary evidence that Nazareth was a settled village in the time of Jesus (presumably the Gospels are his authority) (see his and Pfann’s reply to Salm in the BAIAS).

And this is the trained archaeologist the Israel Antiquities Authority licenses to undertake a dig at Nazareth — a dig which the report itself said had a religious and tourist motivation. And this is the author whom Tim O’Neill says we are lunatics not to trust when he pronounces his views on the evidence for Nazareth.

This post goes through O’Neill’s key criticisms and concludes with a demonstration that he has put himself squarely in the anti-intellectual, we-must-always-defer-to-the-authoritative-pronouncements-of-scholars-and-never-be-so-impertinent-as-to-question-them corner of the fight.

One theologian (another who regularly calls upon the less learned to lay aside their questions and simply defer to the judgments of scholars) has said he finds Tim O’Neill’s personal denigration of René Salm and criticism of his supposed arguments about Nazareth “very helpful”. Tim O’Neill himself expresses satisfaction with his post:

I put this together in a thread on the James Randi forum where some Mythers tried the “Nazareth never existed” tack. After this post, they totally abandoned that line of argument.

Tim O’Neill does have that affect on some people attempting to engage in a serious intellectual discussion. Anyone interested in discussing the facts and reasons in a civil manner and avoiding ad hominem soon learns to ignore his blustering online persona. His language and tone are further evidence of his anti-intellectualism and bullying demands to have others submit to his own arguments (or he’ll call you bad names).

(Tim O’Neill is always welcome to reply to this or any other post on this blog, by the way, but only if he abides by the blog’s comment policy and moderation rules. But of course, if he does that, he will lose the force of his primary weapons: bluster and insult. I think he’d lose interest.)

O’Neill has the ability and patience to dig out many sources but few of his readers would have the like patience or opportunity to actually test his claims by checking those sources for themselves. Some of those readers may find this post “very helpful”.

Falling over at the start