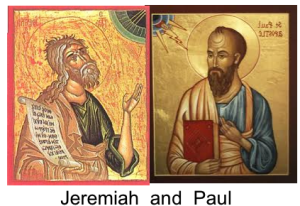 M. Weinfeld can argue for OT books from Joshua to 2 Kings were produced by a Deuteronomic school, K. Stendhal can argue that the Gospel of Matthew was produced by a school “of St Matthew”, (and I’ll be posting again on reasons to believe “Luke” was part of “a school”), ditto for the Johannine writings, and Philip Davies can argue that the prophetic books of the Old Testament (Isaiah, Micah, and the rest) were produced by scribal schools who wrote in dialogue with one another, so why can we not imagine the possibility that the letters of Paul, all of them, were also produced by a school (or schools) rather than a single individual, whether that individual was attributed the name of Paul in honesty or duplicity.

It’s just a thought-experiment. I am willing to take it up because I think that the argument that Paul really wrote certain letters because they reflect a certain personality and loose way of thinking are naive and circular. Not that I reject the historicity of Paul. I don’t. But I don’t “believe” in his historicity, either. I simply don’t know. I find a lot of merit in Roger Parvus’s argument that the name Paul was attributed to hide the identity of an earlier first century author of several of the letters. I can acknowledge Earl Doherty’s argument against the letters being composed in the second century by Marcionites. Then again, Bruno Bauer who disputed the historicity of Paul was no dim-wit, either. Moreover, I am always conscious of Patricia Rosenmeyer’s study of ancient letter writing that demonstrated that the most realistic touches in letters are not necessarily signs of authenticity. And many if not most scholars, it seems, are quite willing to admit that at least some of the letters written in Paul’s name belong to a Pauline school of some sort. So I’m open to the question of the provenance of the letters attributed to Paul.

But probably every commentator on Paul’s letter to the Galatians I have read has gone along with the assumption that that letter’s expressions of frustration, anger, hostility are sure signs of a personal author’s personality quaking through the pages. Clearly none of them read Rosenmeyer, but let’s leave her work on epistolary fictions aside for now. Let’s look instead at an observation Thomas Brodie has made in Birthing of the New Testament.

That’s the kind of man Paul was

Colin Powell, former US Secretary of State, once said he liked to rattle people’s cages, because seeing someone rattled helps you meet the real person. So when Paul suddenly becomes angry in Galatians and calls the people stupid (literally, ‘mind-less’, without nous, a-noetas, Gal. 3:1) you feel this is the real thing. And when he repeats it a little later the effect is even stronger: ‘Are you so stupid?’ (Gal. 3.3). OK, so that’s the kind Paul was. (p. 141, Beyond the Quest)

That’s the verdict of most of us who have read Galatians. But Brodie then introduces a challenge.

He suggests that if we look more closely at Galatians, and then cast our minds back over what we have read in the Old Testament books, in particular Jeremiah, and take a fresh look at that book — in particular in the Septuagint or Greek version, we will see something very similar. Jeremiah also calls the people mindless, then repeats the accusation for intensified effect (Jer. 5.21, 23).

Of course there are huge differences between the texts. In the Old Testament the mindlessness is a failure to respond to nature — first to the sea, and then to the rain (Jer. 5.22, 24). In Galatians the mindlessness concerns a failure to respond to the new message — first to Jesus Christ crucified, and then to the one who gives the Spirit (Gal. 3.1, 4). And so on: the elements of the older text are reflected in the new, but in forms that are variously distilled, updated, and adjusted to the context of the later writing.

The overall relationship between the full texts (Jer. 5.21-25; Gal. 3:1-5) is complex and precise. Galatians is not raw emotion. It contains a rehearsed literary adaptation of ancient Jeremiah. (p. 141, Quest)

Here is Brodie’s layout of how Jeremiah and Galatians might be compared. To begin with, it appears Jeremiah’s call and authority has been imitated for Paul in Galatians:

Even at his most passionate, he seems to be engaged with the text of Jeremiah (see Table 96). (p. 590, Birthing of the New Testament)

According to Brodie “Paul” recasts Jeremiah 5 into another well-known literary form, the diatribe. This was a standardized form of alternating sarcasm and questions (Martyn, Betz).

He also recasts Jeremiah’s appeal to nature into an appeal to Christ.

Otherwise — without going into detail — the texts share either similarity or complementarity:

The account of Paul’s confrontation with Peter (Gal. 2.11-14) is a further example of an apparently spontaneous text which turns out to be ‘saturated with scriptural echoes, allusions and concepts’, and an analysis of the surrounding text — all of Galatians 1-2 — shows a pervasive presence of Scripture (Ciampa 1998: especially 157-78, 296).

Unfortunately the relevant pages of Ciampa are not available online and at $127.50 plus postage I’m not in a huge rush to buy a copy. So this is probably a good place to leave the thoughts of Brodie on this one snippet of the Bible and allow interested readers to think it through for themselves.

6 thoughts on “Sowing Doubt That an Emotional Paul Authored Galatians”