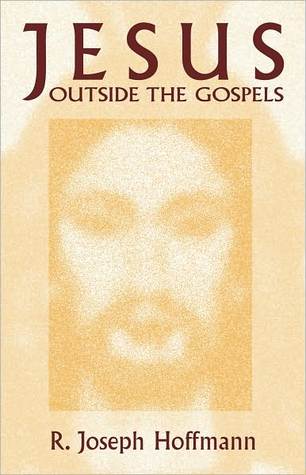 Jesus Outside the Gospels is a small volume compiled by R. Joseph Hoffmann and published 1984. He argued that various sayings of Jesus found across a variety of sources (not only canonical ones) “put it beyond doubt that the church was capable of generating sayings to suit new situations, and did not hesitate to invent new “words” of the Lord”.

“Sayings” of Jesus—which might better be termed traditions about the sayings of Jesus—are not confined to the Gospels canonized in the New Testament- There exist scores of sayings (logia) for which there are no parallels, or only distant ones, in the Gospels. Collectively, these go by the misleading name agrapha—unrecorded words. As this title prejudices their analysis (the Gospels do not present a verbatim record of Jesus’ words), it is best to designate them “extracanonical” sayings or sayings-traditions. The significance of these sayings, it should be emphasized, is not that they present a more reliable picture of Jesus than the one given in the Synoptic Gospels. Rather, they put it beyond doubt that the church was capable of generating sayings to suit new situations, and did not hesitate to invent new “words” of the Lord in furthering their missionary work. The questions of proselytes and the accusations of enemies of the sect were the most prominent but by no means the only situations addressed by these sayings. (JOTG, p. 69)

Hoffmann was not saying that no sayings went back to Jesus himself, but that it was clear that any such sayings were adapted (revised, mutated) according to the needs of the church. This has long been a widely held view among scholars. It is also clear, though, that many sayings were invented and attributed to Jesus himself to give them added weight of authority. Earl Doherty argues that even the Q sayings evolved in a way that they were attributed to Jesus relatively late in their life-cycle.

I think some readers would be interested in seeing a list of some of these extra sayings attributed to Jesus by the early church writers, and the samples following are taken from Hoffmann’s book. I am including here only those sayings found among the “proto-orthodox” Church Fathers and omit those found in Gnostic and other literature.

He begins with sayings of Jesus that appear in Paul’s letters.

The earliest of all Christian writings come from Paul, who was not himself a follower of Jesus during the latter’s lifetime. Moreover, as we have noted, Paul was not especially interested in the “historicity” of Jesus, preferring instead the divine-man christology that he had learned from his dabbling in Greek philosophy. Hence, it is to be expected that in Paul’s genuine letters we find almost no reference to the life and teaching of Jesus, and very few sayings. This comparative indifference to history in the earliest phase of the development of the new sect stands in conflict with the fact that sayings attributed to Jesus multiply over the course of time—a difficulty that is not resolved by the familiar argument that Paul, as not being an eyewitness to the ministry of Jesus, would not have known many of his sayings. The very fact that the earliest Christian literature lacks such sayings serves to indicate that in Paul’s day the teaching of Jesus was not considered as important as beliefs about him, beliefs that had the effect of altering and eroding historical data. (JOTG, p. 69-70, my emphasis)

My own view is that since the earliest evidence points to more interest in beliefs about Jesus than in his sayings and deeds, it is a more likely scenario that the Jesus traditions grew out of being of faith than a contemporary historical life. But that’s another question. Here are the sayings of Jesus that come to us through Paul or attribution to Paul.

The new tradition which I handed on to you came to me from the Lord himself: that the Lord Jesus, on the night of his arrest, took bread, and after giving thanks to God, broke it and said, “This is my body, which is * for you; do this as a memorial of me.” In the same way, he took the cup after supper and said, “This cup is the new covenant sealed in my blood. Whenever you drink it, do this as a memorial of me.” [1 Cor. 11:23-25]

Scattered throughout the works of early Christian writers from Justin Martyr (fl. 160 AD) onward are a number of sayings attributed to Jesus that have no parallels in the canonical gospels. Some, for example those preserved by the theologian Origen, suggest that Jesus was preoccupied with the signs and material blessings surrounding the millennium; others, especially those related by Clement of Alexandria, imply that Jesus was thoroughly antimaterialistic and was only concerned to teach the truth about his relation to God, as he does for example in the Fourth Gospel and the gnostic Gospel of Thomas (pp. 74—86). The process of selection and preservation of these logia is a reflection of the theological concerns of individual writers working in particular historical settings—or put another way, Jesus is given to say those things individual writers find it convenient for him to say. (JOTG, p. 70-71, my emphasis)

I have rearranged the order in which these samples appear in Hoffmann’s book to roughly group them chronologically and by source. I am sure there must a website with similar, even a more comprehensive, list.

2 thoughts on “Sayings Manufactured For Jesus”