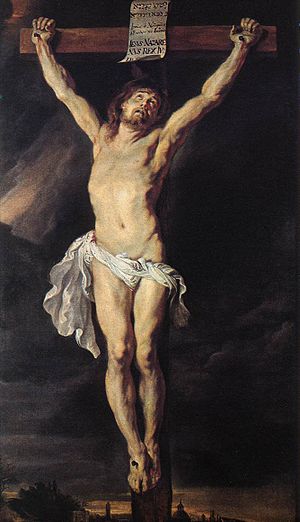 Continuing the series of Couchoud’s The Crucified Christ — archived here. In this chapter Couchoud attempts first of all to account for the origin of the concept of Christ crucified and then to address what this meant for Paul and his churches, in particular its mystical and timeless character.

The greatest gift of Paul to Christianity was the Cross. Christians had been accustomed to interpret the prophecy of Isaiah that Jesus Christ had died for our sins. The usual notion — you might call it the orthodox interpretation — was suggested by the word Lamb in Isa. liii. The earthly temple had its counterpart in Heaven, and the Paschal Lamb has its celestial image in Jesus Christ. He was led to the slaughter in sacrifice, and his blood washes their sins from them who are bathed in it. Such is the picture drawn by John, the authorized prophet of the mother-church of Jerusalem. The Jew would understand how the sacrificial death of the Lord would wash away his sins. This idea would give new significance to baptism and to the Easter, which thus became interassociated and symbolic of the sacrifice of the Heavenly Lamb. In the general wreck of Jewish rites this preserved the Easter (Paschal) Feast among Christians. (p. 67)

Couchoud writes that Paul accepted this interpretation overall. In 1 Corinthians 5:7 he reminds Christians at the approach of Easter that “Christ our passover is sacrificed for us.” Like John, he wrote that the shedding of blood brings redemption. Jesus Christ, he said, was a “ritual victim” or “propitiation”  — Romans 3:25.

But meditation on the sacred texts led him to enunciate a new interpretation of unheard-of boldness.

Two years ago I posted “They pierced my hands and my feet”: Psalm 22 as a non-prophecy of the crucifixion. If the argument there is watertight then the first part of Couchoud’s view of what inspired Paul to imagine the crucified Christ falls apart. But see also the wikipedia article They have pierced my hands and my feet. I would need to revise that earlier article to see whether it is premised on the Septuagint being a translation of an earlier Hebrew text. If the Jewish scriptures were, as some scholars have argued (e.g. Thompson, Lemche, Wajdenbaum, Wesselius) Hellenistic products, then is it not reasonable to posit the Septuagint as the original version — the legendary letter of Aristeas notwithstanding? I have had other thoughts on a plausible catalyst for the concept but I’ll save those till the end. Will let Couchoud hold the floor for now.

Only the first part would break down if the contents of the linked post hold. There are two parts to Couchoud’s view on what inspired the concept of the crucified God; the second half of the post is about the nature of this belief — its mystical character and its non-temporality (non-historicity).

The Origin of the Concept (Couchoud)

Psalm 22 depicts the bitter suffering of a god-fearing believer. Couchoud suggests these verses might be read as a companion to Isaiah’s depiction of the expiatory slaying of the Servant – especially since it is followed by Psalm 24 presenting the triumph of the King of Glory.

Here is the Septuagint of the Psalm in translation: END_OF_DOCUMENT_TOKEN_TO_BE_REPLACED