Five different ways if you count the Gospel of Peter but few of us know much about that Gospel so I’ll restrict myself to what we find in those burning candles of spiritual wisdom drawn out from the dark Orient by the iron tongs of Rome — the four canonical gospels of Matthew, Mark. Luke and John.

Let me be perverse and open not with the first but with the second of these. I’ll conclude with the third but not omit the fourth.

In the Gospel of Mark two Marys and a Salome come to the tomb at sunrise and find the stone rolled away and a young man, quite alive and fully clothed in nice white, sitting inside. He tells the women that Jesus is not there but he has gone north to Galilee and there the disciples can see him again. But the women run away scared witless and say nothing to anyone. (The remainder of Mark — the verses following 16:8 — are a later editorial addition on the part of someone who attempted to combine the endings of Luke and Matthew. But that’s another story, easily documented, so just trust me for the moment on that one.)

Now this account is quite coherent and makes perfect sense on its own. Just like any respectable story in which the hero departs this earth to join the heavenlies he leaves behind — as proof of this fact — nothing. The mere fact that his body is no longer there where it ought to be is proof positive in ancient literature (e.g. Hercules, Romulus) that he has been taken up to the celestial habitations with the gods.

But this young man (not an angel by the way — Mark is perfectly capable of using the word for angel when he wants to, and he doesn’t use it here) in the tomb reminds first-time readers immediately of the last young man they encountered in this gospel — the one who was with Jesus at the time of his arrest in Gethsemane and who fled with the other disciples but whose clothing was snatched by his pursuers so that he ran off starkers. Someone once painted a picture to make it easier to grasp the concept: 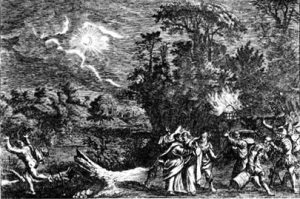 There was another moment earlier in this same gospel when a man was found “in his right mind” and fully “clothed” at last and “sitting” among “tombs” and that was the poor fellow who had, before he met Jesus, been stuffed with enough demons to drown 2000 pigs (Mark 5) and who went by the collective name of Legion.

Cast back even earlier to the baptism of John that is associated not with pure white linen but rough camel hair garments.

The Gospel of Mark concludes, it may be fair to suggest, on a pointer to its readers’ baptismal experience or expectation. Do see /2011/10/02/that-mysterious-young-man-in-the-gospel-of-mark/ where I have discussed this in more detail.

Further, the women who are commanded at the end to speak out about Jesus remain fearfully silent. Contrast those moments earlier in the opening scenes of the Gospel where Jesus commanded silence yet was disobeyed by those he so ordered who went out and spoke (Mark 1’s leper, for example).

Mark’s Gospel is concluding with an ironical twist to the motifs it had introduced earlier. The young man who fled naked was, by this act, buried symbolically with Christ, and was thus “resurrected” in the baptismal garments at the end, “with Christ”. This is the perfect spiritual inclusio (bookend) closing to a gospel that began with a prophet in rough garments declaring the advent of a saviour king.

The women are part of the earthly following of Jesus who, like the rest — e.g. twelve disciples — simply never come to understand Jesus. The message is for the readers to learn from the lesson of their failure.

The young man had directed everyone back to Galilee which is, in contrast to the Jerusalem scene, a symbol of the Kingdom of God. But I am short-circuiting a number of scholarly studies that have arrived at this conclusion.

The author of this gospel had read the Gospel of Mark (he quoted most of it verbatim) and did not like this ending. He omitted Salome for a start since he had no idea who she was or why Mark included her. He kept Mary Magdalene as a favourite and Mary his mother, of course.

But the primary interest of Matthew was to write something believable as historical reality — at least for anyone who was convinced that Old Testament prophecies could be deployed as proofs that something had happened. (Isaiah said it, I believe it, sort of thing.)

Matthew excised from Mark anything that remotely smacked of parable or symbol. Jairus, the name meaning “awakened”, was deleted from Mark’s tale about the resurrection from the dead (said to be a mere sleep in Mark) of he daughter of the one who bore the name meaning “awakened” (Jairus). I have posted several other examples on this blog of Matthew’s predilection for removing symbolism from Mark and replacing it with “nature”, or “history” or “dramatic reality”.

So Matthew took one look at Mark’s resurrection scene and said, No Way! That clearly yet mysteriously symbolic young man has to go! An angel will take his place. And just to be sure my readers get the point and know we are talking fact here I’ll bring in the story of the guards at the tomb. Then I’ll bring in the way they were bribed to lie about what they had witnessed. That will convince the true believers or anyone else who wants to join our club. Yes!

The author of this gospel may have disagreed violently with the author of Mark but nonetheless they were both of the same symbolic mind. John loved symbolism and drenched his gospel in it.

So when Mary Magdalene comes to the tomb while it is yet “dark” we know that Mary is still in a state of ignorance. This is what the author wants us to understand. But the author of this gospel was also aware of other gospels competing in his arena and (I have Crossan, Riley and others to thank for this insight) he was not all that favourably disposed towards those who broadcast resurrection scenes cementing the honour and authority of the likes of Peter Thomas and Mary. So he took care of each of these by having them all either approach the tomb or witness the resurrected Jesus, one by one, but all only to be outdone by “the one Jesus loved” who was the first to believe without ever seeing!

This was John’s message. Thomas, Mary and Peter all had their place, but, ho-hum, they simply did not compare with that of the beloved disciple. Was this John or “the true believer” or another? The definitive answer has long since been lost.

John’s gospel made sure that any claim a Mary might have had to being the first witness to the resurrection was scotched: Mary simply didn’t believe — she was sure Jesus was a mere gardener.

He made short shrift of Thomas (another who had his own gospel, too) as well. He didn’t believe till he actually (grossly) touched the body of Jesus.

And Peter couldn’t believe for seeing. Only the “beloved disciple” had it all right — belief from the first and that without seeing.

Now we come to the Gospel I personally think was not written (or at least finalized and substantially redacted) until well into the second century, possibly even mid or latter half of the second century. This was the catholicizing gospel. As its own prologue observes, many others had gone before.

If this posterior dating is correct (and I have many more reasons for thinking so than I have alluded to above — mainstream dating is by comparison little more than an ideological cluster of mantras) then we can clearly see why Luke re-wrote the resurrection details as he did.

Let’s pretend he was the last of the evangelists (gospel-authors). By now he has so many differently named women visiting the tomb that he simply cannot get a handle on them so, as any man with the problem of a surplus of women does, as an afterthought he nonchalantly drops that line, “there were other women there too” (Luke 24:10). Now everyone is covered.

But Luke is into recreating an idyllic patriarchal scene as if Jesus should appear straight out of the pages of the holy patriarchal histories in Genesis or Ruth or Judges. As I have posted previously, his scene of the two disciples on Emmaus road is taken directly from the Genesis episodes of Jacob fleeing. And before then, his miraculous birth narratives are cut right out from the pages of the births of Samuel and Isaac. Luke loves those settings with visiting angels and momentarily blinded mortals, etc.

So as with the tales of divine messengers in Genesis Luke makes sure there are two angels together bringing the news from God that mortals (e.g. Abraham, Lot) need to hear. To accommodate that Johannine gospel he makes sure Peter gets a running start to have a look-see into the tomb. And since this is, after all, the “catholicizing” gospel that is laying the foundations of a Petrine authority for the church (c.f. Acts where even Paul is subject to Peter and his circle) Luke makes it clear that the resurrected Jesus appeared first to Peter.

Thus endeth the earlier tales of appearances to Mary and company.

So, in a nutshell, here it is:

Gospel of Matthew: a true tale of angels and frightened guards for the true believers

Gospel of John: symbolism of the night again, and the need to trounce the rival gospels of Peter and Mary and Thomas.

Gospel of Luke: catholicizing venture germinating with a primacy for Peter

Okay, I know, my title was wrong. I should have said” Why Christ’s resurrection from the dead was witnessed in four different ways!” Next time.