Continuing from my previous post, this time I’m outlining Spong’s overview of the distinctive way the Gospel of Luke portrays Jesus.

Bishop John Shelby Spong himself is renowned for his views on inclusiveness — that the Church should not discriminate against anyone for any role because of their gender or sexuality. In the Gospel of Matthew he sees a narrative expressing God’s will that “the whole world” will eventually be united in a new Israel that will transform both Jews and gentiles. In the Gospel of Luke he sees the same theme expressed differently. Instead of Jesus being a new and greater Moses as the Lawgiver who was building a new Israel on what he saw as the spiritual heart of Jewish Law, Jesus in Luke’s Gospel is:

I focus first on Luke’s construction of Jesus as an emulation of Elijah.

Matthew and Mark both describe John the Baptist as the Elijah to come to announce the advent of Jesus Christ. Both Gospels even dress him up like Elijah with a hairy garment as did Elijah. This treatment of John the Baptist does not suit Luke’s purpose for his gospel — Luke wants to present Jesus as the new Elijah instead — so he changes what had been written earlier. He omits this line that Matthew and Mark used to visually identify John the Baptist with Elijah:

And the same John had his raiment of camel’s hair, and a leathern girdle about his loins; and his meat was locusts and wild honey.

For Luke, John was not Elijah to come, but one who came “in the spirit and power of Elijah”:

And he shall go before him in the spirit and power of Elias (Luke 1:17)

The reason for this subtle shift in the tradition becomes clear as Luke’s story unfolds, for Luke wanted to see and to portray Jesus as the new and greater Elijah. (p. 179)

Elijah makes his appearance in Luke’s gospel at the transfiguration of Jesus, the moment when both Moses and Elijah appeared with the glorified Christ on the mountain. In Jewish tradition Moses symbolized the Law and Elijah the Prophets.

So Luke chose Elijah upon whom to pattern his portrait of Jesus for the gentiles. From the transfiguration onward the Elijah theme rose in Luke’s story until it reached a crescendo in the climax of his Gospel. (p.179)

After the Transfiguration, Jesus challenged by the original Elijah

So Elijah does not make his appearance in Luke’s Gospel until the moment of the Transfiguration of Jesus. It is from that moment on that Jesus is said to have announced that he must go to Jerusalem to be crucified and rise again. His disciples, however, do not understand what he means by this. Nonetheless, Jesus sets out for Jerusalem with them.

On their way they must pass through the region of Samaria. This is the setting of the Old Testament’s northern kingdom of Israel where Elijah was once active. It was in this area that Elijah had challenged the prophets of Baal to a contest to see whose god could bring fire down from heaven. Elijah won, and took advantage of his victory by ordering the binding of all 450 of the Baal prophets prior to his taking a sword or dagger, presumably, and murdering them one by one (1 Kings 18). 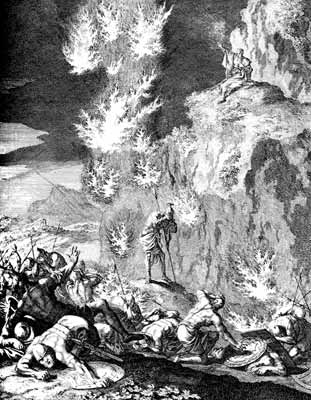 But this time the captain of this 50 approached Elijah in supine deference begging for mercy from Elijah. This is always a “good attitude” among the pious.

So Luke has Jesus travel through the same area on his way to Jerusalem. The locals, the Samaritans, fail to show him the expected hospitality. So two of Jesus’ followers, James and John, ask Jesus if they should call down fire from heaven upon these inhospitable characters, just “like Elijah did” (Luke 9).

For their insight they received only the rebuke of Jesus. The new and greater Elijah would not use Elijah’s fire power to destroy but to expand, to open, to refine, and to save. The disciples did not understand, and so Luke’s story moved on.

Ascension and Pentecost Trump the Resurrection

Spong believes this is explained by Luke’s interest in portraying Jesus as a new and greater Elijah:

[O]nly Luke gave us a narrative of the ascension and only Luke gave us a narrative of the day of Pentecost. . . . Only Luke separated the events of Easter, ascension, and Pentecost into three separate narratives. Why he did that has been a perennial question in New Testament scholarship. The answer is found, I am convinced, in the figure of Elijah and in Luke’s desire to present Jesus in terms of the Elijah portrait. (pp. 180-1)

Luke Knew He Was Not Writing Literal History

Before reminding readers of the story of Elijah in order to explain how Luke used this to construct his Jesus, Spong drops in an observation that must make many Christians uncomfortable.

It would be refreshing to realize that Luke never intended that story [of the ascension of Jesus in the clouds to heaven] to be literalized in the first place. Even Luke knew he was writing in a symbolic way. He was, in fact, retelling the story of Elijah as the vehicle through which to lead his gentile audience to see a Jewish Jesus who had become the universal Christ. (p. 181, my emphasis)

This is a point that I do believe not a few scholars would say of not only Luke but Mark, John and Matthew, too. They may share it with their more liberal Christian brethren, but it is not something generally pushed into the ears of the conservative majority. It is refreshing to see Bishop John Shelby Spong tell it like it is.

So what is the symbolic tale that Luke was telling? This follows.

So what does this have to do with Jesus and Luke’s way of depicting this Jesus? (The following are Spong’s words with my formatting.)

Jesus was greater than Elijah. That was Luke’s constant message. (p. 182)

Jesus’ disciples witnessed the ascension of Jesus (Acts 1:10) as Elisha kept his eyes on the departing of Elijah.

Spong writes that the disciple’s “reward for seeing the exaltation of the hero” was their subsequent receiving of the Holy Spirit. (I am not sure this is a justifiable way of expressing it, but I need time to consider alternatives.)

Spong explains that Elijah’s spirit was “a human spirit”. So after Jesus’ ascension to heaven, to prove he was greater than Elijah, the infinite Holy Spirit of God himself falls down from heaven to fill the disciples.

And this Holy Spirit fell not just on one loyal disciple, but on the whole assembly of the disciples!

I would like here to suggest that Luke may more likely be thinking back to the Old Testament narratives of divine fire not consuming what it rested upon, such as the “burning bush” that Moses saw. But I think Spong is more enthusiastic about seeing Luke looking forward to more inclusive values of western countries 2000 years later than his own time than I am.

But either way, the book of the Acts of the Apostles shows the disciples performing the same sorts of miracles (even greater ones) than Jesus had performed. The disciples could not only heal the sick and crippled and raise the dead, but their mere shadow could cure.

Other symbolic features of Luke’s Gospel

(And more. But those are the points that I view to carry the most weight on Spong’s behalf.)

Jesus, the fulfilment of Judaism, but for the Gentiles

Before Luke could make clear to the Roman officials his universal claim for the Christian religion, he had to present Jesus as the fulfillment of Judaism. This meant that, like all the Evangelists, he had to draw deeply on the Jewish heritage. Matthew had done that well in his attempt to address a Jewish world. Luke must do it equally well in his attempt to address his gentile audience. Matthew had leaned particularly on the figure of Moses, who was the dominant personality in the Jewish religion. He had presented Jesus as the new and greater Moses. As the giver of the Law, Moses stood at the apex of that inward-looking tradition of Judaism. The law defined internally the life of teh Jewish people. Moses was a figure in Luke’s background also but not as the lawgiver so much as he was the one who led Israel from bondage to freedom, from Egypt to teh promised land. When Luke wrote the journey segment of his Gospel (Luke 9:51-18:14) that would carry Jesus and the disciples from Galilee to Jerusalem, the figure of Moses could be discerned in the background as Jesus led his followers from the bondage of sin into the Kingdom of God. (p. 177)

The Suffering Servant of Isaiah

Another Hebrew image applied to Jesus was the “suffering servant” figure of Isaiah. Conventional scholarship tends to see the last half of Isaiah as the product of a different author from the first half. The latter half is supposedly written by way of contrast with the first to speak of a servant whose power (city, temple, armies, wealth) has been broken. Other scholars, such as Thomas L. Thompson, take an opposing view and think Isaiah is a unity after all, and that the latter half explains the first — by way of irony. Israel’s mission is to suffer and serve.

Spong, however, sees Jesus as the one coming to the synagogue in Capernaum to preach liberty to the captives, and sight to the blind, to cleanse the Temple, to reveal his identity to wanderers along the Emmaus road.

6 thoughts on “Jesus the New Elijah, and the Gospel Being a Symbolic Tale According to a Scholarly View”