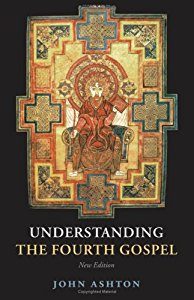 One of the more absorbing books I caught up with about a year ago is Understanding the Fourth Gospel (2nd ed) by John Ashton. (I had read somewhere that this is the book to read for anyone wanting to understand what could be understood about this gospel. It obviously had something of interest for me — since writing this post I noticed I have written on snippets of this book several times before, now collated here.)

Of many insights I would like to revisit and share, here’s one I opened up again just now. It shows how this gospel, unlike other Jewish literature and, say, Matthew’s gospel, declares itself (through its Jesus) as the foundation of a new religion. Nothing new really in the big scheme of things here, but it does give another glimpse into the mind and context of the author of this gospel.

The life of Moses furnishes an ample reservoir of legends from which Jewish writers of all persuasions could draw when searching for fresh models, symbols or arguments to encourage and inspire their own contemporaries.

Thus Deuteronomy gives a new twist to some of the earlier episodes involving Moses in Exodus and Numbers.

Since the Exodus story is, among other things, a foundation myth, the frequency with which other writers turn to it should not surprise us. What may cause surprise is the number of guises in which Moses appears . . . .

But Moses was not the only inspirational option available to writers.

Books were also written in the names of Enoch, Baruch, Ezra.

The key thing to note about all of the above:

Yet although they were proposing new revelations they were not repudiating the old.

Where the Gospel of John is different:

Where the fourth evangelist differs from all of these, as well as from those who exploited the Moses tradition, is in his conscious substitution of this tradition by the story of Jesus: ‘You search the scriptures,’ Jesus tells ‘the Jews’, ‘and I am the one to which they bear witness’ (5:39). The deliberate replacement of one founder-figure by another (the same step would be taken centuries later by Mohammed) is effectively the proclamation of a new religion. We may compare John with Matthew here, for whom Jesus is a second Moses, refining and purifying the law, but not replacing it (5:17). John, by contrast, puts the law aside, offering instead, in the name of Jesus Christ, ‘grace and truth’ (1:17). Similarly the Temple, the second pillar of contemporary Judaism, was for Matthew a place where Jesus’ disciples continued to offer their gifts: whereas in John the locus of Christian worship has shifted to a place of ‘spirit and truth’ (4:23) [p. 448]