In an earlier post outlining notes from Tyson’s Marcion and Luke-Acts: A Defining Struggle I mentioned Tyson’s reference to Andrew Gregory’s conclusion that Ignatius did not make use of The Gospel of Luke:

The passage in Smyrnaeans 3:2 has striking resemblances to Luke 24:39. See the table on Glenn Davis’s site.

Tyson refers here to Andrew Gregory, The Reception of Luke and Acts in the Period before Irenaeus: Looking for Luke in the Second Century, WUNT 2:169 (Tübingen: Mohr Siebeck, 2003). I have not yet seen this work so can only quote Tyson:

After calling attention to similarities between the two texts in terms of setting and language, Gregory finally agrees with William R. Schoedel in rejecting the view that Ignatius knew and used the Gospel of Luke. (p.82)

I have since caught up with the details of Andrew Gregory’s discussion in The Reception of Luke and Acts in the Period before Irenaeus: Looking for Luke in the Second Century, 2003:

The bare gist of the following Greek text can be found via referring to the link to Davis’s table above. 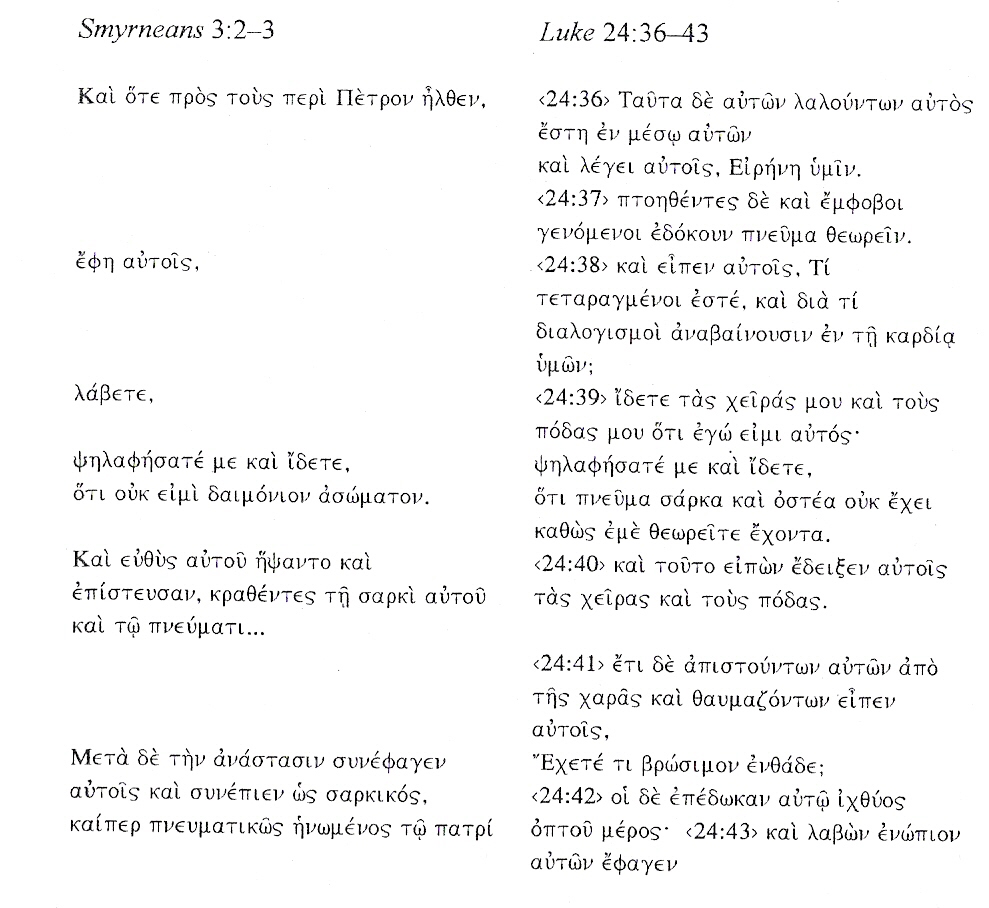 Gregory writes that J. B. Lightfoot observed: “the reference is plainly to the same incident which is related in Luke xxiv. 36 sq. . . The words, however, in which it is told, are different.” (p.71)

Gregory comments: “Lightfoot highlights a crucial methodological problem . . .” The similarities between the letter of Ignatius and the Gospel of Luke are sufficient to suggest that Ignatius either drew on the Gospel of Luke from memory or that he changed Luke’s wording for his own doctrinal (anti-docetic) message.

But there is another possible explanation that Gregory raises: Given the “striking differences between the expressions put on the lips of Jesus to describe his bodily condition”, these differences “are best understood as similar but independent sayings.” (p.72)

Our Gospel of Luke, based on the Alexandrian text (P75), has Jesus speak of his “spirit/pneuma” body not having “flesh/sarx“. If Ignatius knew this text, why would he change those words to the phrase: “daimonion a-somaton / bodiless daemon/spirit”?

Was ‘bodiless daemon’ in an ‘earlier Luke‘?

The Codex Bezae, in both its Latin and Greek variants of Luke 24:39, contains the ‘bodiless daemon’ used by Ignatius, indicating this was the earliest expression used. However, Origen and Jerome accused this reading of being found in the “heretical” Gospels. Was this because they were familiar only with the later Alexandrian text which used “fleshless spirit”?

But the Greek and Latin Codex Bezae variant of Luke 24 also uses “phantasma” or “ghost” in Luke 24:37 (“they thought they had seen a ghost”) in place of the Alexandrian “pneuma” or “spirit”.

Gregory concludes from this that if Ignatius knew an earlier form of Luke 24 that contained “phantasm”, one might imagine why Ignatius elsewhere used “daimon” for “pneuma” (spirit) — “as a way of combatting any potentially or actually docetic reading of ‘pneuma'”.

In the Greek text above one notes that Ignatius begins with a reference to Jesus coming to “those who were with Peter.” So what Ignatius narrates following is in the presence of Peter. (Contra the canonical Luke.)

Origen ascribes “a spirit does not have flesh / non sum daemonium incorporeum” to the Teaching of Peter. Origen also, as we saw in the above section, attributed the words used by Ignatius to a heretical text – not Luke.

We know that “there was a range of texts in early Christianity associated with Peter.”

Therefore it may be that the text used by Ignatius came from one of these texts or from a tradition on which they drew.

Note also that Jerome attributed the saying to the Gospel according to the Hebrews (On Illustrious Men 16, Commentary on Isaiah 18, Preface).

The significance of the date of Ignatius

Gregory writes that “Ignatius may be dated securely to c 115”. He continues:

and a strong case can be made that at this early stage there is no reason to believe that he had access to the text later canonised as Luke . . . . This would be consistent with Papias’ apparent silence about Luke . . .”

Origen and Jerome both attribute the expression used by Ignatius to “heretical” texts. Origen to “The Teaching of Peter” — which is consistent with Ignatius’ reference to Peter (unlike Luke) and his friends being present at the scene. Jerome attributes the Ignatian saying of Jesus to the Gospel of the Hebrews, although it is strange (Gregory notes) that Eusebius did not appear to see the reference there.

Moving through the second century

We know that as we advance into and through the second century more and more texts arose appearing to be rival “gospels”. We know most of these have been lost. So how safe is it to assume that Ignatius must have known either canonical Luke or another text that chance has left for us for comparison?

Gregory thus concludes with Schoedel that Ignatius is likely to have taken the expression “bodiless daemon” from a tradition apart from the text of the Gospel of Luke.

I have come across a couple of readers who have taken the table on Glenn Davis’s site as all there needs to be said about the relationships of the canonical gospels to other early Christian writings. The above discussion should hopefully alert those to the dangers of oversimplification that must necessarily accompany a choice between entering a Tick or a Cross helpful though that table is in other respects.

One thought on “Ignatius and the Gospel of Luke: In a relationship or just distant cousins?”