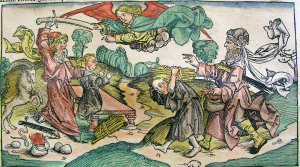 Implicit in my series of notes on Jon Levenson‘s book, The Death and Resurrection of the Beloved Son, is that the Jesus story, in particular the fact of and meaning attributed to his humiliation and crucifixion, the saving function of his blood, his pioneer role and one with whom the faithful are to identify, should not be seen as unique developments. They arguably emerged within the context of a Jewish intellectual matrix that was attributing the same sort of theology to Isaac.

Certainly some of the clearest expressions of these meanings to the binding of Isaac are found in the rabbinic literature that was penned after the destruction of Jerusalem. But the earlier delineations of these interpretations are seen as early as the second century b.c.e.. Further, many of the rabbinic passages to which Levenson refers appear to derive from the earliest period of rabbinic Judaism. This is the same period in which the Christian gospels are also most commonly dated. (There are also what I believe are strong arguments — if not widely accepted ones — that the Pauline literature also dates from the late first or early second century.)

It is therefore no stretch to postulate the Jewish and Christian theological interpretations of Isaac and Jesus emerging in tandem, perhaps even in a dialogue with each other. For me it is also interesting that Levenson places some of the radical Isaac salvation and death and resurrection theology to the circumstances of the persecution of the Jews at the time of the Bar Khoba war (early 130’s c.e.) or possibly earlier. Interesting to me because this period, and its forerunner, the first Jewish war (late 60’s c.e.), set what I believe are the most plausible circumstances and explanations for both the emergence of Christianity and the course of rabbinic Judaism. Both naturally drew on pre 70 c.e. schools of thought (and Judaism pre 70 c.e. was a far from monolithic religious and thought system), but it was surely the crises of the Jewish wars that created the conditions that led to the real beginnings of these two trees. Both Christianity and rabbinic Judaism may be seen as natural (vacuum filling) replacements of what had been lost. (I’ve hinted at one aspect of this in an earlier thought about the tomb of Jesus being born out of the destruction of the Jerusalem Temple.)

But I’m getting way ahead of myself here, and sidetracked from the arguments of Levenson. Back to the business at hand: 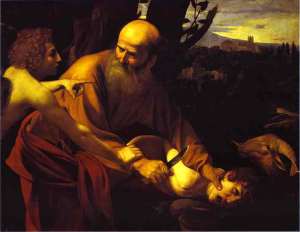 The Death and Resurrection of Isaac?

The Shed Blood of Isaac

The Mekilta de-Rabbi Ishmael notes that in the Exodus passage where God proclaims that when he sees the blood on the door posts he will pass over the Israelites inside God actually sees “the blood of Isaac” (Pisha 7). (Levenson, p.192)

The first century c.e. Pseudo-Philo in Biblical Antiquities 18:5 cryptically writes of the blood of Isaac:

And he brought him to be laid upon the altar, but I restored him to his father. And because he resisted not, his offering was acceptable in my sight, and for the blood of him [and on account of his blood] did I choose this people.

The text certainly does not say that Isaac was actually slaughtered. But what is meant by “the blood of Isaac”?

The most obvious explanation to us is that God counted Abraham’s willingness to shed Isaac’s blood as good enough as if he really had done so. This interpretation is the obvious one because it clearly conforms to the intended meaning of the original story in Genesis 22.

But Levenson prompts readers to think how often midrash ever does “conform to the plain sense of the biblical passage it interprets.”(p.193) One thinks of Paul’s interpreting the seed of Abraham to mean a Jesus Christ, a meaning nowhere implied in the original passage. James is reported to have interpreted Amos 9:11-12 (LXX) speaking plainly about a tabernacle of David being rebuilt from ruins Gentiles coming to worship there as meaning the conversion of the gentiles by the early church. The gospel of John interpreted a scripture about the bones of a sheep in a dinner recipe to mean the bones of Jesus; and the parting of garments to apply to a crucifixion despite the original passage having nothing at all to do with a crucifixion. Levenson has already shown the tendency of Jewish interpreters to change the original meanings of the story by introducing an active role for Isaac equal to that of Abraham, and for his willing offer of sacrifice to bring about the deliverance of Israel.

Against this interpretation that comes easily to us, Levenson writes (p.193):

Ancient midrash would not be ancient if it never offended modern sensibilities, nor would it be midrash if it always conformed to the plain sense of the biblical passage it interprets. . . . [our modern interpretation] fails utterly when it comes to a passage like the following:

Rabbi Joshua says: “God spoke to Moses and said to him [“I am the LORD]” [Exod 6:2]. The Holy One (blessed by he) said to Moses, “I can be trusted to pay out the reward of Isaac son of Abraham, who gave a quarter of [a log of] blood upon the altar and to whom I said:

[Let the nations not way, “Where is their God?”
Before our eyes let it be known among the nations that You avenge the spilled blood of Your servants.
Let the groans of the prisoners reach You;] reprieve those condemned to death as befits Your great strength. [Ps 79:10-11]

I am trying to bring them out of Egypt, and you say to me, “[Please, O Lord], make someone else Your agent”? [Exod 4:13] (Melkilta de Rabbi Shimon ben Yochai, Wa’era)

Here the aqedah is interpreted as being the reason God will deliver his people from Egypt, from their prison and death-row status there (Exodus 1), and the reason lets the offering of Isaac move him this way is because the blood of Isaac was spilt.

Isaac is seen as a martyr who gives his blood, so that in avenging him God may redeem his descendants from bondage and death (Levenson, p.194).

So should the earlier texts referring to the blood of Isaac be understood in the same way? If the amount of blood is a small token quantity, then it is quite within the meaning of the Pseudo-Philo and rabbinic passages above.

But Levenson notes that another rabbinic text (b. Sota 5a) seems to say that the same measure of blood is all the blood a person has.

So it is a possibility that all the above passages had in mind the actual death of Isaac.

The Ashes of Isaac

But there are some texts that speak of the ashes of Isaac instead of his blood.

(Levenson dismisses another interpretation found in the midrashim that the ashes of Isaac refer to the ram sacrificed in his stead as being very late, and an obvious attempt to undo the known view that Isaac was really burnt.)

I won’t repeat here all the rabbinic citations about the ashes of Isaac that Levenson discusses. They are similar to the ones already cited in reference to the blood of Isaac, with the same implications for salvific effect, atonement, etc.

A pedantic interpretation of Genesis 22

At a stretch we can imagine how the early Christians interpreted Jewish scriptures to apply to the church and Jesus. So Levenson supplies the stretch we need to understand how rabbis could have possibly interpreted the aqedah in a way to teach that Isaac was cut enough to shed some blood or even literally sacrificed.

Genesis 22:15 says that God called to Abraham a second time. One might take this as inferring that the first call not to harm the boy was ineffective. After all, in the second address the angel merely spells out the consequences of Abraham “not withholding his son”. So what happened between the two calls by the angel? Had Abraham cut or killed Isaac?

The clincher for those rabbis viewing the passage this way was the conclusion at Genesis 22:19:

Then Abraham returned to his servants, and they set off together for Beersheba. And Abraham stayed in Beersheba.

Ah hah! Why is Isaac not named as having returned with Abraham? Why only the servants!? “The absence of evidence not being evidence of absence” be damned! I might add (neither the rabbis nor Levenson says this) that he thought it best to move to another town to live than to go back and face his wife if he really had sacrificed their son. 😉

The Resurrection of Isaac

By the merit of Isaac who offered [hiqrib] himself upon the altar, the Holy One (blessed be He) will in the future resurrect the dead, as it is written:

[For He looks down from His holy height;
the LORD beholds the earth from heaven]
to hear the groans of the prisoner,
[to release those condemned to death.] [Ps 102:20-21] (Pesikta de-Rab Kahana, zo’t habberaka)

The idea that God would offer resurrection of the dead because of Isaac’s “offering of himself” makes best sense if he is thought to have actually offered himself to die.

The rabbis and their predecessors who appear to have interpreted Isaac as undergoing willing martyrdom, offering himself in obedience to God as a literal sacrifice, also understood that God had resurrected Isaac.

He made haste, he pinned him down with his knees,
He made his two arms strong.
With steady hands he slaughtered him according to the rite,
Full right was the slaughter.

Down upon him fell the resurrecting dew, and he revived
(The father) seized him (then) to slaughter him once more,
Scripture, bear witness! Well-grounded is the fact:
And the Lord called Abraham, even a second time from heaven.

The context of martyrdom?

“It is reasonable to suspect that the pressure of Jewish martyrdom spawned the idea that Isaac, like the martyrs of a later age, went willingly to a death that was never called off but only miraculously reversed, a sign for the martyrs to follow who now sleep in the dust.” (p.197)

The fact that this explicit idea is expressed only in rabbinic sources suggests to Levenson a terminus a quo of the persecutions of Hadrian’s time (130-135 c.e.). But he also believes that “the underlying exegetical moves may be older still.” We have traced their evolution through the late Second Temple and early Talmud formation periods.

Later rabbinic literature expressed arguments against the belief that Isaac was literally sacrificed and resurrected. The beliefs were prevalent enough among their peers for the debate to have arisen.

That Isaac was indeed sacrificed was also an idea that may have stood too close to certain Christian narratives for the rabbis’ comfort. (p.198 )