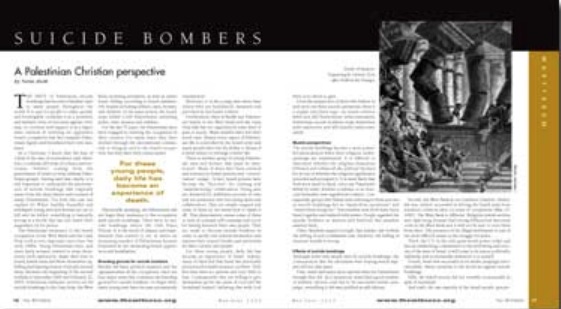 Christianity was surely up and running at least a hundred years before someone thought to assign a special day for its birthday. And one might well read the evidence in a way that indicates “orthodox” theologians hijacked Pentecost from the Jews to use it as a hostage in their campaign against “heretical” — Marcionite — Christians.

The earliest evidence we have for the story that the church began on Pentecost, some fifty days after the crucifixion of Jesus, is the Book of Acts. But before we see any evidence that anyone knew of the existence of that Book, some time in the mid-second century, not a single Christian author indicates any knowledge of Pentecost as the birth-day of the Church. Justin Martyr, our first notable Christian apologist and one who was connected with Christianity from Syria to Rome, discusses in his tracts what he knows about Jesus and the beginning of the church. He informs us that as far as he is aware the church began with the sending out of the twelve apostles after Jesus persuaded them

For after His crucifixion, the disciples that accompanied Him were dispersed, until He rose from the dead, and persuaded them that so it had been prophesied concerning Him, that He would suffer; and being thus persuaded, they went into all the world, and taught these truths. (Dialogue with Trypho, chapter 53)

So Justin, possibly as late as around 150 c.e., appears to understand that it was the persuasive powers of argument of the resurrected Jesus that catapulted the twelve apostles (not Paul) from Jerusalem into the world to preach to the gentiles. Most of what one reads by scholars about what Justin Martyr knew of our New Testament books expresses the conviction that Justin knew Acts and all our canonical gospels. That may be so but I doubt it, at least in the case of the book of Acts. If he did know the book of Acts, he is mysteriously silent about Paul, and even attributes the preaching to all the gentile world to the original twelve apostles. He is also convinced that the Roman armies invaded Judea and destroyed the Jerusalem Temple within weeks of Christ’s crucifixion. Both of these views of Justin simply fly in the face of what the book of Acts is all about. If he knew Acts he dismissed it.

The Gospel of Mark, arguably the earliest of our canonical gospels, indicates that the twelve disciples, led by Peter, were destined to be converted in Galilee after Jesus was resurrected. The original ending of the gospel (16:8 ) forces readers to focus on the fearful silence of the women who visited the tomb of Jesus. Readers are left with nothing more than a suspicion or hope that the apostles will somehow-maybe meet up with Jesus in Galilee again. Jesus had promised that the gospel would be preached in all the world, but the role of the twelve apostles in this preaching is fraught with ambiguity and uncertainty throughout the text.

The Gospel of Matthew rejects the ambivalence of this first gospel, and makes it clear that the resurrected Jesus did indeed meet up with eleven of his disciples (Judas was eliminated), and that this meeting was in Galilee, on a mountain there. Further, it was from this mountain in Galilee that Jesus sent out most of these eleven remaining disciples (Matthew says that some of them doubted that they really were in the presence of the resurrected Jesus) to the whole world. There is no Pentecost. There is no “holy spirit”. Jesus promises that he himself will be with them always.

The Gospel of John does bring in the holy spirit, but it is breathed out of Jesus’ nose onto the disciples, minus Thomas. (John does not specify if Judas was among those receiving the holy spirit.) Interestingly, Jesus links this nasal gift not with preaching to outsiders but with authority to decide what sins should be forgiven. The closest the gospel comes to any preaching mission is a concluding chapter where Peter is charged with the responsibility to “feed the flock”. The author of the Gospel of John appears to visualize apostolic activity in relation to a flock of other Christians. There is no Pentecost. If there is a starting point of the apostolic activity, it is either on the day of the resurrection when Jesus breathed on most of them, or afterwards when Jesus caught up with seven of the disciples by a seashore in Galilee.

It is only with the arrival of the Gospel of Luke and Book of Acts, joined together as a single work by prologues and certain themes such as a focus on Jerusalem and the Temple as an honourable centre and focus of the new faith, that the Pentecost birth of the church makes its introduction.

It is noteworthy that Pentecost makes this special appearance in a context of a theological debate over the relevance of the Jewish scriptures and heritage to Christianity.

Both external and internal evidence testify that the Book of Acts was written as a second century response to what our “orthodox” Christians saw as the “heretical” Marcionite challenge that began in the first half of the second century. Our earliest evidence that anyone knew of the existence of the book of Acts is from the later second century, when Irenaeus cites it. The name of Luke as the author of these works was also an invention of these later times.

Marcionite Christianity rejected Jewish scriptures as having any sort of foundational relevance to the church. To interpret the Old Testament allegorically as foreshadowing or prophesying Jesus Christ was, to Marcion, just another expression of the Judaizing heresy condemned by the apostle Paul. Marcion insisted on reading the Jewish scriptures literally. The messiah promised in the Jewish scriptures by the creator God of this world was destined to be a messiah for the Jews only. Jesus was not that messiah. He came to reveal the hitherto unknown God. Jewish scriptures and laws were irrelevant to those who worshipped Marcion’s Jesus. And it appears that Marcionite Christianity was a serious rival to what became “orthodox” Christianity. It was certainly the dominant faith in Asia Minor, and appears to have been followed throughout Syria and Greece, through to Rome.

The allegorical reading of the Old Testament secured for the “orthodox” a hoary literary and spiritual heritage worthy of the new faith. Adam and Eve were allegories of Christ and the Church. Israel itself was an allegory of the Church. But some Jewish metaphors for Israel, such as the Servant in Isaiah, were prophesies of Jesus. One can see this allegorization process at its peak in writings like the Epistle of Barnabas and the Dialogue with Trypho. Some see this treatment of the OT as nothing less than a hijacking of the Jewish scriptures that went hand in glove with the anti-semitism of the time. Marcion saw it as a Judaizing heresy.

If the Book of Acts was written to defend the “Jewish-orthodox” Christianity, with its declared roots in an allegorical reading of the Jewish scriptures, and with its coopting of those scriptures as their own (not even understood by the Jews who originally composed them), then it would appear that the Jewish Feast of Pentecost was given its fame as the birthday of the Church as part of the propaganda campaign battle between the Marcionites and the “orthodox”.

Luke-Acts gives central focus to Jerusalem and the Temple in the life of Jesus and the early church. Acts makes regular references to the importance of the synagogues and Jewish feasts, including the sabbath day, to the life of Paul. The earliest apostles preached daily from the precincts of the Jerusalem Temple.

The Jewish Feast of Pentecost as the day on which the miraculous birth of the Church occurred made its first appearance in this second century theological battle between the Marcionites and the “orthodox”. Quite likely it was constructed to affirm the Jewish “spiritual/allegorical” heritage of those Christians who saw themselves in rivalry with their Marcionite brethren.