This post continues on from It is absurd to suggest. . . . It’s about a much lesser known anti-mythicist than Goguel but I will excuse myself for that anomaly on the grounds that Goguel’s book is freely available on the web and many would have read it already. Maurice Goguel is evidently R. Joseph Hoffmann’s favourite anti-mythicist; this time we look at the man in Larry Hurtado’s corner. 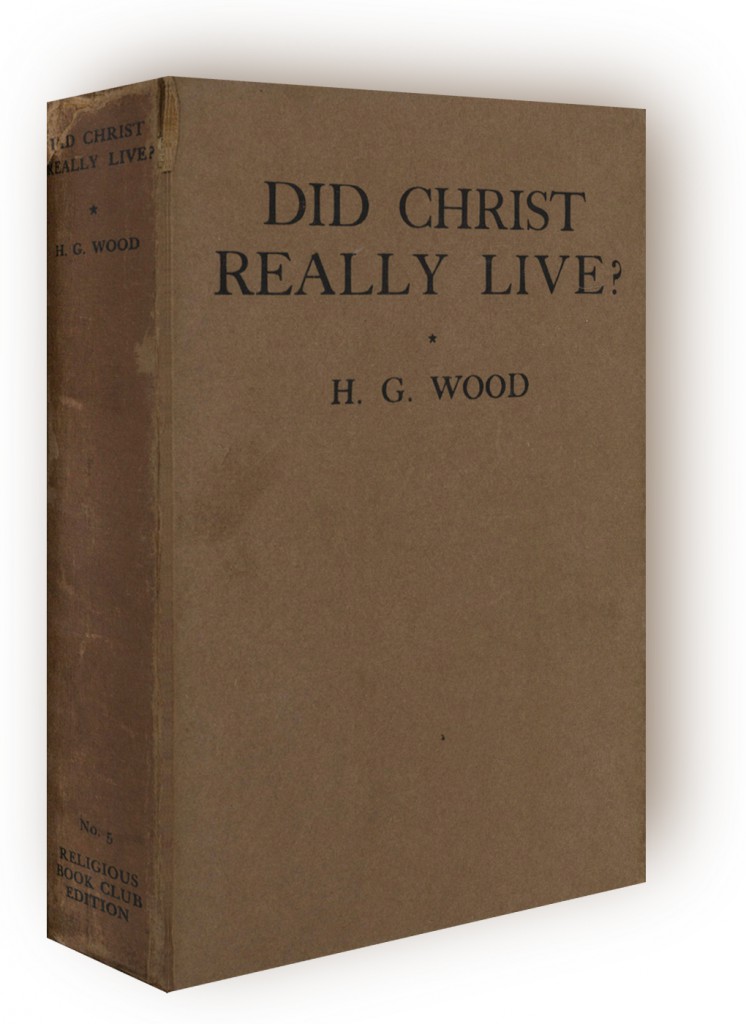 Larry Hurtado, Emeritus Professor of New Testament Language, Literature and Theology at the University of Edinburgh, turns to Herbert George Wood as the author of the once-and-for-all answer to mythicism.

But another reason for feeling it less than necessary to spend a lot of time on the matter is that all the skeptical arguments have been made and effectively engaged many decades ago. Before posting this, I spent a bit of time perusing my copy of H. G. Wood, Did Christ Really Live?, which was published in 1938. In it, Wood cites various figures of the early 20th century who had claimed that Jesus of Nazareth was a fiction, and patiently and cordially engages the specifics of evidence and argument, showing that the attacks fail.

So in one sense I think I’m not alone in feeling that to show the ill-informed and illogical nature of the current wave of “mythicist” proponents is a bit like having to demonstrate that the earth isn’t flat, or that the sun doesn’t revolve around the earth, or that the moon-landings weren’t done on a movie lot. It’s a bit wearying to contemplate! (My emphasis)

Hurtado can no more imagine Jesus being non-historical than he can imagine believing the earth is flat. He would even find the very prospect of trying to demonstrate “the obvious” “a bit wearying”. Once again we see a theologian equate his discipline with complexities and certainties found in the hard sciences like astronomy. Anyone who disputes the claims of either is a kook. (We addressed this fallacy in the first post of this series.)

Evidently Hurtado has never felt any need to update himself with mythicist arguments of today, nor even does it appear he has ever acquainted himself with any of them at any time. He read a book published in 1938 and that clearly put the whole question at rest as far as he is concerned. That book, he informs us, “engages the specifics of evidence and argument”, so what else can possibly be said?

The dedication of Wood’s book reads:

In his Preface Wood worries about young people being led astray by the Christ Myth theory of his day:

More young people than we often realize are troubled or misled by the suggestion that Jesus never lived. We cannot rightly ignore the subject. And revivals of interest in the Christ-myth are not unlikely.

In Chicago Wood visited a Russian Workers’ Club and observed the equation of the Christ-Myth idea with “any Marxist anti-God campaign” . . . .

and this book may serve as a kind of spiritual air raid precaution — a preservative against poison gas.

Recall that Goguel made it clear in his preface that he had no intention of actually engaging with the Christ myth arguments themselves. Wood begins the same way: END_OF_DOCUMENT_TOKEN_TO_BE_REPLACED