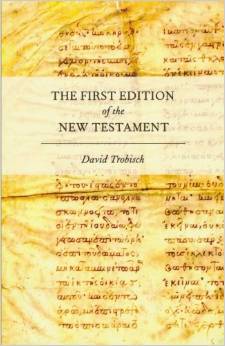 END_OF_DOCUMENT_TOKEN_TO_BE_REPLACED

I’m currently reading The Myth of Persecution: How Early Christians Invented a Story of Martyrdom, by Candida Moss. (See her Wikipedia entry for her credentials and links to several reviews of The Myth of Persecution.) One aspect of her discussion of Polycarp’s martyrdom struck me more than the details alerting us to the fictional elements of the account, and that was the evidence suggesting our account of his death was composed a hundred years later than commonly thought.

One piece of evidence is the sub-narrative about Quintus, a clear foil for the true martyr, Polycarp. Of Quintus we read:

Now one named Quintus, a Phrygian, who was but lately come from Phrygia, when he saw the wild beasts, became afraid. This was the man who forced himself and some others to come forward voluntarily [for trial]. Him the proconsul, after many entreaties, persuaded to swear and to offer sacrifice. Wherefore, brethren, we do not commend those who give themselves up [to suffering], seeing the Gospel does not teach so to do.

Quintus was one who rushed to martyrdom. He believed Christians should actively seek out martyrdom. Yet his position is shown to be a complete sham once he confronts reality, and he departs the faith instead.

Some years after the death of Polycarp, around the turn of the third century, voluntary martyrdom became an issue in the early church. Clement of Alexandria, for instance, a Christian philosopher and teacher in Egypt, argued that those who rushed forward to martyrdom were not really Christians at all, but merely shared the name. (p. 101)

It may be significant, too, that Quintus is singled out as a Phyrgian. It was in Phrygia that the anarchic Montanist movement began from around 168 CE. The Montanists were notorious for their wild prophetic utterances and zealous seeking of martyrdom.

The problem of suicidal volunteering for martyrdom was a phenomenon of the late second and third centuries. Polycarp was supposed to have been martyred 155 CE. END_OF_DOCUMENT_TOKEN_TO_BE_REPLACED 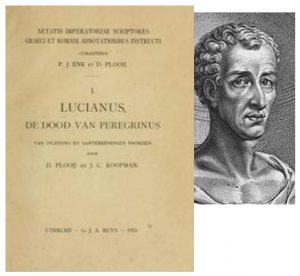 My theory can explain too, why the name ‘Ignatius’—with a single questionable exception to be considered shortly—is nowhere to be found in any second-century Christian writings outside of the letter collection itself. END_OF_DOCUMENT_TOKEN_TO_BE_REPLACED

This post is a continuation of Solving a Puzzle (or four) in the Letters of Ignatius: The Christian Years of Peregrinus

That letter is the letter to Polycarp, and although it was written at the same time as the letters to Philadelphia and Smyrna, it differs from them in several significant particulars. As will be seen, these differences are the clue to its true character.

Solving the many puzzles of this letter will confirm that the would-be martyr was indeed being led to Antioch, not Rome.

The Letter to Polycarp

Polycarp is identified as the bishop of Smyrna in the letter addressed to him but, strangely, not in the letter to the Smyrneans that was written at practically the same time.

. . . one would never guess that the two men had just parted.

The prisoner wrote the two letters just a short while after his departure from Smyrna, having visited with Polycarp and his church during his stop there. Yet, from the kind of advice contained in the first five chapters of the letter to Polycarp, one would never guess that the two men had just parted. One could legitimately wonder why they didn’t discuss the material in those chapters when they talked face-to-face presumably just days before. And the advice to Polycarp regarding his responsibilities to the members of his church who are widows, or married, or slaves (IgnPoly 4 & 5) looks like advice for a newly installed bishop.

It looks like most blessed Polycarp has been forced into a text where he was not originally present.