One of the reasons I am interested in this topic of visionary experiences is that they help flesh out a tangible environment, on the basis of concrete evidence, from which Christianity emerged. This is in contrast to the model of “oral traditions” being the roots of the canonical gospel narratives. The gospel narratives stand at an opposing polarity from the idea of salvation through a heavenly vision of the divine. April DeConick’s book, Voices of the Mystics, around which this and my previous posts are put together, argues that in the Gospel of John we find strong indications of a debate with Thomasine Christians who did uphold a central importance of the visionary experience. (Note, for example, the criticism of Thomas for believing only because he has seen.)

Enochian traditions in the Synoptic Gospels

But there is a somewhat different story and approach to visions in the synoptic gospels (Matthew, Mark and Luke).  END_OF_DOCUMENT_TOKEN_TO_BE_REPLACED 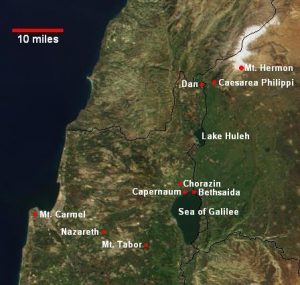 In both 1 Enoch and the Gospel of Mark the location of God’s revelation is in Galilee, and especially upper Galilee in the Tel Dan region extending through Caesarea Philippi to Mount Hermon. It was outside Caesarea Philippi that Jesus was acknowledged as the Christ, and at a nearby mountain where he was transfigured.

In both books, this northern location that has long been associated with sacred sites of Jewish and pagan origin is set in opposition to the earthly and corrupt priesthood and Temple system based at Jerusalem.

It may not be insignificant that in the Hebrew scriptures, Dan (part of this region), is regularly associated with apostasy from the faith centred at the Jerusalem Temple and priesthood.

(I would not normally have thought of this region as strictly “Galilee” but I am using the term as used by George W. E. Nickelsburg in his 1981 JBL 100/4 article, “Enoch, Levi, and Peter: Recipients of Revelation in Upper Galilee”, on which this post is based.)

The Galilean setting of Enoch’s vision and the fallen angels

7. And I went off and sat down at the waters of Dan, in the land of Dan, to the south of the west of Hermon: I read their petition till I fell asleep. 8. And behold a dream came to me, and visions fell down upon me, and I saw visions of chastisement, and a voice came bidding (me) I to tell it to the sons of heaven, and reprimand them. 9. And when I awaked, I came unto them, and they were all sitting gathered together, weeping in ’Abelsjâîl [Abel-Maîn], which is between Lebanon and Sênêsêr [Senir], with their faces covered.

So Enoch delivered his message of judgment against the fallen angels seven kilometers from Dan, at Abel beth Maacah: END_OF_DOCUMENT_TOKEN_TO_BE_REPLACED