Some of the most sensible words I have read about the Gospels are in a 1954 lecture by Ernst Käsemann. Käsemann makes no strained attempt to “explain” how similar the Gospels are to “history” or “biography”. Rather, he works with what we all can see as plain as day: the Gospels are what some scholars have called “faith documents”: they are written to support faith in Jesus Christ as the Son of God and Saviour of “the world”. They are written like, well, books of the Bible. Believe or die.

History is only comprehensible to us through interpretation. Mere facts are not enough.

Rationalists, for example, have sought to show that Jesus was an ordinary man like us. That’s all the facts allow us to acknowledge.

Supernaturalists, on the other hand, have sought to show that Jesus is a “divine man” who performed real miracles. The facts allow us to believe nothing less.

But what is the point of either view? If Jesus were an ordinary man like us, so what? Did not Schweitzer show that each scholar saw in that mere man a life just like his own? This observation is said to have effectively put a hold on historical Jesus research in many quarters.

And if the facts told us Jesus really did perform miracles and even rose from the dead, then in what way would he be any different from other lives embedded in other religions that also wielded supernatural powers?

No one has ever been compelled (in the true sense) to make his decision between faith and unbelief, simply because someone else has succeeded in representing Jesus convincingly as a worker of miracles. And nothing is settled about the significance of the Resurrection tidings for me personally, simply because the evidence for the empty tomb has been shown to be reliable.

The handing own of relatively probable facts does not as such provide any basis for genuinely historical communication and continuity. (Käsemann, “The Problem of the Historical Jesus” in Essays on New Testament Themes, p. 19)

And it is here where Käsemann’s insight into the nature of the Gospels makes several modern studies look embarrassingly myopic. END_OF_DOCUMENT_TOKEN_TO_BE_REPLACED 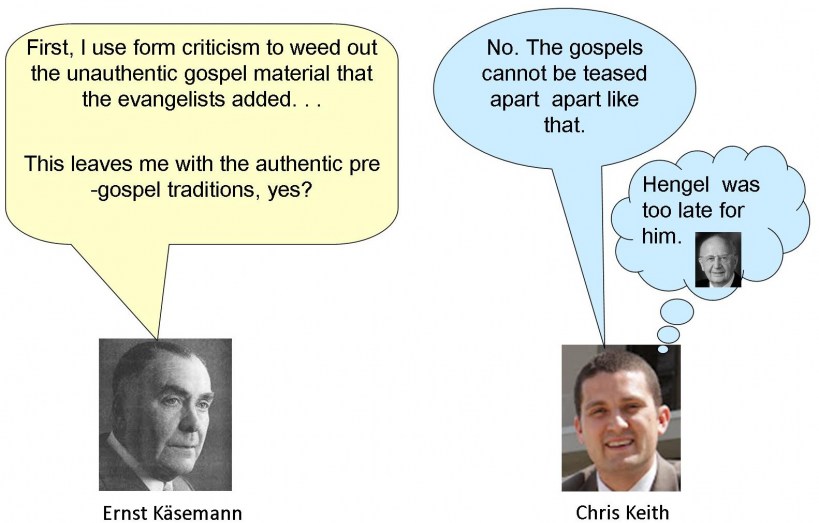 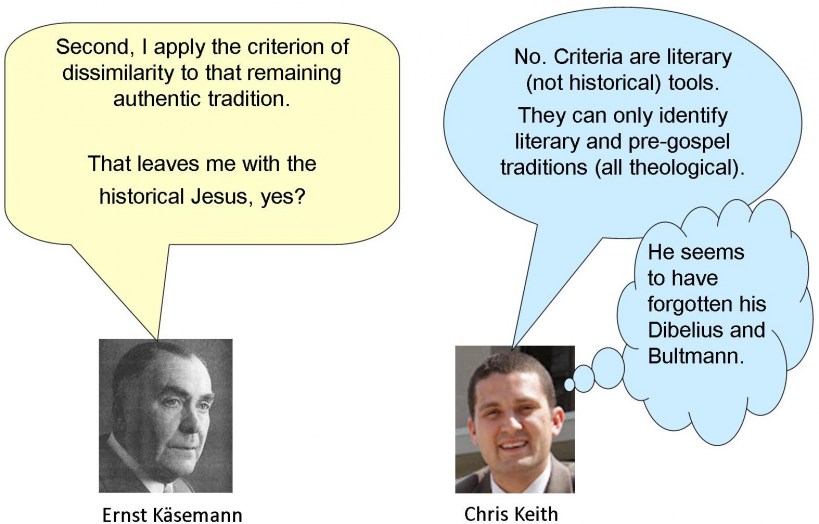 The above exchange is the message of Chris Keith’s opening chapter of Jesus, Criteria, and the Demise of Authenticity. My “idiot’s guide” is a tad unfair to Käsemann, however, since he did have willing accomplices and Keith mentions Norman Perrin and Reginald H. Fuller as guilty of formalizing more criteria of authenticity. The above may also be unfair to Morna D. Hooker whose arguments Chris Keith is supporting. But this post is about what I see as the good, the interesting and the missed opportunity in Keith’s chapter, so he gets the starring role above.

The title of this chapter is “The Indebtedness of the Criteria Approach to Form Criticism and Recent Attempts to Rehabilitate the Search for an Authentic Jesus”.

In the first part of this chapter Keith shows how the criteria used by historical Jesus scholars (criteria of embarrassment, of multiple attestation, of coherence, of dissimilarity, etc.)

After discussing this and briefly the second part of this chapter I will conclude with a return to Anthony Le Donne’s arguments for “triangulation” and “memory refraction”, this time with another critic’s more positive evaluation, than I raised in a recent post.

But before getting into the detail of the chapter here is my explanation of the “cartoon” above: END_OF_DOCUMENT_TOKEN_TO_BE_REPLACED